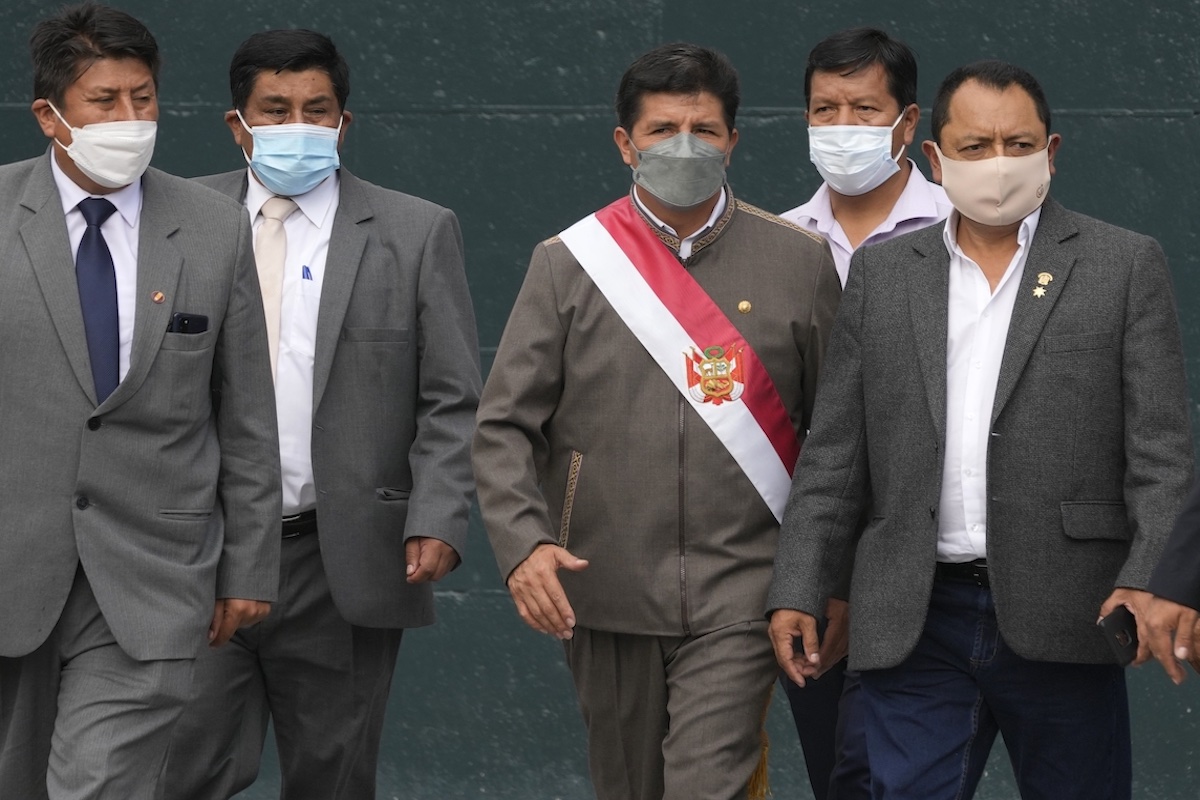 Peru’s President Pedro Castillo, center, surrounded by his party´s congressmen leaves Congress where lawmakers voted to go forward with proceedings on whether or not to impeach Castillo in Lima, Peru, Monday, March 28, 2022. (AP Photo/Martin Mejia)

Castillo, a political neophyte who shook the country when he defeated the political elite to become president, survived his second impeachment attempt. He characterized the accusations against him as speculation and argued that none could be substantiated.

The votes of at least 87 of the 130 lawmakers were needed to remove the president. Fifty-five voted in favor, 54 against and 19 abstained.

“I salute that common sense, responsibility and democracy prevailed,” Castillo tweeted after the vote. “I recognize the lawmakers who voted against the vacancy, and I respect the decision of those who did. I call everyone to turn this page and work together for the great challenges of the country.”

The lawmakers seeking to remove Castillo had noted he is the subject of three preliminary investigations into possible corruption, which under Peruvian law cannot proceed until he is out of office. There is also a separate accusation from a would-be collaborator who alleged he is part of a criminal group that receives money in exchange for public works.

The lawmakers accused Castillo of “permanent moral incapacity,” a term incorporated into Peruvian constitutional laws that experts say lacks an objective definition and that Congress has used six times since 2017 to try to remove presidents.

“We only found comments without any corroboration, speculation, imaginary links,” Castillo said of the accusations while reading a speech before lawmakers hours before the vote.

While Castillo remains in office, the latest move against him will add to Peru’s political turmoil and weaken the president, who won office with just 44,000 more votes than his opponent in a runoff election. He was an underdog when he entered the race last year and initially campaigned on promises to nationalize Peru’s crucial mining industry and rewrite the constitution.

From the start, Castillo, a rural schoolteacher in a poor Andean district, has been handicapped by his Cabinet choices, a number of whom have been accused of wrongdoing. So has his former private secretary, whose corruption investigation led the prosecutor’s office to find $20,000 in a bathroom of the presidential palace.

“Recent developments have confirmed Peru’s dysfunctionality, regardless of who is in power,” said Claudia Navas, an analyst with the global firm Control Risks. “These events will certainly exacerbate Peruvian’s frustration towards the political system, which represents a risk because they will be willing to support an authoritarian leader as a desperate measure to overcome protracted political instability.”

Peru’s unicameral Congress is deeply fragmented among 10 political parties and rarely can come to any consensus on passing legislation. Castillo’s party is the biggest faction, but it has only 37 seats, and opposition members lead key committees.

The government invited three officials from the Organization of American States to witness the debate. Lawmakers allowed them to watch it from a nearby building.

Castillo succeeded Francisco Sagasti, who was appointed president by Congress in November 2020 as the country cycled through three heads of state in one week amid confrontations that left two people dead and more than 200 injured.

“Vacating presidents has become a sport,” said centrist lawmaker Wilmar Elera, who recalled that President Martín Vizcarra was dismissed by Congress in 2020 for permanent moral incapacity but has not faced any charges since.

Congress and Castillo are both unpopular in Peru, although the disapproval of legislators is greater. A survey by the Institute of Peruvian Studies published in March by the newspaper “La República” said Congress’ disapproval rate was 79%, while 68% had negative views of Castillo.

The debate over Castillo’s future came just as the country awaited the release from prison of former President Alberto Fujijmori, who was ordered freed earlier this month in a controversial decision by Peru’s highest court. He was serving a 25-year sentence for his role in more than 20 murders during his administration between 1990 and 2000.

Peru has also been seeing demonstrations across the country in recent days to protest prices for food, fuel and fertilizer.

She said the country is in need of a “comprehensive political reform” that promotes public participation and “strengthens the rules for political parties’ internal consultations to elect their candidates.”

“Measures to ensure the suitability of those holding political power are also required,” Navas said. “A reform is also needed to introduce clear criteria for Congress to impeach a president on the grounds of ‘moral incapacity.’”