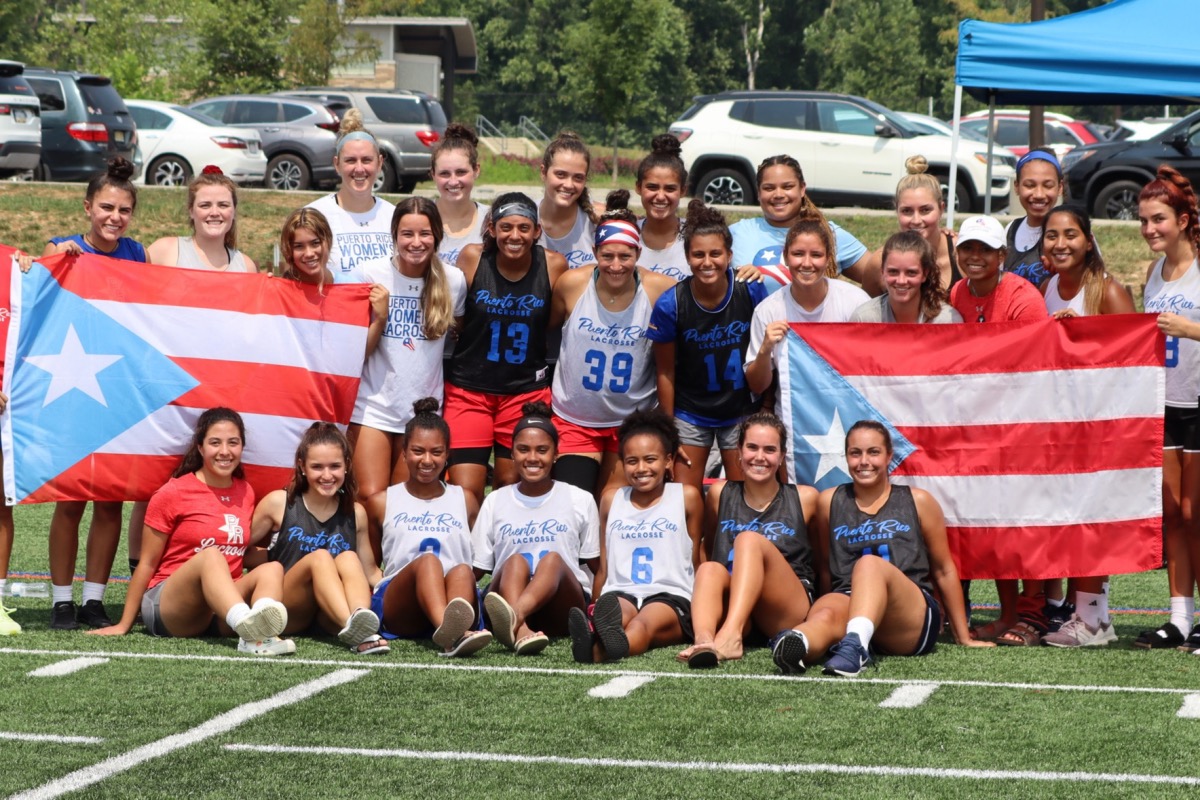 The 2022 Puerto Rico women’s senior national lacrosse team, which will compete in will participate in the World Championship at Towson University in Maryland, from June 29 to July 9, 2022. (Courtesy of Puerto Rico Lacrosse)

Lacrosse is the oldest organized sport in North America, according to Lacrosse and Its Greatest Players. While tracing its origins to a game played by Native American tribes around the Great Lakes and eastward, as with most things in today’s Western world, lacrosse is currently dominated by white men.

In 2013, the New York Times reported that less than two percent of lacrosse players were Black.

Lacrosse is also a sport for the affluent. A Samford study in 2018 revealed that around 60 percent of the spending on lax gear came from people with salaries of $100,000 or more.

To help alter the face of the sport as we know it, Puerto Rico Lacrosse, founded in 2015, is one of the many grassroots organizations that have sprouted in recent years, as more Latinos and other people of color find creative ways to increase their involvement. Puerto Rico Lacrosse has players scattered throughout the United States, including Texas, Arizona, New York, New Jersey, Florida, Pennsylvania, and Massachusetts.

This interview has been edited for length and clarity. 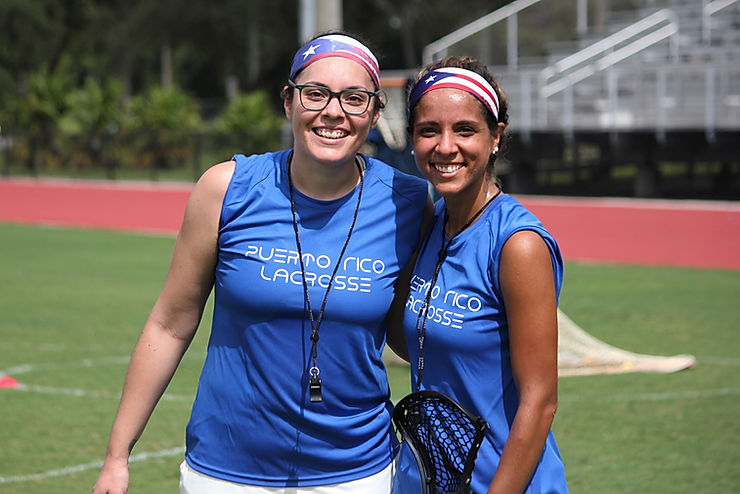 We know baseball, basketball, and boxing are the biggest sports in Puerto Rico, and lacrosse is generally a white, affluent sport. What were those early days and early challenges like, as far as budget and support?

We’re fully self-funded. We’re trying to get revenue streams and figure out ways to get money and sponsors. I know when the men’s national team competed, their World Championships were in Israel. They’re all essentially self-funded. Our U19 team, we got some individual sponsorships in, but again, that was self-funded. Looking at our next World Championships this summer, we don’t want cost to be a barrier to be a part of this organization because that’s what stops Latinos and minorities in general from playing lacrosse, period.

That’s where we’re at now because we need to continue to build it on the island, making sure that once we do that, it’s not like, ‘OK, well, now you’ve learned lacrosse, now you love it, but now you can’t be on the national team because you can’t pay for it.’ We’re doing everything that we can to bust our ass to get sponsorships. We’re not getting paid; we’re fully a volunteer board, staff, all of that. It’s really just kind of a labor-of-love passion project that we’re all doing because we grew up as lacrosse players that were the only Puerto Ricans, or anytime we tried to play at a high level or play at the next level, there were all these extra barriers. We want to be the people that are helping break those barriers and get more Puerto Ricans, more Latinos in general, playing.

I feel like you obviously can get that support, but you also have to reprogram people to be like, ‘Hey, this is lacrosse. This isn’t big in our culture yet.’

Yeah, I think the first thing is that lacrosse is a very different sport from baseball. It’s more exciting, and once people see it —while they may not necessarily understand what they’re watching— it is very fast-paced and exciting. You have the physicality of rugby, football, or hockey, but then you also have the athleticism of basketball in there as well. I think exposing kids at a young age and getting them excited is really the way to go.

And in terms of building that support system and overcoming barriers so that this isn’t always a labor of love, how’s that process unfolding?

It’s a different level of pride that you have when you’re wearing Puerto Rico across your chest because we are very prideful people. I think that was an immediate buy-in from all our families, the families of our players, and at the U19 World Championships, we had a very large crowd because we had a lot of fans that were coming in. My parents drove from Chicago up to Canada and were there for the entire tournament because that’s who they are. They wanna wave the flag and show that we can do this at this stage, too. You heard the tambourine, the drums. Everybody was talking about the Puerto Rican fan band. You might not know what’s going on exactly but when you see somebody wearing Puerto Rico and wearing that single star, it hits different!

You mentioned to me previously about wanting kids involved through physical education classes, like lacrosse class during a season once or twice a week. Are you close to achieving that?

We do have an island development committee that’s working on a lot of those different components. I know that one of the committee members is on the island, and they’ve had several meetings with schools. COVID has obviously thrown a wrench in stuff. We were supposed to start a Spring League in 2020; obviously, that didn’t happen. (laughs) We’ve done some video lessons for P.E. teachers. We’ve gone down to expos. That is the goal, to add it to the curriculum, to have it in the P.E. classes, and then start a mini little league where kids can actually play, too. And I know that we are in conversations with a couple of schools.

As we celebrate National Girls and Women in Sports Day, Arielle Ramírez reflects on the sisterhood she has found with Puerto Rico Lacrosse #NGWSD #YoSoyBoricua 🇵🇷🥍 pic.twitter.com/SUeN5nthLJ

You have three world events this year: the Women’s Senior team is playing in the World Championships in Maryland, the Men’s Senior team has a World Championship qualifier in Colombia, and the U21 Men’s World Championships are in Ireland. First, could you explain the significance of being able to compete in these competitions, especially for people who don’t follow lacrosse—why does it matter? And second, what are you guys hoping to accomplish out there? What in your mind would make these trips successful for the future of Puerto Rico Lacrosse?

We’re just really excited to compete to our fullest level and capability, and also making sure that Puerto Ricans are here. We’re serious about it! Whether it’s stateside or whether it’s on the island, [we want to show people that] we’re really proud of what we do and that lacrosse and teams that play lacrosse can look like us, no matter how the tournament plays out. Of course, you always wanna win. You wanna do well, and you wanna perform well, but I think it really is: before every game, they play the National Anthem, we walk in opening ceremonies, we have all of these different things. Being able to say our chants on the field, being able to build those relationships with other lacrosse players around the world is just extremely exciting.

But also helping to gain more exposure, to get more examples for Puerto Ricans on the island as well as part of the diaspora to say that they can play lacrosse. Lacrosse hotbeds are also in places where there are a lot of Puerto Ricans, whether it’s Connecticut, New York, New Jersey. Those are very popular places for Puerto Ricans to be in. I think that if we can figure out ways to shine a light on the athletes we have so that other people can see, I think that’s really the true goal, to be those role models.

Sometimes I say I’m jealous of the athletes that I coach because I never got this experience, and I think that if I would’ve had the teammates like this or the mentors like this or the exposure, how differently things could have potentially been for me. But I’m just extremely thankful that I have the opportunity to be here and provide that and pave the way for the future of Puerto Rican lacrosse players.