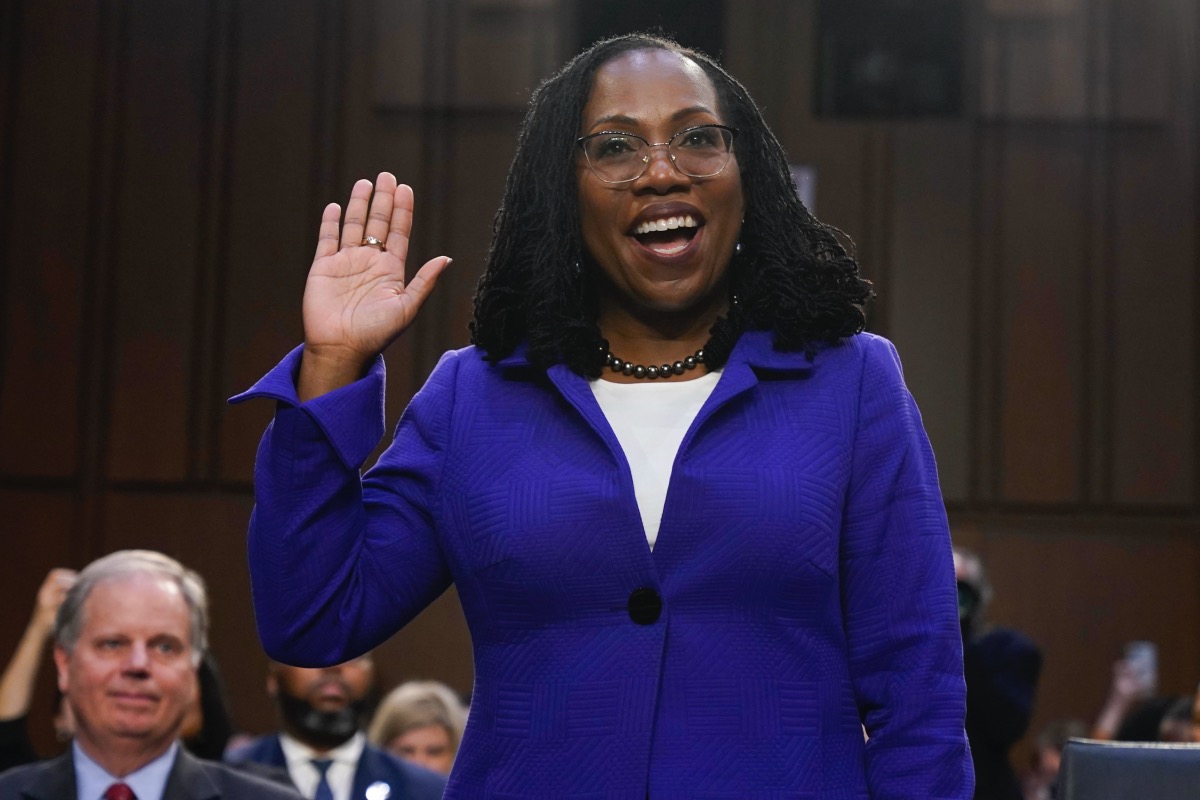 Judge Ketanji Brown Jackson, whose nomination to the Supreme Court was confirmed by a 53-47 vote in the Senate on Thursday, April 7, 2022. (AP Photo/Jacquelyn Martin, File)

Goodman, the most famous of the dozens of law enforcement officers who saved the Capitol building from thousands of MAGA insurrectionists on January 6, 2021, gripped the lapels of his suit jacket as Sen. Schumer spoke from the podium before the vote.

“Is he praying?” asked a press colleague for a Christian outlet seated beside the Latino Rebels correspondent in the press gallery.

Durbin’s hands were folded to his face. His eyes closed. His lips moved. It sure looked like he was praying.

“I can’t say that I was praying, other than to hope that everybody showed up!” Durbin laughed when asked by Latino Rebels after the vote.

As chair of the committee charged with conducting confirmation hearings, the senior senator from Illinois was the master of ceremonies in what became a toxic indictment of Jackson’s character by some of the committee’s Republican members.

“It’s rare that the Senate Judiciary Committee considers a Supreme Court vacancy and to be able to fill that vacancy in a timely fashion with a quality candidate who broke down a racial barrier,” said Durbin. “I’m really proud of the committee and certainly proud of the nominee.”

Members of the Congressional Black Caucus lined the back of the Senate chamber. Rep. Cori Bush, a progressive freshman phenom from St. Louis, Missouri, sat with her left shoulder touching a Senate page tending the door of the Democratic cloakroom.

Throughout the speech and during the roll call vote to confirm Judge Jackson that followed, white staffers exiting the cloakroom obstructed Bush’s view of the dais where Vice President Kamala Harris presided over the final vote to confirm the first Black woman to the U.S.. Supreme Court.

Confirming diverse judges has been a priority for the Democratic majority in the current Senate. For President Joe Biden, it is a campaign promise that, by all accounts, the White House has delivered on with Senate’s help.

Of the 58 Senate-confirmed federal judges since Democrats took the majority in 2021, three-quarters have been women and two-thirds have been people of color.

“And it’s not just racial and gender diversity that matters,” said a staffer in leadership. “We have strived to lift up judges that bring diversity through their experience, like more public defenders in our courts, more civil rights lawyers, more election lawyers.”

Tears flowed freely down Sen. Cory Booker’s (D-NJ) face as he voted “YES!” for the final confirmation of Judge Jackson.

Sen. Tammy Duckworth (D-IL) stood up from her wheelchair. “AYE!”

Another white staffer exited the cloakroom, blocking Rep. Bush’s view for a moment, before walking down the aisle to deliver a document to Sen. Patrick Leahy (D-VT), another powerful committee member who championed Judge Jackson’s Supreme Court nomination.

Sen. Rand Paul (R-KY) was nowhere to be found, delaying the alphabetical roll call vote by about 20 minutes before Schumer returned to the podium to resume the Senate confirmation.

As senators awaited Rand Paul's vote, VP Kamala Harris took out 2 pieces of VP stationery paper & handed them to Sen. Cory Booker & told him to write a letter to a young Black woman in your life to mark this day in history. "I thought it was a beautiful gesture," Booker told @AP

Sen. Bernie Sanders (I-VT) voted and quickly exited the chamber, stopping to shake hands with Sen. Jon Tester (D-MT), before shuffling past Rep. Bush and the other female members of the House Black Caucus standing at the back of the chamber.

Sen. Lindsey Graham (R-SC) showed up late, giving a thumbs down to the confirmation from the back of the chamber that to some press colleagues seemed like a twisted tribute to the Senator’s political benefactor, the late Sen. John McCain (R-AZ), who voted down with his thumb a 2017 bill that would’ve repealed Obamacare.

Vice President Harris, presiding over the vote from the dais, finally called out the final roll call. By a vote of 53-47, the Ayes had made history: Ketanji Brown Jackson was confirmed.

The Senate chamber erupted in a standing ovation that crescendoed into a reverent roar.

Romney was the only Republican senator to join the ovation when the first Black woman justice was finally confirmed.

Sen. Joe Manchin (D-WV) walked over to the Republican side of the aisle to give Romney an enthusiastic handshake as Sen. Tim Kaine (D-VA) replaced Vice President Harris on the dais.

Sources tell Latino Rebels that McDonough is still undergoing treatments for advanced cancer while working remotely in her capacity as the Senate’s top advisor.

“This is the fullest I’ve seen the chamber since before the pandemic,” said a broadcast colleague in the press gallery.

Outside the chamber, members of the Black Caucus gave speeches as Democratic Senate staffers hugged, fist-bumped, and high-fived each other. The mood was almost festive for a Congress that began with a deadly assault on the Capitol Building in a failed attempt to reverse a presidential election in favor for former President Donald Trump, many of whose supporters openly preached white supremacy.

The excellence of American diversity was celebrated a Black woman had won the day.