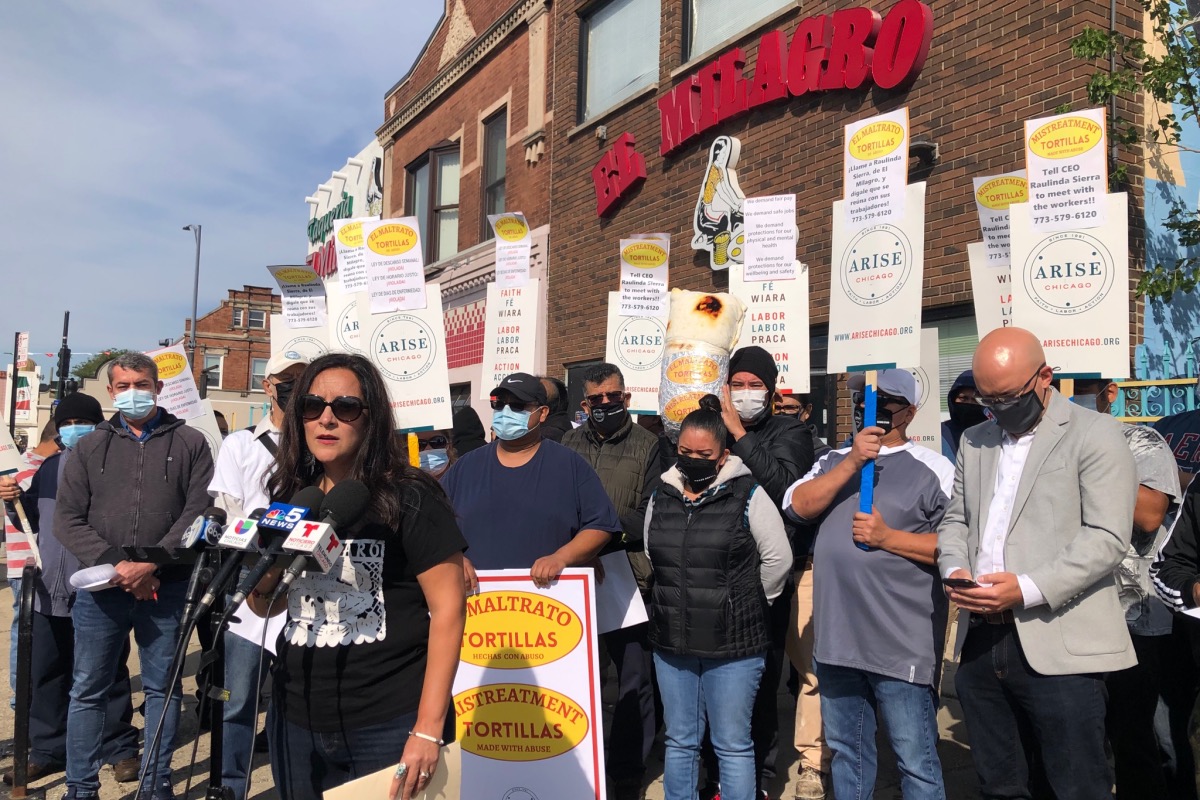 CHICAGO — The El Milagro workers began organizing in the summer of 2021 with the help of Arise Chicago. On September 23, the workers walked out of the tortilla factory in protest of unsafe and unfair working conditions. They held a Día de los Muertos vigil on November 2nd for five coworkers who died after getting infected with COVID-19 on the job.

Then, on Monday, April 11, the workers at El Milagro announced several campaign victories, which include wage increases totaling approximately $1.3 million, anti-sexual harassment training for managers, and air conditioning in the lunchrooms. But not all of their demands have been met.

Congrats to the #ElMilagro workers who have earned over $1.3Million in wages increases since organizing w/ Arise Chicago! But the struggle continues. Workers are still fighting for safe conditions & meetings w/ management. #solidarity pic.twitter.com/HcrxKb7AAd

Pedro Manzanares, an 18-year veteran El Milagro worker, says he doesn’t feel the company is listening to their petitions. “We have delivered several letters. They still won’t meet with our committee,” he said.

Six months earlier, the tortillería promised to change worker schedules and provide more days off, but they yet to follow through.

“We have hesitated to combat lies about our company as we are private and that is not our way,” the company said in a statement. “El Milagro has been listening and working since early 2021 to review wages and benefits, and instituted wage increases last summer, not because of Arise or any other outside source. The pay increase happened six months ago. We are not here, however, to argue with those who spread misinformation and outright lies.”

The 70-year-old company says they are having productive conversations with their employees as part of an inclusive process, but they will not “stand by when bullied and attacked by outside agitators.”

Arise Chicago, a group that “fight[s] workplace injustice through education, organizing, and advocating for public policy changes,” has been consulting the workers at El Milagro in their labor dispute with management.

The group stresses that it is not leading the workers in their dispute, merely informing them of their options.

“We’re part of this movement that’s a part of the labor movement but is a little bit different in that we work primarily with non-union workers,” Arise Chicago’s director of communications and development, Shelly Ruzicka, told Latino Rebels in October. “We’ve been around for 30 years. Workers know us. We’re really well known in the Polish and Spanish-speaking communities.”

“Our model is not a social service model,” she added. “We want people to know their rights and learn how to take action themselves.”

During the pandemic El Milagro workers worked under strenuous conditions, lost co-workers, & yet they still showed up. After months of organizing, they secured higher wages, in addition to better and safer working conditions. When workers fight, our community wins. ¡Sí Se Puede! pic.twitter.com/yTkdSd1kDS

The timing of the announcement from the El Milagro workers, as well as the statement from the company, is significant. This week is Semana Santa, Holy Week, eight days on the Christian calendar beginning with Palm Sunday and ending on Easter.

El Milagro itself holds special significance among Mexican Catholics. The name is a reference to “El Milagro del Tepeyac,” the story of the Virgin of Guadalupe’s four appearance before the Chichicmec peasant, Juan Diego, on a hill on the outskirts of Mexico City in December 1531. Inside El Milagro restaurants, there are shrines to la virgencita, and in December, El Milagro hosts mariachi bands to celebrate the mother of Mexican Catholicism.

The employees of El Milagro are diverse and include immigrants from Guatemala, Venezuela, and Colombia, but the workforce is predominantly Mexican Catholic. So why would the workers turn on a company that celebrates them?

Pedro says it’s because the discrepancies at El Milagro are more than just economic—they’re spiritual. El Milagro celebrates la virgencita in its iconography, while simultaneously forcing its employees to work on holy days. Pedro has missed Semana Santa all 18 years he’s worked at El Milagro.

Recently, El Milagro posted signs with a Bible quote in employee areas. The quote is from Exodus 14:14: “The Lord will fight for you, and you have only to keep still.”

Pedro views the signs as a manipulation of his religion. He believes El Milagro posted the quote to convince the workers that they should not organize but leave their fate in God’s hands.

Pedro would gladly attend Mass so that he can pray for better working conditions at El Milagro, but as he told Latino Rebels: “I have worked for El Milagro for nearly 20 years and never had Sundays off.”

Arturo “Tootie” Alvarez is based in Chicago. He trucks. He writes. Not at the same time. Twitter: @TootieAlvarez