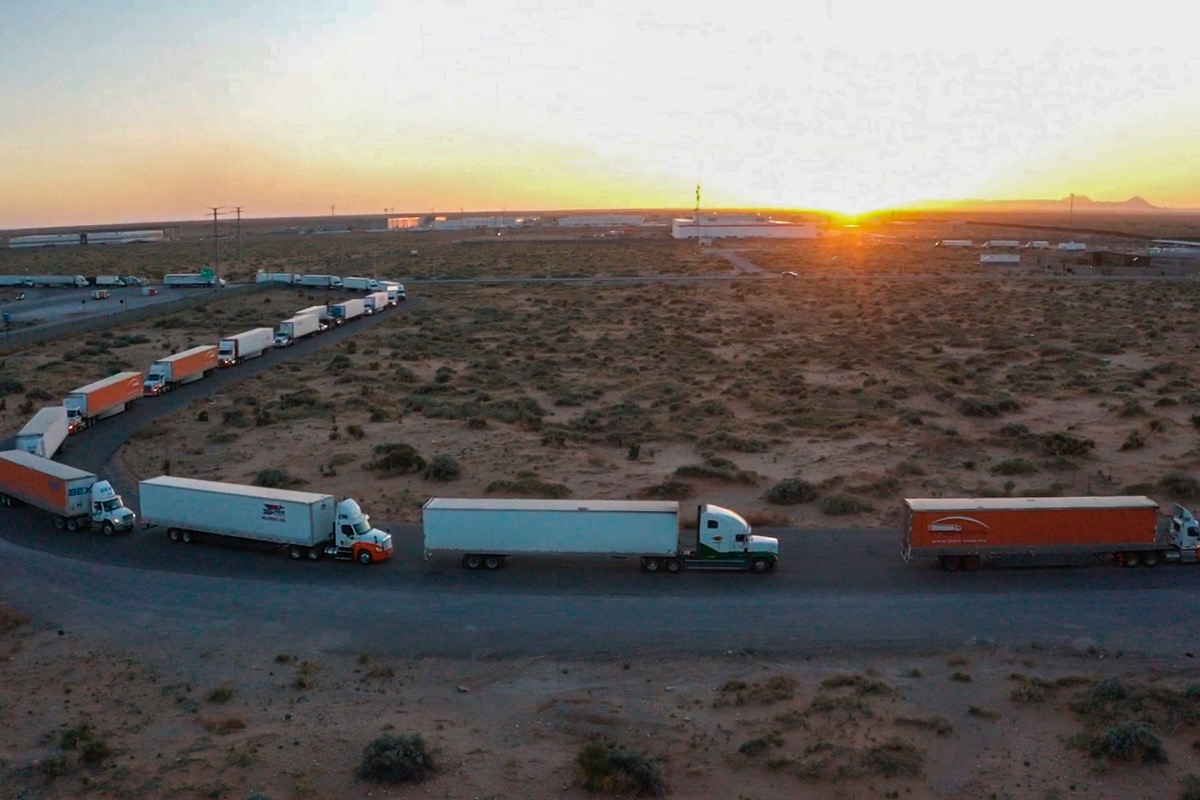 Truckers block the entrance into the Santa Teresa Port of Entry in Ciudad Juarez going into New Mexico on April 12, 2022. The truckers blocked the port as a protest to the prolonged processing times implemented by Gov. Abbott which they say have increased from 2-3 hours up to 14 hours in the last few days. (Omar Ornelas /The El Paso Times via AP)

The Mexican government said that Abbott’s order was causing “serious damage” to trade, and that cross-border traffic had plummeted to a third of normal levels. On Wednesday, White House spokeswoman Jen Psaki called Abbott’s order “unnecessary and redundant.”

The gridlock is the fallout of an initiative that Abbott says is needed to curb human trafficking and the flow of drugs. Abbott ordered the inspections as part of “unprecedented actions” he promised in response to the Biden administration winding down a public health law that has limited asylum-seekers in the name of preventing the spread of COVID-19.

But critics question how the inspections are meeting Abbott’s objective, while business owners and experts complain of financial losses and warn U.S. grocery shoppers could notice shortages as soon as this week.

Frustration is also spreading within members of Abbott’s own party: Texas Agriculture Commissioner Sid Miller, a Republican, called the inspections a “catastrophic policy” that is forcing some trucks to reroute hundreds of miles to Arizona.

“I do describe it as a crisis, because this is not the normal way of doing business,” said Hidalgo County Judge Richard Cortez, whose county includes the bridge in Pharr. “You’re talking about billions of dollars. When you stop that process, I mean, there are many, many, many, many people that are affected.”

The shutdowns and slowdowns have set off some of the widest backlash to date of Abbott’s multibillion-dollar border operation, which the two-term governor has made the cornerstone of his administration. Texas has thousands of state troopers and National Guard members on the border and has converted prisons into jails for migrants arrested on state trespassing charges.

Abbott warned last week that inspections would “dramatically slow” border traffic, but he hasn’t addressed the backups or port shutdowns since then. The Governor planned a press conference for Wednesday afternoon in Laredo.

In a video posted to Instagram, Nuevo Leon Gov. Samuel García said he planned to meet with Abbott on Wednesday and reassure him that “he has no reason to worry over drugs, nor migration.” The video showed aerial shots of the Colombia port of entry upriver from Nuevo Laredo and images of Mexico authorities inspecting trucks. He said Mexico would implement “specific checkpoints” on Thursday “to show that there is not a single trailer carrying any of the two issues that we know worry him.”

The disruptions at some of the world’s busiest international trade ports could pose economic and political threats to Abbott, who is seeking a third term in November. Democrat Beto O’Rourke, the former presidential candidate who is running against Abbott, said during a stop in Pharr on Tuesday that the inspections were doing nothing to halt the flow of migrants and were worsening supply chain issues.

He was joined by Joe Arevalo, owner of Keystone Cold, a cold-storage warehouse on the border. He said that although Texas troopers have always inspected some trucks crossing the border “they’ve never, ever, ever held up a complete system or a complete supply chain.”

An estimated 3,000 trucks cross the Pharr bridge on a normal day, according to the National Freight Transportation Chamber. The bridge is the largest land port for produce, such as leafy green vegetables, entering the U.S.

Mexico supplies about two-thirds of the produce sold in Texas.

“We’re living through a nightmare, and we’re already suffering through a very delicate supply chain from the pandemic and to try to regrow the business,” Arevalo said.

The additional inspections are conducted by the Texas Department of Public Safety, which said that as of Monday, it had inspected more than 3,400 commercial vehicles and placed more than 800 “out of service” for violations that included defective brakes, tires, and lighting. It made no mention of whether the inspections turned up migrants or drugs.

Jerry Pacheco, executive director of the International Business Accelerator and president of the Border Industrial Association, said the protests were costing businesses millions of dollars a day.

Ed Anderson, a professor at the McCombs School of Business at the University of Texas at Austin, compared the disruptions to those caused by February’s trucker blockade in Canada that forced auto plants on both sides of the border to shut down or scale back production.

Anderson said consumers would likely begin noticing the effects by the end of this week, if not sooner.