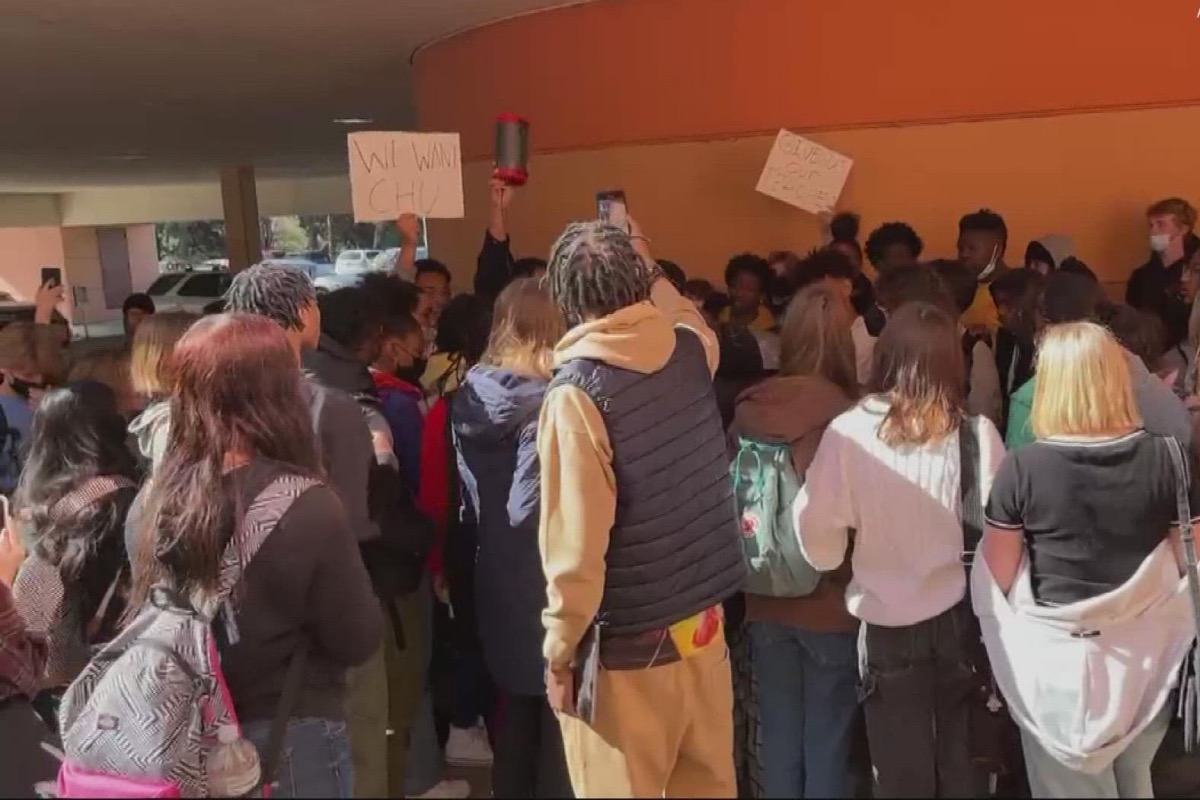 Students at Harriet Tubman Middle School stage a walkout in support of Bryan Chu, a social studies teacher who has been suspended from teaching for his outspoken criticism of a highway expansion project that threatens to tear through a Black community and relocate the school, Portland, Oregon, April 6, 2022. (Adah Crandall/Twitter)

PORTLAND, Oregon — Free speech in public education is under attack. In some states, the attacks manifest in the form of exaggerated campaigns against the implementation of Critical Race Theory in schools while said theory is not part of school curricula. In others, the introduction of bills to restrict discussions of sexual orientation and gender identity in schools would dissuade teachers from discussing such topics and supporting lesbian, gay, bisexual, and transgender students.

In Portland, Oregon, the attack against free speech comes in the form of targeting educators, placing them under investigation, and the threat of termination for speaking the truth. This is the case of Harriet Tubman Middle School social studies teacher, Bryan Chu, who was placed on paid administrative leave on April 1 in part for speaking up at Portland Public Schools (PPS) board meetings. PPS also alleges that Chu told a student to “shut up.”

Chu’s case is part of a pattern that has persisted in PPS for many years. Teachers who speak up about racism, white supremacy, and toxic respectability politics are targeted, investigated, and retaliated against. The conclusion of Chu’s case, especially if he gets terminated from his job, will establish a dangerous precedent against free speech in public education—and for all unionized workers alike, normalizing the punishment of speaking up against employers in and outside the workplace.

As Chu was placed on leave by PPS, it is important to note that he had been under investigation on prior occasions. His case demonstrates a long history of harassment and retaliation in the workplace. The causes for investigations against Chu, an outspoken Asian man, always reveal the intersections of race, his advocacy for students of all backgrounds and gender identities, and his dissent regarding inconsistencies in a district that upholds racist practices in the disguise of “equity work.”

Chu’s activism exposes a highly controversial project involving big money in the state of Oregon. The expansion of Highway Interstate 5 in the North Portland area, which is expected to cost more than $1 billion, would result in the relocation of Harriet Tubman Middle School. Chu has been notoriously critical of the project, explaining the environmental impact of the highway expansion that will significantly increase air and carbon pollution in the neighborhood. Some members of the community, however, support the highway expansion.

The history of racist violence against the Black community in the Albina area, where Tubman is located, is remarkable and undeniable. The Historic Albina Advisory Board cites the aforementioned historic abuses and claims that the project will help to rectify past wrongs. Discussion of the project by most proponents, especially Portland Public Schools, focuses on investments and development, the state of the current building where Tubman is located, but never about the children or community’s point of view or how their lives will be impacted.

Ultimately, PPS accuses Chu of coaching students into writing letters criticizing the school relocation. In the most embarrassing act of hopelessness in public education, PPS does not believe that its own students are capable of writing sincere letters of advocacy. In response to PPS actions against Chu, Tubman students staged a school walkout in his support.

A substitute teacher assigned to Chu’s classroom documented his experience with the students and their perception of their social studies teacher. The documentation reveals the remarkable brilliance of all the students, the deep connection between them and Chu, and the undeniable fact that the classroom was a safe haven for them. After submitting the letter, in a courageous act of solidarity, the substitute teacher refused to fill in for Chu.

For many years, PPS has operated under a toxic performative approach towards eradicating racism and all forms of oppression from the entire district. They have developed flashy colorful pamphlets full of “anti-racist” talking points. Periodic workshops on antiracist education are provided in some schools’ staff meetings. But when PPS is confronted for upholding white supremacy and racist practices through policies, lack of transparency, the mismanagement of resources, and the hiring of out-of-state speculators compensated with exorbitant salaries, educators are met with retaliation and harassment. Because of their commitment to students, education, and their communities, many educators in PPS have experienced harassment and retaliation to the point of having to change schools or quit their jobs.

One of the most recent examples of PPS inconsistencies is the announcement of Superintendent Guadalupe Guerrero’s salary increase to $322,354 with additional yearly cost-of-living adjustments. Guerrero’s new compensation also includes increases in his retirement benefits. The PPS board voted to approve spending more than $2 million for the 2022-2023 budget to increase salary scales and cost-of-living adjustments for administrators including principals. Simultaneously, citing highly questionable budget data and future student enrollment projections, PPS announced significant staff cuts for the 2022-2023 school year, which, among many negative impacts, will increase class sizes and deplete Special Education programs across the district.

As the audience in board meetings, including students, parents, and PPS employees, react with indignation to PPS’s dishonest proposals, they’re met with stiff resolve and the silence of the board and Superintendent Guerrero that reflects a white supremacist culture. When the board and Superintendent respond, they use a combination of confusing phrases intended to backpedal all the way to a general denial. As frustrations reach a boiling point and the largely white audience erupts loudly in discontent, the retaliation, targeting two specific educators of color, arrives in the following days through emails advising them that they are under investigation.

With their display of toxic respectability politics, PPS maintains a policy of lack of transparency and the refusal to be held accountable.

White supremacy in institutions has many layers. The case of PPS is not the overtly racist white supremacist approach that displays hateful symbols of violence against historically oppressed groups—although several PPS administrators are known for hiding and minimizing incidents of hate speech in their buildings, making students of color feel unsafe and marginalized. White supremacy in PPS operates behind a curtain of “equity work,” while their policies trickle down to harm the most marginalized groups of the city.

Credibility and safety in the workplace for PPS staff are too often defined by their whiteness, place of origin, and absence of a thick accent. Yet, PPS regularly places people of color in key decision-making positions to enact their policies, so that criticism against such policies can be dismissed as racism.

Harriet Tubman Middle School students walked out today to protest the suspension of their teacher, Bryan Chu. Are you listening @PPSConnect ? pic.twitter.com/uAIOByXGnw

One other layer of white supremacy affecting staff safety is the teachers’ union. At the time of this writing, it has been more than a week since Chu was placed on leave, and the Portland Association of Teachers (PAT) has yet to make an official statement of support. Rank-and-file educators have made this specific request to Elizabeth Thiel, the outgoing PAT president. Silence and inaction, known strategies of white supremacy, seem to be PAT’s official approach towards Chu.

The union has a long history of picking and choosing who to defend, who to advocate for, and who to leave behind. With a majority-white membership, the politics of denying support for educators of color mirrors the same white supremacist culture as Portland Public Schools, but it is even more degrading because the role of the union is to protect its members. In this case, Chu, an Asian man with a long history of excellent work with students of all backgrounds, targeted in great part for speaking as a private citizen in public meetings outside of work hours, is not receiving support from his union’s leadership. Due to the entrenched white supremacist culture that pervades the union and PPS, the future of free speech for all workers in public education is being trampled.

Many states are enacting laws to limit what can be said in the classroom, how history is taught, and what gender identities students may use. In Portland’s public schools, an unprecedented blueprint for silencing dissenting voices is under construction. But the fight for freedom of speech in public education now has a new champion —Bryan Chu— and all eyes are on him.