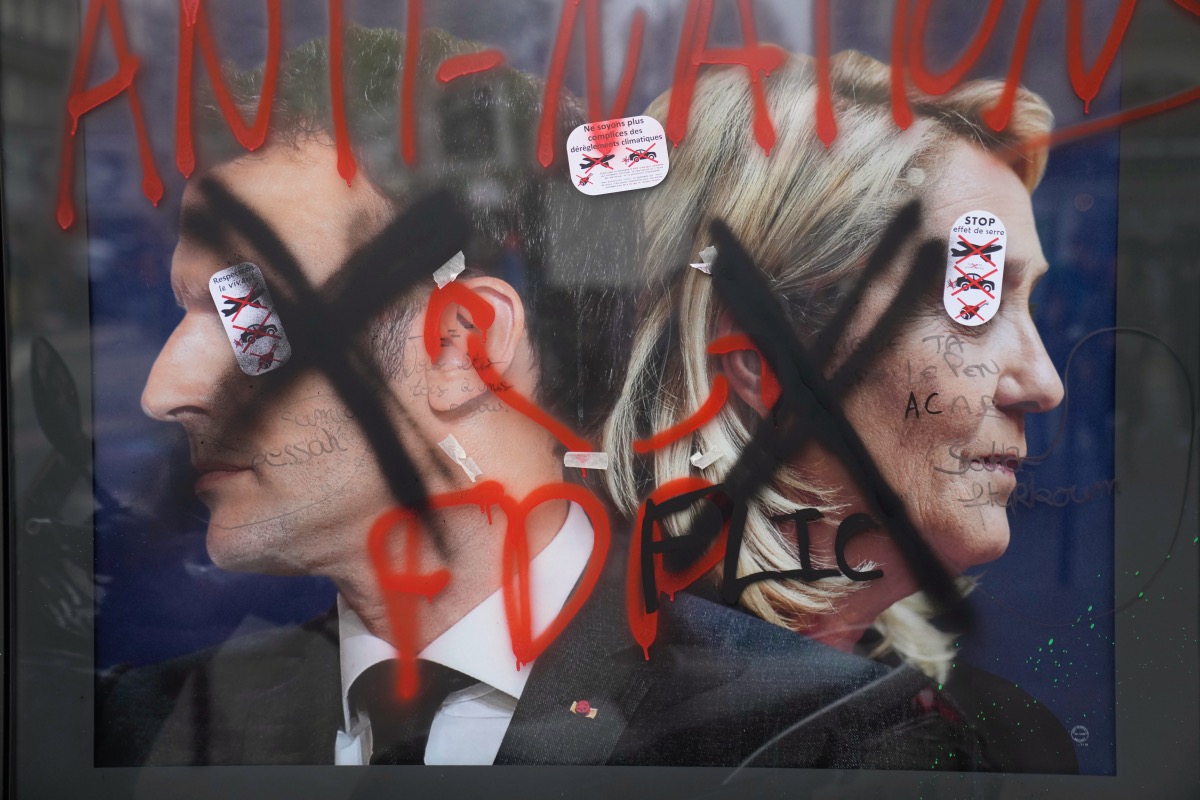 A torn front-page ad shows incumbent President Emmanuel Macron and challenger Marine Le Pen as the environmental group Extinction Rebellion takes part in a three-day demonstration against what they call France’s inaction on climate issues, in the district of Porte Saint-Denis in the center of Paris, France, Monday, April 18, 2022. (AP Photo/Francois Mori)

SAN JUAN, PUERTO RICO — As expected by most people following French politics in the last few months, the first round of presidential elections on April 10 resulted in a run-off between Emmanuel Macron and Marine Le Pen for the second straight time. Less expected, however, was how tight the race has become between Macron and LePen, the extent of the dissipation of the traditional parties, and the unification of the left around Jean-Luch Melenchon and La France Insoumise (France Unbowed).

While I am often hesitant to compare European elections with Latin American ones, these results help identify trends on an international level. The French elections, for example, share many parallels with Puerto Rico’s 2020 election and provide further insight into what to expect in Puerto Rican politics halfway till the 2024 election.

Perhaps the most glaring similarity between French politics and Puerto Rican politics is the decline of France’s two main parties, the center-right Republicans and the center-left Socialists, and the decline of Puerto Rico’s two main parties, the center-right New Progressive Party (PNP, in Spanish) and the center-left Popular Democratic Party (PPD). After controlling dominating in French politics for decades, the Republicans and Socialists together garnered less than seven percent in the first round of voting, bested by emergent parties on the left, right, and center.

In Puerto Rico, support for the PNP and the PPD also declined sharply in the most recent elections, with neither party winning more than a third of the vote, representing the third consecutive election in which neither obtained an outright majority. In this power vacuum, emergent parties have been strengthened. On the far right, the Proyecto Dignidad (Dignity Project) represents a bloc of Christian conservatives, and the new Movimiento Victoria Ciudadana (Citizen’s Victory Movement) and the more established Puerto Rican Independence Party together present a formidable opposition on the left.

Despite their decline at the national level, the Republicans and Socialists in France and the PNP and PPD in Puerto Rico continue to dominate electoral politics at the local level. The Republicans and Socialists hold a majority of the French regional council presidencies —comparable to governorships in the United States or mayorships in Puerto Rico, though with major differences— and in the 2021 regional elections, Les Républicains and the Parti socialiste won a combined 60 percent of the vote, a far cry from their combined 6.53 percent of the vote in the first round of the 2022 presidential elections.

Likewise, in Puerto Rico, the penepés and the populares, as members of the two major parties are known, still control the mayorships in all 78 municipalities. While the local figures may bring a sigh of relief to the traditional party leadership in both countries, it remains to be seen how local strength can help resurrect the parties nationally.

In France, the Republican nominee, Valerie Pecresse, regional council president of Île-de-France, underperformed in her own region, receiving just under 6.2 percent of the vote. The Socialist nominee and mayor of Paris, Anne Hidalgo, received just under 2.1 percent of the city’s vote.

In Puerto Rico, Carlos Delgado, former mayor of the town of Isabela, was nominated by the PPD as a change candidate, with the belief that a candidate from outside of the unpopular central government in San Juan would boost the party. But Delgado obtained the worst electoral result in the party’s history. Meanwhile, several PPD mayors and legislators are feeling the pressure of the party’s national decline and considering abandoning the party altogether in the 2024 elections.

It remains to be seen if, in both countries, local elected officials can build on their local popularity to rebuild a national political movement, or if the party’s national decline will convince local officials to look elsewhere.

Another similarity between both is the rise of the far right. In France, Le Pen’s far-right National Rally has managed to advance to a run-off election twice now, and the race between her and Macron is considered to be within the margin of error. In Puerto Rico’s 2020 elections, Dignity Project, after almost failing to get enough petition signatures to gain ballot access, stunned Puerto Rico’s political world by winning nearly seven percent of the vote, coming in third place in nine municipalities, and getting two at-large legislators elected.

As in France, the far right in Puerto Rico has found its way into the political establishment.

Obviously, Le Pen is different. She has been active in electoral politics for two decades, and this is her third presidential run. Her father, Jean-Marie Le Pen, ran for president five times himself. Their party, the National Rally —formerly the National Front— has been an institution in French politics for 50 years now.

Puerto Rico’s Dignity Project does not have the weight of well-established politicians or family dynasties behind it, but the party’s freshman senator, Joanne Rodríguez Vev, has proven savvy in dividing Puerto Rico’s traditional parties along hot-button cultural issues to build her own political capital. She sent shockwaves across Puerto Rican politics earlier this month by submitting legislation to limit abortion rights, effectively causing the PNP and PPD Senate delegations to clarify their positions on abortion. The traditional parties’ inability to articulate clear positions on the issue has outraged the liberals in their respective bases, with many, particularly in the PPD, questioning if they will continue voting for the party.

Both parties, however, have also lost credibility with conservatives for the same reason, and Rodriguez Veve has effectively established herself as their champion. Dignity Project’s ability to quickly consolidate and mobilize support will not only continue to grow the far-right but become a threat to traditional parties and potentially the basic human rights of many Puerto Ricans for decades to come.

Finally, Melenchon’s overwhelming victories in the French overseas departments of the Caribbean demonstrate the spread of the Latin American Pink Tide and the growing support for self-determination and independence among the colonized Caribbean nations. Melenchon’s platform calls for the creation of a Sixth French Republic by way of a constitutional assembly that incorporates elements of direct democracy and civic participation, modeled after Rafael Correa’s “Citizen’s Revolution” in Ecuador. The plan also includes the creation of a second general congress of insular territories to directly address the issues of decolonization and autonomy for the overseas departments by 2023. Furthermore, Melenchon proposes increased investment in the overseas territories to address issues such as health care, cost of living, and climate change to decrease economic and social dependence on the metropolis and facilitate decolonization.

These positions caused Melenchon to win over 50 percent of the vote in the West Indian territories of Guadalupe, Martinique, and Guiana, and secure pluralities in Reunion, Saint Martin, Saint Pierre, and Miquelon.

For Juan Dalmau Ramírez, the nominee of the Puerto Rican Independence Party (PIP), the same approach also proved successful. On the campaign trail, Dalmau Ramírez focused on bread and butter issues, drawing connections between how austerity, unemployment, the collapse of the education and health care system, and the island’s insufficient approach to issues such as climate change, are all consequences of Puerto Rico’s colonial condition.

Dalmau Ramirez also revived discussion around the PIP’s long-held position that decolonization should be facilitated through a highly-democratic and inclusive process of civic participation by way of a status assembly, and capitalized on the growth of support for independence caused by apathy towards the United States and the local government following the federal response to Hurricane María, as well as the protests against former Gov. Ricky Rosselló in 2019. The PIP’s support grew from two percent in the 2016 gubernatorial election to 14 percent in a competitive five-way race only four years later. The last election was also a personal best for Dalmau Ramirez, who increased support from 47,331 votes in his first campaign in 2012 to 174,402 votes in 2020.

The second round of the French presidential election is on Sunday, but in electoral politics, a lot can change in such a short amount of time. For analysts of international and Puerto Rican politics, however, we are left with the following takeaways:

A societal shift is happening. As the politics of the past begin to be phased out, it is up to voters to recognize the current trends to determine how they insert themselves into a new political movement and create the political transformations they hope to see in the world.

Paul Figueroa is an educator and academic who ran for San Juan City Council in the 2020 elections for the Puerto Rican Independence Party. Twitter: @paul_delpip