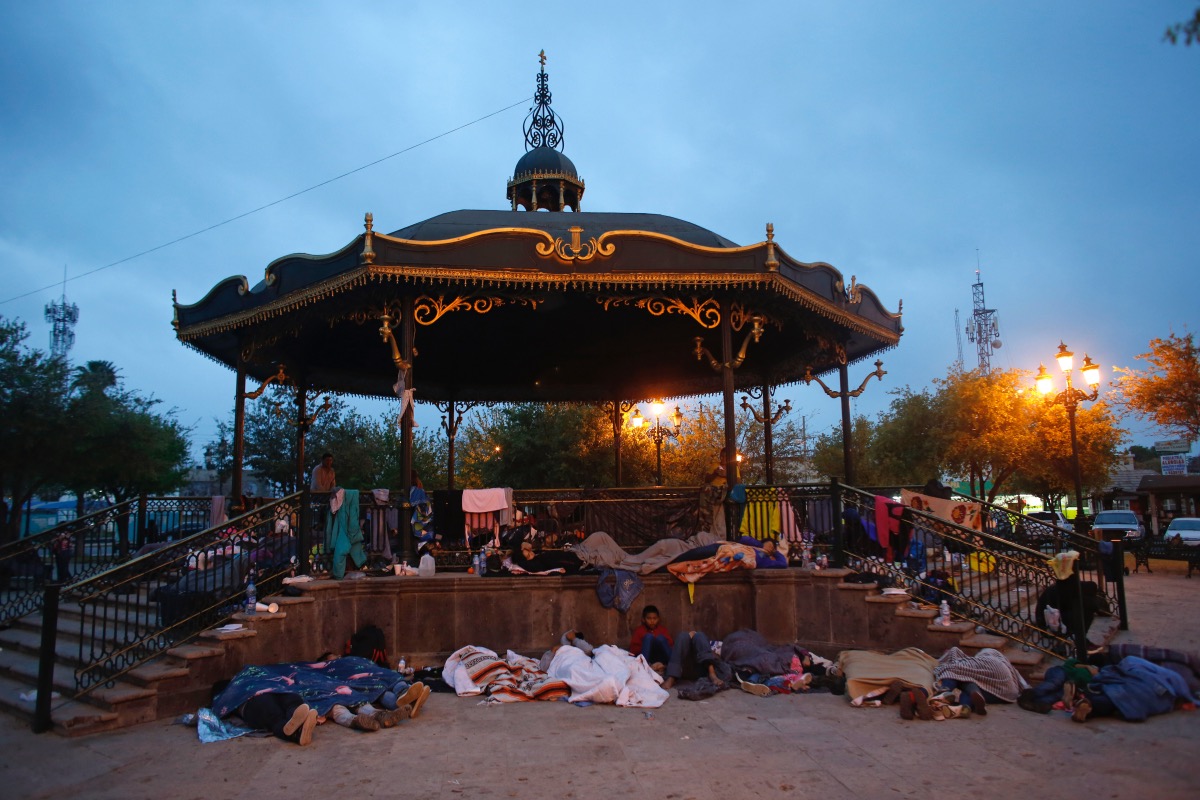 Migrants sleep under a gazebo at a park in Reynosa, Mexico, March 27, 2021. The camp of migrants mainly from Guatemala, El Salvador, Honduras, and Haiti sprung up after U.S. officials, citing the pandemic, invoked a health rule that denies migrants a chance to seek asylum. (AP Photo/Dario Lopez-Mills, File)

MEXICO CITY (AP) — Mexican authorities said Tuesday they have relocated a migrant camp that sprung up in a park in the border city of Reynosa, moving about 2,000 people from Central America and Haiti to a shelter in the city, across the border from McAllen, Texas.

The camp of migrants mainly from Guatemala, El Salvador, Honduras, and Haiti sprung up after U.S. officials, citing the pandemic, invoked a health rule that denies migrants a chance to seek asylum.

Mexico’s National Immigration Institute said the migrants were taken near midnight Monday to the shelter, which it said will have better hygiene and food services.

But on Monday, people in another border city, Nuevo Laredo, said hundreds of migrants, mainly Haitians, have streamed into the city, which is across the border from Laredo, Texas

The rush apparently started after the U.S. began processing some asylum seekers there.

The Catholic bishop of Nuevo Laredo said Monday that migrant shelters there are already overcrowded, with some migrants sleeping outside in tents.

Bishop Enrique Sánchez Martínez said migrants started streaming into Nuevo Laredo in late April, though the city isn’t usually popular among migrants, in part because it is dominated by the violent Northeast drug cartel.

“It is new for us because this is the last place they come, due to the conditions of our border, of our city, which are sometimes adverse for migrants,” the bishop said. “But since they opened the door in the United States to asylum requests, a lot of them came in large groups.”

Marvin Ajic, director of the Casa Nazareth shelter, said that around April 16, Mexican authorities notified the shelters that the United States would resume processing asylum claims for humanitarian reasons.

The U.S. had begun allowing more people in, especially Central American adults, to prepare for lifting Title 42 —a pandemic-era health rule that denies migrants a chance to enter the U.S. to seek asylum— on May 23. But a federal judge in Louisiana ruled last week that the government could not unwind the rule before the end date.

“The (Mexican) immigration officials organized things with the shelters, and the plan was to send people who had been waiting a long time, without any checks, basically anyone,” Ajic said.

That apparently drew the attention of other migrants, including Haitians.

In September, similar rumors sparked a rush by about 15,000 mostly Haitian refugees to the Texas border, where they camped under a bridge. U.S. officials began large-scale deportations of Haitians while also allowing thousands to remain in the U.S.

Ajic warned migrants against coming to the border, noting the risks.

On Monday, Mexico’s National Immigration Institute said that so far this year, it has hauled the bodies of 19 immigrants from the Rio Grande, also known as the Rio Bravo.