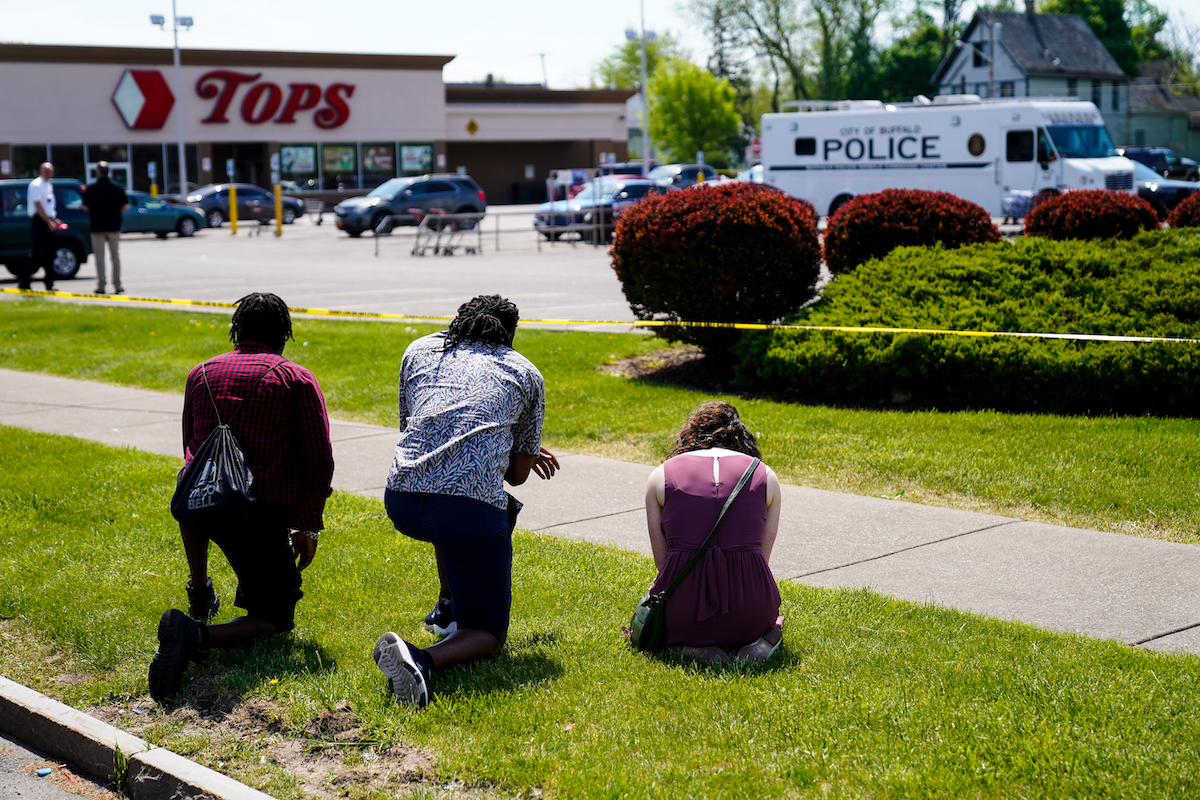 People pray outside the scene of Saturday’s shooting at a supermarket, in Buffalo, N.Y., Sunday, May 15, 2022. (AP Photo/Matt Rourke)

Editor’s Note: The following was added to the paragraph about the Pulse nightclub shooting—”where the majority of victims were of Puerto Rican descent.”

Black people going about their daily lives—then dying in a hail of bullets fired by a white man who targeted them because of their skin color.

Substitute a supermarket in Buffalo, New York, with a church in South Carolina, and Malcolm Graham knows the pain and grief the families of those killed Saturday are feeling. He knows their dismay that racial bigotry has torn apart the fabric of their families.

“As a country, we need to acknowledge that it exists,” Graham said. “There’s a lack of acknowledgment that these problems are persistent, are embedded into systems and cost lives.”

For many Black Americans, the Buffalo shooting has stirred up the same feelings they faced after Charleston and other attacks: the fear, the vulnerability, the worry that nothing will be done politically or otherwise to prevent the next act of targeted racial violence.

He shot 11 Black people and two white people at the grocery store, authorities said. Ten people died, all of them Black.

A 180-page document, purportedly written by Gendron, gives plans for the attack and makes references to other racist shootings and to Roof. The document also outlines a racist ideology rooted in a belief that the U.S. should belong only to white people. All others, the document said, were “replacers” who should be eliminated by force or terror. The attack was intended to intimidate all non-white, non-Christian people and get them to leave the country, it said.

The idea that those killed at the Tops Friendly Market lost their lives because of the shooter’s racism is “sick,” said Steve Carlson, 29, who is Black and grew up knowing Katherine Massey, one of the victims.

“It’s not right. You don’t pick what ethnicity you’re born to,” Carlson said. “These people were just shopping, they went to go get food for their families.” 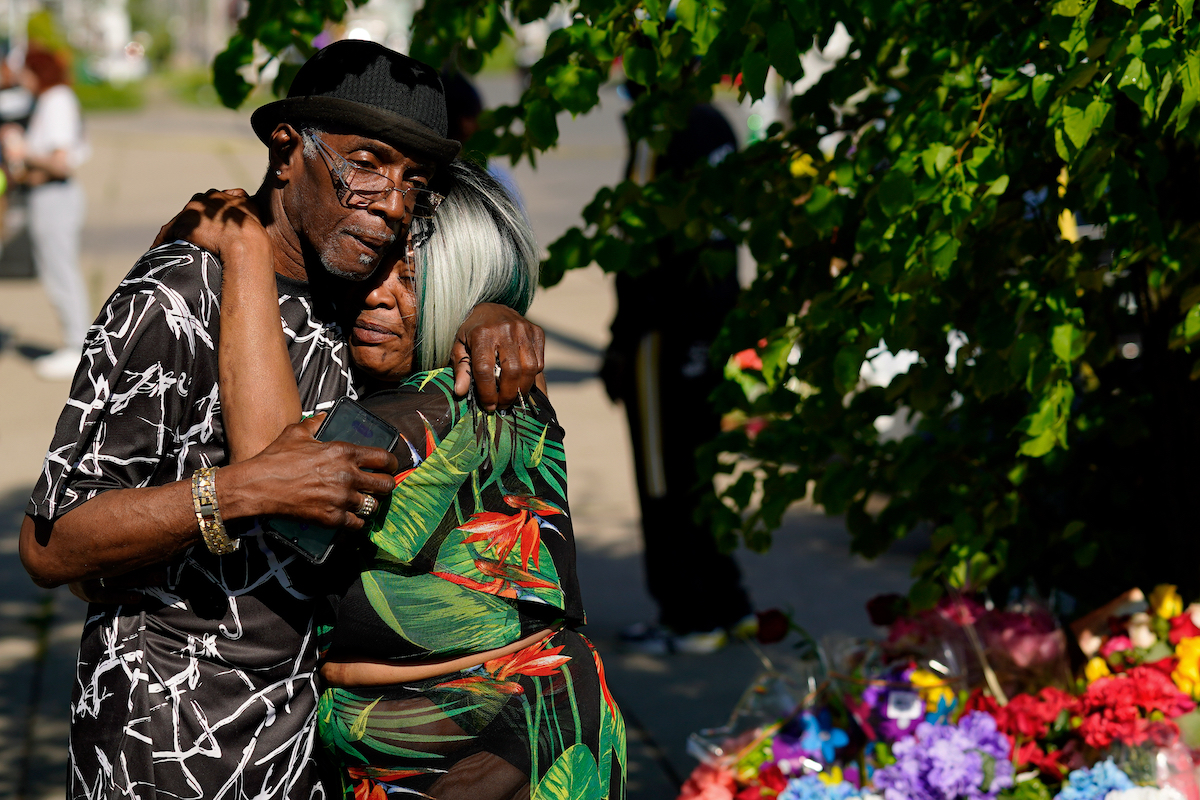 People embrace outside the scene of a shooting at a supermarket a day earlier, in Buffalo, N.Y., Sunday, May 15, 2022. (AP Photo/Matt Rourke)

At State Tabernacle Church of God in Christ, Deacon Heyward Patterson was mourned during services Sunday. Pastor Russell Bell couldn’t wrap his mind around the attack and Patterson’s death.

But as abhorrent as the shooting was, it was hardly an isolated incident. The history of the United States is filled with white supremacist violence, starting from even before its official origins.

Black people have borne and continue to bear the brunt of much of it, but other groups have also been targeted in attacks because of their race, including Latinos in the 2019 shooting at a Walmart in El Paso, Texas, where 22 people were killed.

Gunmen with biases against religion and sexual orientation have also carried out targeted violence: the shootings at a San Diego synagogue in 2019 and a gay nightclub in Orlando, Florida, in 2016, where the majority of victims were of Puerto Rican descent.

Democratic Florida state Rep. Carlos Guillermo Smith, who is gay and of Peruvian descent, immediately had flashbacks to the Pulse nightclub shooting that left 49 victims dead. The shooter targeted gay patrons in what was a largely Latino crowd.

“It’s déjà vu all over again in Orlando,” said Smith, who represents an Orlando district. “2016 seems like a long time ago, but in 2022 there’s a lot more hatred and bigotry out there.”

Experiencing violence of any kind is obviously traumatic, but the impact of targeted violence like this has ripples on a broader level.

“To be targeted for these things that you cannot control, it’s not only extremely painful emotionally, but it also impacts the way you perceive the world going forward after that,” said Michael Edison Hayden, spokesperson for the Southern Poverty Law Center, which advocates for civil rights. 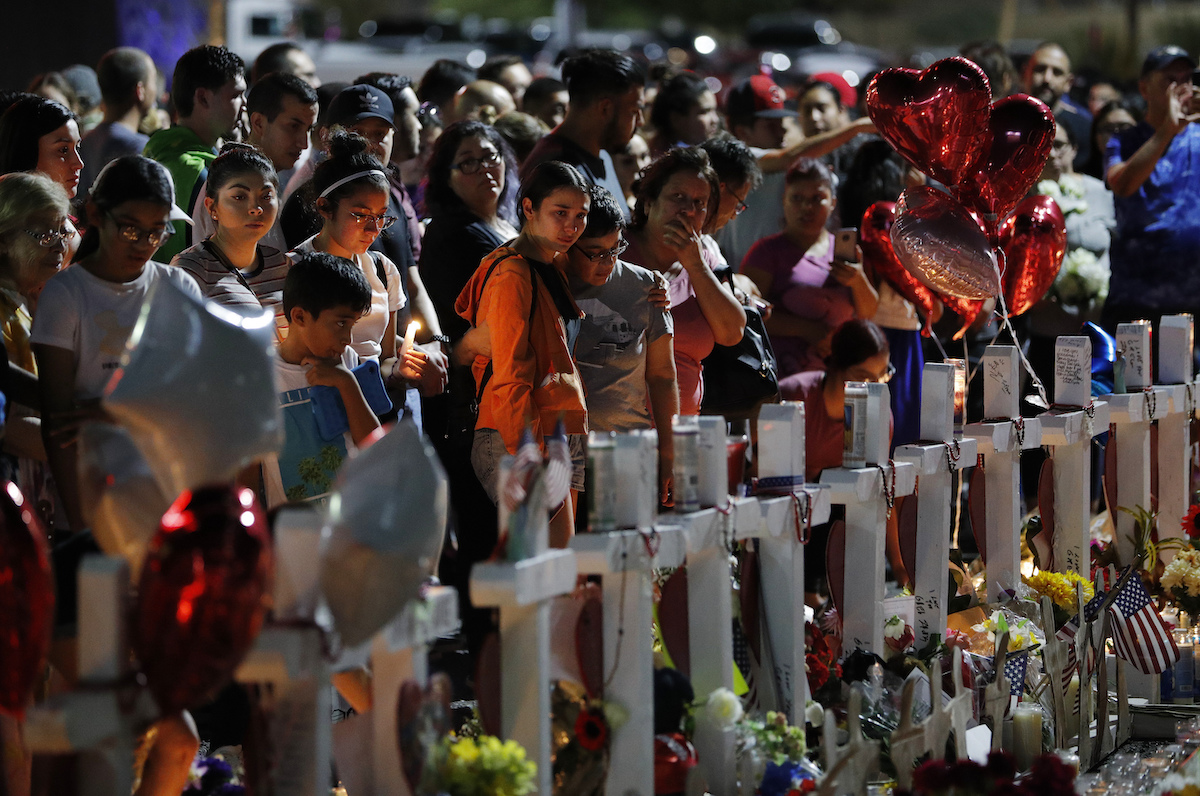 People crowd around a makeshift memorial near the site of a mass shooting at a shopping complex, on August 5, 2019, in El Paso, Texas. (AP Photo/John Locher, File)

Hate crime laws are on the books in recognition of that reality. The effect of events like these is “you’ve increased the vulnerability of everyone who looks like the target,” said Jeannine Bell, a professor at Indiana University’s Maurer School of Law. “This is a different type of crime because it impacts not just the victims, but also the community.”

While there’s always hand-wringing and dismay after incidents like these, that hasn’t translated into a commitment to address the bigotry that underlies them, said Cornell Williams Brooks, a professor at the Harvard Kennedy School and former president and CEO of the NAACP.

He’s weary of political leaders’ promises to do more about white supremacist threats and gun violence.

“Count the number of sympathy cards and flowers, prayers and thoughts that have been extended to the victims of mass shootings, to the victims of racialized violence,” he said. “Do we really need (politicians) showing up to our places of worship to help bury our folks and do nothing to stop the carnage?”

Farrington reported from Tallahassee, Florida. Associated Press writer Carolyn Thompson contributed from Buffalo. Hajela and Morrison are based in New York City and are members of the AP’s Race and Ethnicity team.