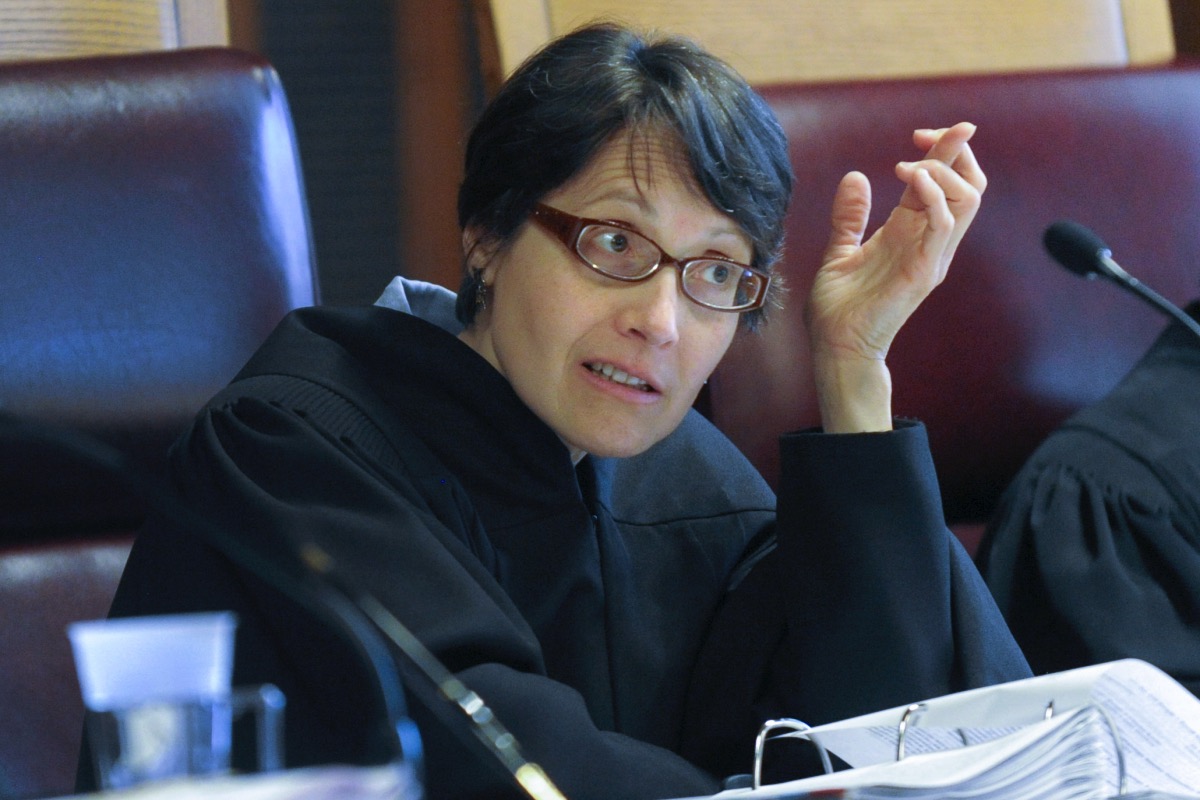 Court of Appeals judge Jenny Rivera, who is no longer allowed in the courtroom and has been referred to a disciplinary committee because she hasn’t complied with a rule requiring all court personnel to provide proof they’ve been vaccinated against COVID-19. (AP Photo/Hans Pennink)

NEW YORK — The term judicial misconduct conjures up images of egregious behavior of corruption, sexual harassment, fixing tickets, and related transgressions. It is a rare sanction for a rare number of unfortunate, disturbing incidents.

Now, according to media reports, New York’s Commission on Judicial Conduct —whose proceedings by law are to be confidential until concluded— is considering the removal of Associate Judge Jenny Rivera from the Court of Appeals, the state’s highest court, allegedly for “noncompliance” with vaccination policies issued during the pandemic.

Judge Rivera has not been vaccinated. She has her reasons, and she insists on preserving her privacy, in spite of leaks to the press. She has continuously worked during the pandemic to this day. She has complied with every procedure short of vaccination. She sits on a court that convenes in person three times a month for argument, and the majority of its members work remotely or in privately owned office buildings with very limited public traffic.

Judge Rivera is an outstanding and rational jurist. She is not an anti-vaxxer, nor anti-government, a conspiracy theorist, or an extremist. At 61, she simply cannot risk the particular effects that vaccination might bring. Her opinions, however, demonstrate her continued commitment to the rule of law and the expectations of the complex and multi-faceted communities she represented when called upon to serve.

Her appointment in 2013 was not assured by any means. Judge Rivera is a graduate of Princeton University, both the NYU and Columbia law schools, and was a civil rights attorney, professor of law, and a role model for Latinas and Latinos in the state. Yet, her detractors questioned her credentials and qualifications—standard fare for women of color who deign to become judges in our country’s top courts. And as people of color know, those detractors never go away quietly.

It is not surprising that Judge Rivera has often voiced her disagreement with majority opinions issued by the Court of Appeals by authoring and participating in dissenting opinions, especially in matters concerning the rights of individuals to fair housing, equal education, humane treatment, and freedom of choice.

So perhaps it is not surprising that she is where she is today, on the precipice of removal to join the ignoble ranks of judges who aided persons to avoid arrest, engaged in fraud, demeaned women, engaged in sexual misconduct, manipulated the judicial process—the list goes on. Tellingly, the Commission on Judicial Conduct did not recommend the removal of several judges for plainly unlawful or unethical conduct, such as conflicts of interest, violations of litigants’ rights, intoxication, bias, prejudice, favoritism, and gross neglect. Yet Judge Rivera, who has followed court rules, sought an exemption, and has continued to work productively on the court, is being paraded in the press as at risk of being removed from the bench.

The court system’s own ethics committee has opined that a judge’s vaccination status implicates no unlawful or unethical behavior.  In January 2022, in a separate matter not involving Judge Rivera, the New York State Office of Court Administration’s Committee on Judicial Ethics issued an advisory opinion on behalf of an unnamed judge who was unvaccinated and asked to delay vaccination and challenge the assertion that he or she was “unfit for service” on the bench. The opinion noted that the legality of mandatory vaccinations is still being litigated in federal and state courts—a fact even today. The opinion also concluded that “the judge’s work-arounds to the court system’s vaccination policies do not raise any ethical issues, but only issues of law and administrative policy” (emphasis mine).

Judge Rivera’s compliance with all the rules, except the vaccination requirement, is therefore neither unethical nor illegal. At most, it tests the administrative policies of the courts. The same court system is presided over by the chief judge of the Court of Appeals, whose opinions Judge Rivera occasionally refuses to join.

Should the Commission on Judicial Conduct recommend removal, and should the Court of Appeals adopt such a recommendation, both the court and the Commission would be in unchartered waters. For the first time ever, a sitting judge on New York’s highest court would be removed—and the only Latina judge on the court, at that.

Her current position, in light of what we know, is nowhere near the egregious conduct that warrants removal, and from all appearances, dissent in New York State carries a heavy price.

Juan Cartagena is a constitutional and civil rights lawyer in New York and New Jersey. He is also the former president and general counsel at LatinoJustice PRLDEF.