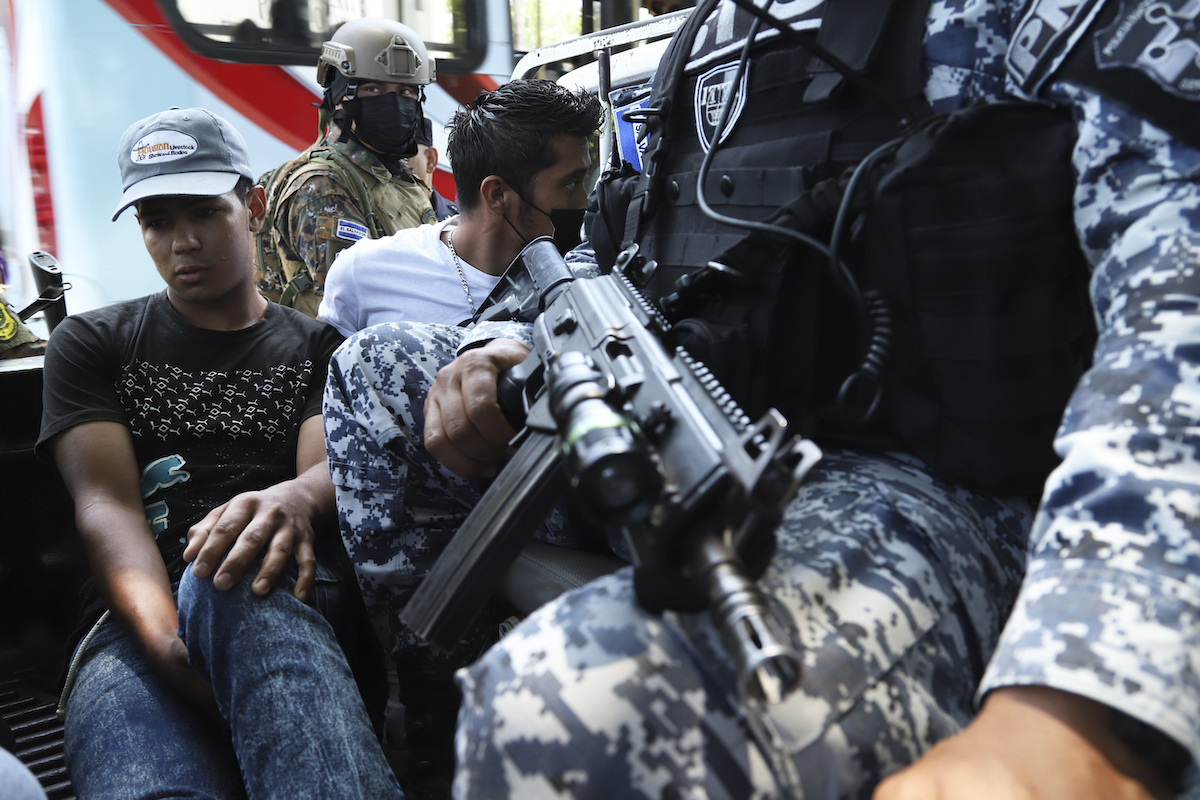 Men are detained by the police, suspects of a homicide near a market in San Salvador, El Salvador, Sunday, March 27, 2022. (AP Photo/Salvador Melendez, File)

The vote extends for 30 more days the state of emergency that was originally issued for one month in late March and then extended in April for another month.

Bukele’s security minister, Gustavo Villatoro, vowed that the government’s “war” on gangs will continue, even though the homicide rate has dropped sharply.

“This war is going to continue for as long as necessary and to the extent that the public continues to demand it,” Villatoro said. “We are going to continue to confront this cancer, and we have said it before and we stand by it, this war will continue until the gangs are eradicated from the territory of El Salvador.”

The measure was approved with 67 votes in the 84-seat congress, where Bukele’s party holds a majority.

Bukele has used emergency powers to round up about 34,500 suspected gang members following a spate of killings in March.

Rights groups have criticized the measures, saying arrests are often arbitrary, based on a person’s appearance or where they live.

Polls suggest the emergency decree has strong support among Salvadorans tired of killings and extortion.

The measure came after a spate of homicides in late March, when gangs were blamed for 62 killings in a single weekend, a level of violence the country of 6.5 million people had not seen in years.

But the original justification for the measures —the surge in homicides— has subsided.

“Whether there is a legal justification, and obviously there isn’t, Articles 29 and 30 of the constitution are very clear about the causes that can trigger a state of emergency, and the causes have disappeared,” said Ruth Eleonora López, a lawyer and activist with the civic group Cristosal.

The measure restricts the right to gather, to be informed of rights and to have access to a lawyer. It extends to 15 days the time that someone can be held without charges.

Bukele has also established a raft of other measures. Among other things, they lengthened sentences and reduced the age of criminal responsibility to 12.

El Salvador’s congress has authorized prison sentences of 10 to 15 years for news media that reproduce or disseminate messages from the gangs, alarming press freedom groups.

Gang members held at Salvadoran prisons have been put on reduced food rations, denied mattresses and frog-marched around.

Rights groups have expressed concerns that innocent people are being caught up in sweeps targeting the street gangs.

But Villatoro seemed unlikely to be swayed by human rights arguments. Calling gangs “a cancer that won’t be eradicated with chemotherapy,” he said, “We need more time to continue eradicating this cancer from all of our country’s communities.”

Gangs control swaths of territory through brutality and fear. They have driven thousands to emigrate to save their own lives or the lives of their children who are forcibly recruited.

The gangs’ power is strongest in El Salvador’s poorest neighborhoods, where the state has long been absent. They are a drain on the economy, extorting money from even the lowest earners and forcing businesses that can’t or won’t pay to close.