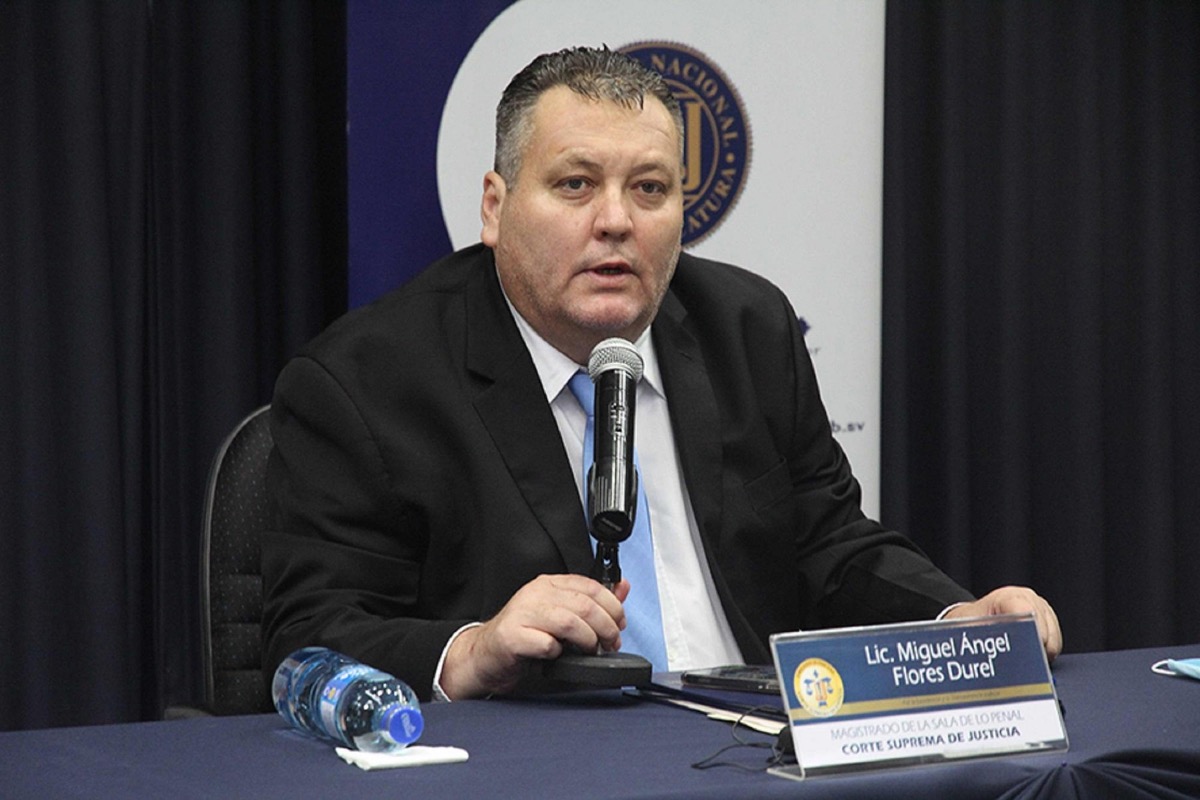 Judge Miguel Ángel Flores Durel, a magistrate in the Penal Chamber of the Salvadoran Supreme Court of Justice from 2021 to 2030. (El Salvador Supreme Court/El Faro)

El Salvador, in Brief: A Supreme Court magistrate appointed by the ruling party was years ago the attorney of “Diablo de Hollywood,” the head of the Mara Salvatrucha. The detail, undisclosed when he was appointed last year, was revealed when the judge recused himself from ruling on the gang leader’s pending extradition to the United States.

Records reviewed by El Faro’s Gabriel Labrador show that the magistrate’s past relationship with the Mara Salvatrucha is more extensive than that. Flores Durel also worked as counsel for Henríquez’s wife, Jenny Corado, and in 2018 defended 87 Mara Salvatrucha members arrested in a sweeping offensive against the gang’s finances. None of this past work for MS-13 was shared with the public during his selection to the court.

The revelations came to light only after Flores Durel recused himself from the Supreme Court’s ongoing deliberations over whether to extradite Henríquez, accused along with 13 other gang leaders in the Eastern District of New York on drug trafficking and terrorism charges. Read the full report here. His former work for the gang was not publicly discussed in his interviews with the legislature prior to his confirmation.

He was appointed to the bench at the end of June 2021, after the Bukele-controlled legislature illegally removed and replaced the Constitutional Chamber magistrates in May. The selection of five magistrates including Flores Durel was the second round of illegal appointments to the high court, as in two months the party had doubled the constitutionally allotted number that any given legislature may place on the high court.

Prior to joining the Salvadoran high court, Flores Durel ran a white shoe private criminal defense practice specializing in money laundering cases. He even got former First Lady Ana Ligia Mixco Sol de Saca a reduced sentence of 10 years in prison for laundering money alongside her husband, former Arena President Elías Antonio Saca (2004-2009). These ties were known when he was appointed to the Supreme Court.

Perhaps it’s ironic that if Henríquez were arrested during El Salvador’s state of exception, he would not have the right to legal counsel. The Bukele-controlled legislature suspended that right when they enacted the state of exception in late March following a record spike in murders for which MS-13 has now claimed responsibility.

Yesterday, as police reported over 34,000 arrests during the state of exception, the President’s party extended the measures for a third month through the end of June.

“Pushed by the failure of his security plan, which was nothing more than a criminal pact, Bukele decreed a state of exception and ordered mass detentions,” writes El Faro’s editorial board. “If, before, low homicide figures provided a veneer of efficiency in public security, now Bukele needs arrest numbers, at any cost, to show off his iron fist.”

The administration has cited what it called “opposition polling” as its reason for the second extension of the emergency measures. Central American University pollsters released findings this week that while 78 percent of Salvadorans feel security has improved nationwide under the state of exception, 48 percent say the same is true for the neighborhood where they live.

On Wednesday the legislature also approved $10.9 million to purchase “cutting-edge technology allowing for rapid, unique, precise information-gathering on criminal activity.” In March the legislature curbed protections from wiretapping without a warrant.

If you’ve followed El Faro English this year, maybe you know that the budget increase comes amid serious questions about state surveillance, including at least 35 cases of journalists (22 of them from El Faro) and civil society targeted by the spyware Pegasus since Bukele took office.

Thanks for your time. If you’ve gained from our work, consider funding independent journalism in Central America, in its most critical hour, at support.elfaro.net.

One response to “From EL FARO ENGLISH: Former Attorney for MS-13 on Supreme Court in El Salvador”