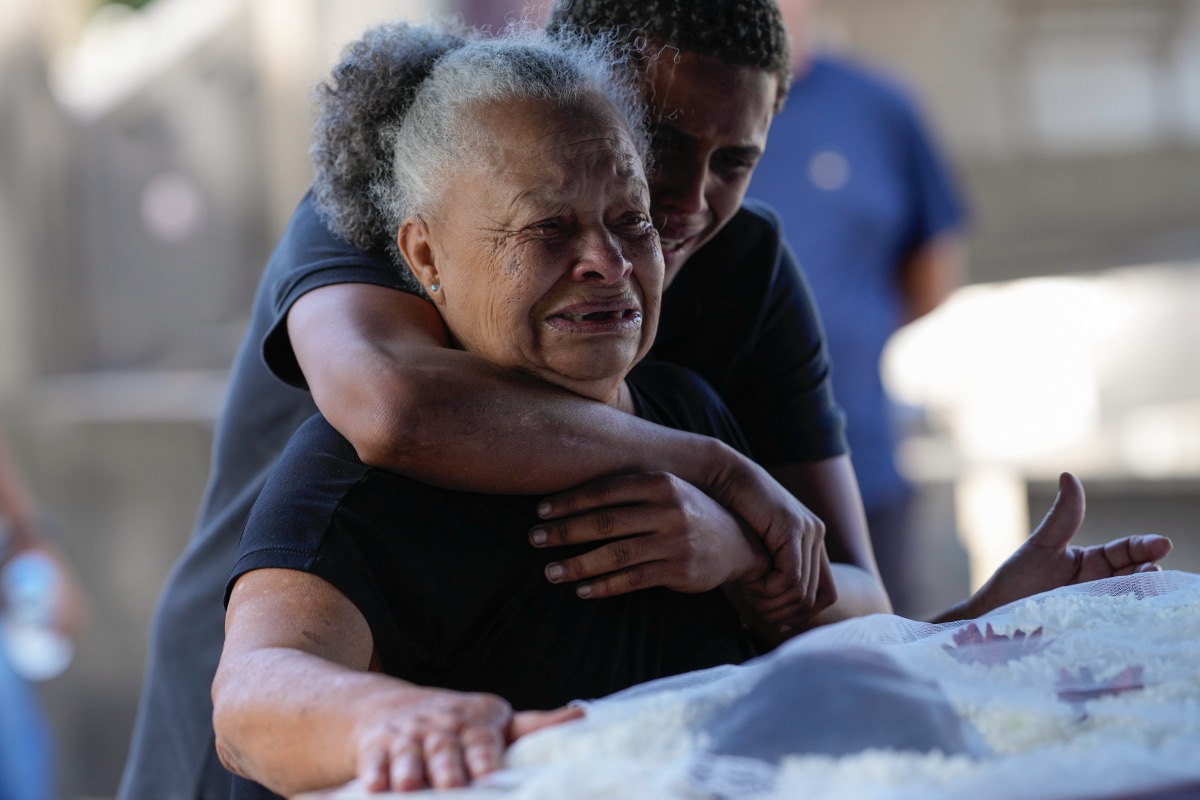 Divone Ferreira da Cunha, 74, and her grandson cry during the funeral of her daughter Gabrielle Ferreira da Cunha, 41, who was killed during a police raid against alleged drug traffickers at the Vila Cruzeiro favela Tuesday that left at least twenty five people dead in Rio de Janeiro, Brazil, Wednesday, May 25, 2022. (AP Photo/Silvia Izquierdo)

As the U.S. faced yet another school massacre —19 children and two teachers killed in Uvalde, Texas— Rio de Janeiro once again awoke with a massacre in one of the city’s infamous favelas, this time the Vila Cruzeiro.

In just one year, 181 people have been killed in 39 massacres in the state. In May 2021, the police carried out their deadliest operation to date, leaving 28 dead in the Jacarezinho favela. The police claim that all those killed were criminals and wanted drug traffickers, but residents denounce the excessive violence and summary executions in several of these actions.

Gabrielle Ferreira da Cunha, aged 41, was shot and killed at her home in a neighboring favela. Natan Werneck, 21, was also shot and died on the way to the hospital after waiting six hours for help. Residents of the favela denounced summary executions, including police officers murdering a man with multiple knife stabs. At least 16 of the dead had no arrest warrants.

The two largest police massacres in the state’s history have occurred under the watch of Gov. Claudio Castro, who still enjoys support from by both Bolsonaro and prominent Workers’ Party leaders.

In Rio de Janeiro’s favelas, violence is business as usual and political alliances are always confusing. And while the police kill, the army plots the end of free university education and free healthcare via the Single Health System—a model for the world.

With immense influence in the Bolsonaro government, holding key posts in the administration and even getting involved in political issues as not seen since the end of the military dictatorship (1964-1985), officers of the armed forces are behind the document called “Nation Project,” which, among other things, pushes for the end of the autonomy of public universities —with the goal of “de-ideologizing” education— the “occupation” of the Amazon, opposition to “globalism,” and the end of the free public health system.

The proposal by the armed forces is part of a series of threats made by Bolsonaro and his allies against Brazilian democracy. According to recent polls, 56 percent of Brazilians say that Bolsonaro’s threats against democracy must be taken seriously.

On the eve of May 1st, Labor Day, when trade unions historically demonstrate in defense of better wages and working conditions, Bolsonaro gave a speech calling on supporters to demonstrate against the Supreme Court. During the May 1st demonstrations, former Congressman Daniel Silveira, who was pardoned by Bolsonaro after being convicted of threats to the Supreme Court, was the guest of honor in defense of the government.

Former judge Sergio Moro —who was going to be a candidate for the presidency but ended up giving up in the final stretch— became a defendant in a lawsuit proposed by the Workers’ Party for alleged damage caused to the public patrimony during Car Wash Operation, an investigation initially headed by Moro that led to the imprisonment of former President Lula da Silva in April 2018.

Lula was eventually released in November 2019 and is now favored to win the presidential election in October. The cases against him were quashed by the Supreme Court based on technicalities, and Moro, once the minister of justice and public security under Bolsonaro, is now at risk of going to jail himself.

Also on the topic of the presidential election, the former governor of São Paulo, João Dória, has ended his campaign. Dória, who became known for confronting the federal government and initiating the mass vaccination process in the country, ended up isolated by his own party, the Brazilian Social Democracy Party (PSDB), and embroiled in internal disputes.

Finally, after being accused of engaging in sex tourism in Ukraine and caught sending messages with sexist remarks about Ukrainian women, Congressman Arthur do Val —known as “Mamãe Falei,” or “Mommy, I spoke”— was impeached by his peers earlier this month and became ineligible for public office for eight years. The vote was unanimous: 73 votes in favor, none opposed, and zero abstentions.

While Rio de Janeiro is ravaged by violence and the government is more concerned with filling posts and threatening the electoral process, in the state of Pernambuco more than 84 people died due to the heavy rains. As in past years, it rains “more than expected” without politicians ever thinking of preparing for the eventuality of above-normal rainfall. The capital Recife and the metropolitan region are the most affected.

The indifference of politicians to the well-being of the population is not restricted to a lack of investment in the containment of natural disasters. Bolsonaro’s government —known for denying the COVID-19 pandemic, described more than once by the President as a “little flu“— was accused of diverting 90 million reais (about $19 million), intended to mitigate the impacts of the pandemic among poor communities, to buy tractors for allied politicians.

The government said the tractors would be given to poor families in the countryside, but experts point out that these farms are generally too small to use such machines.

The government was also involved in the purchase of overpriced garbage trucks in which the entire bidding process and sale went through operatives connected to Bolsonaro’s chief of staff, Ciro Nogueira—from the state company responsible for the purchase, through the city hall that received one of the vehicles, to the company that sold the truck.

The overpricing of the truck purchases comes close to 110 million reais, or just over $23 million.

Those are yet more corruption scandals involving Bolsonaro’s government that just last month was accused of siphoning off education funds. Bolsonaro has repeatedly made speeches claiming that in his government there is no corruption, but reality once again refutes his claims.

As June approaches, the electoral climate warms up, but the real problems of the country do not stop emerging and putting the population, especially the poorest, in a delicate situation. Inflation has driven prices up to a frightening level. Hunger has returned to the country. Violence causes more and more deaths alongside natural disasters, which are always expected but never mitigated.