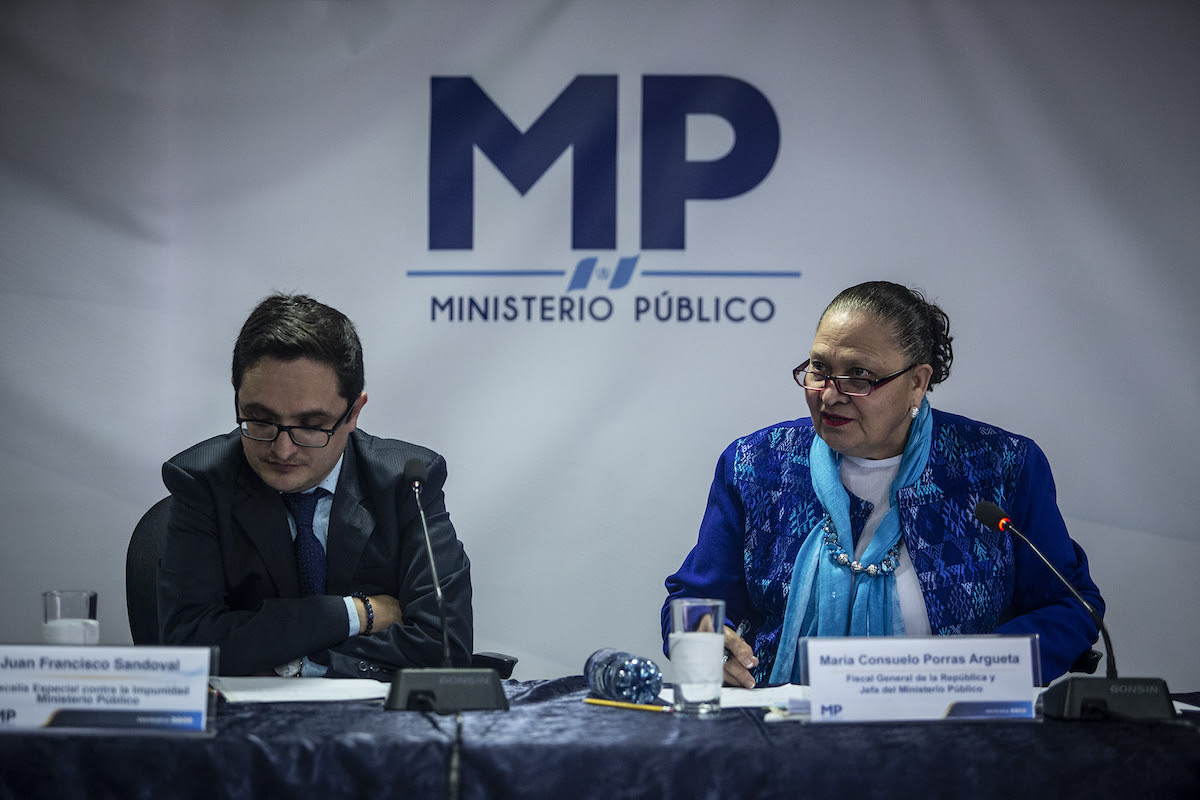 Guatemala, in Brief: The persecution of independent judges and prosecutors pressed onward with the order to put former top state attorney Virginia Laparra on trial. The shady Foundation against Terrorism, lead architect of the legal attacks that have already pushed two-dozen anti-corruption operators into exile, has named among its next targets the human rights ombudsman and three of the country’s most influential judges.

On Tuesday night a Guatemalan judge ordered the trial of Virginia Laparra, the former number-two attorney in the Special Prosecutor’s Office against Impunity (FECI), accused of false testimony and abuse of authority for reporting a judge five years ago on suspicions that he leaked sealed case information to a colleague.

The judge received administrative sanctions but retaliated against Laparra by co-filing a criminal complaint with the Foundation against Terrorism (FCT), a far-right advocacy group. After staying dormant for five years, the complaint was reactivated by Attorney General Consuelo Porras last February, and Laparra was immediately arrested amid an offensive against former FECI employees and independent judges. Legal observers have called the charges against her “spurious” and argued they are designed to make an example of her.

The case underscores that the judicial persecution in Guatemala is far from over as Attorney General Consuelo Porras begins her second term with President Giammattei’s blessing. Two dozen independent prosecutors and judges facing unfounded charges have fled the country in the past year alone under threat of incarceration from her office.

Laparra, who worked for six years under now-exiled FECI chief Juan Francisco Sandoval, has spent over three months in conditions “bordering on torture,” per a psychological evaluation made public by the Associated Press. Her attorneys say her life is at risk as long as she remains in Mariscal Zavala, a military prison for the powerful where convicted criminals who she prosecuted are serving time.

FCT lawyer Raúl Falla Ovalle tweeted on Monday that the foundation would oppose release on bail because of the “risk of escape,” adding an open threat: “Civil death to the ex-FECI.”

The phrase is a response to former CICIG commissioner Iván Velasquez’s 2017 call on Latin American societies to “decree the civil death of the corrupt.” In recent years FCT has become a hatchet-man in the persecution of Guatemalan judges, prosecutors, journalists, and human rights defenders, in an all-out offensive against anti-corruption advocates.

‘Exiled or Behind Bars’

The FCT was a key backer of Attorney General Porras’ May reelection, filing a last-minute motion before the Constitutional Court to pressure the appointment committee into submitting her name to President Giammattei as a finalist despite U.S. sanctions and suspension of cooperation with her office. Her reappointment flared preexisting diplomatic tensions with the United States, drawing new sanctions against her family and ending in Giammattei’s refusal to attend the Americas Summit this week.

Like other FCT attorneys, Falla is sanctioned in the U.S. “Engel List” for “attempting to delay or obstruct criminal proceedings against former military officials who had committed acts of violence, harassment, or intimidation against governmental and nongovernmental corruption investigators.”

The FCT are fervent deniers of the Guatemalan genocide, perpetrated by the Guatemalan military against five Mayan peoples in the early 1980s, according to the Historical Clarification Commission (CEH). The foundation also opposes accountability for other decades-old crimes now being aired in court, like in the ongoing trial of nine retired police and military officials for the illegal detention, torture, killing, and forced disappearance of more than 195 people between 1983 and 1985.

The victims were named in a secret hit list known as the “Death Squad Dossier.”

The foundation is not shy about naming its targets. In mid-April Falla mentioned Laparra in a list posted on social media that included three judges on Guatemala’s High-Risk Tribunals: Pablo Xitumul and Yassmín Barrios, who famously convicted ex-dictator Efraín Ríos Montt in 2013 of ordering the genocide; and Miguel Ángel Gálvez, who is now overseeing the trial for the Death Squad Dossier.

The list also includes the U.S. Assistant Secretary of State Todd Robinson, head of the Bureau of International Narcotics and Law Enforcement Affairs (INL) and former ambassador to Guatemala from 2014 to 2017.

Also present at Laparra’s hearing was Guatemala’s Human Rights Ombudsman Jordán Rodas, who in recent months launched a bid to head the public San Carlos University under the promise of wresting the politically powerful institution from the control of corrupt “mafias.” His candidacy was thwarted by election fraud three weeks ago.

Rodas leaves office in just over two months, meaning that any criminal charges against him would no longer require that Congress revoke his immunity.

On Tuesday, minutes before Laparra’s hearing, Falla turned his attention to Rodas and called out: “We’ll see that you’re exiled or behind bars.”

Thanks for reading. Consider funding independent journalism in Central America, in its most critical hour, at support.elfaro.net.

One response to “From EL FARO ENGLISH: New Targets of Lawfare Against Guatemalan Justice”