From EL FARO ENGLISH: Central America Talks Back to Biden 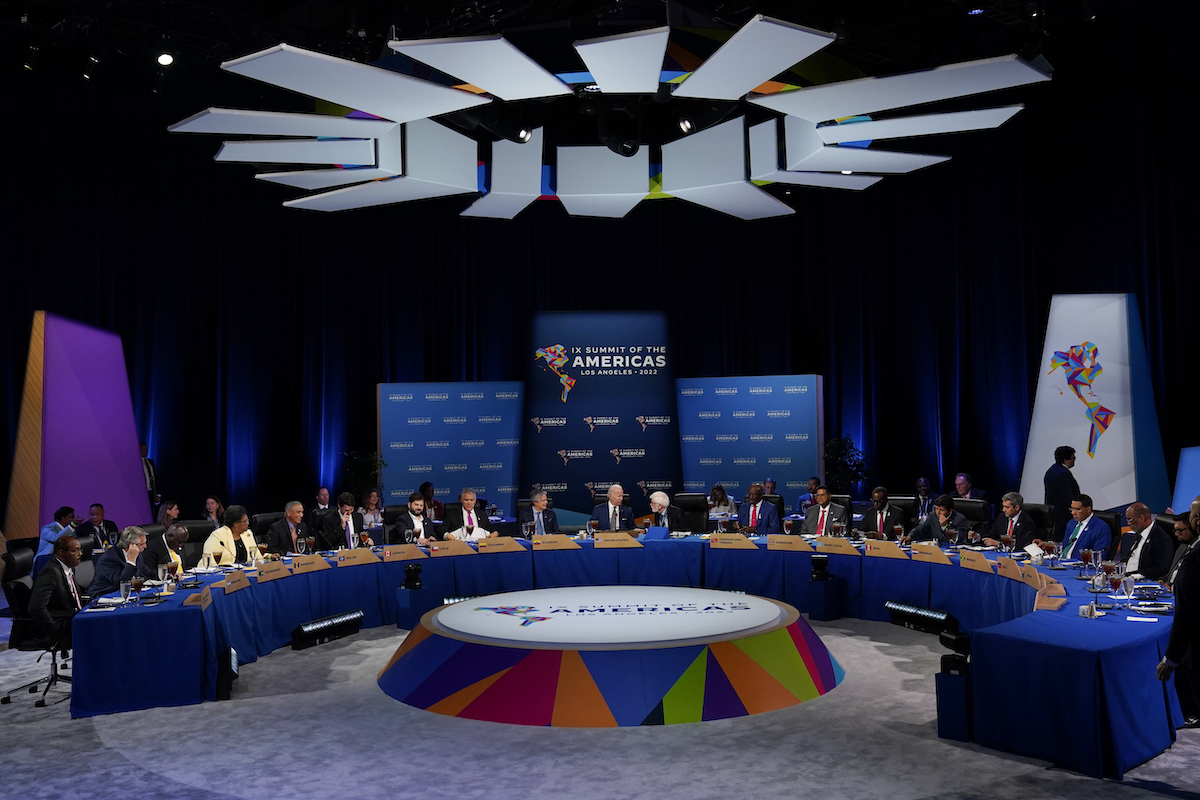 President Joe Biden, center, hosts a leaders retreat and working luncheon with heads of state and government at the Summit of the Americas, Friday, June 10, 2022, in Los Angeles. (AP Photo/Evan Vucci)

Welcome back to El Faro English.

Central America, in Brief: After the no-show of the Northern Triangle presidents at the Summit of the Americas, their foreign ministers gave strident speeches defying Joe Biden and named their countries’ terms for U.S. and regional engagement. El Salvador and Guatemala used claims of sovereignty to spurn international criticism. Honduras reaffirmed its desire for a U.N.-backed anti-corruption commission, but invoked the 2009 coup in a warning that collaboration will hinge on non-meddling in “internal affairs.”

Had Nayib Bukele attended the Summit of the Americas, he was expected to have choice words for Joe Biden and likely would have staged a massive event with the Los Angeles diaspora designed as a public crowning. But the Salvadoran president defied Biden remotely instead. He refused to even pick up a call from Secretary of State Antony Blinken to convince him to attend, according to the New York Times, and on the opening day of the summit, he tweeted that the Organization of American States (OAS) is the U.S. “Ministry of Colonies.”

Attending in his place, Foreign Minister Alexandra Hill doubled down on the criticism.

“Multilateral organisms in the hemisphere must re-found themselves,” she said, “or they will be condemned to losing all credibility and legitimacy and disappearing completely.”

Hill made no reference to the fact that she worked for the OAS in Washington for over a decade in its anti-drug office and used to present herself as a close friend of Secretary General Luis Almagro. She also omitted that Bukele’s administration partnered with the OAS in 2019 to create the international anti-corruption commission CICIES, which later dissolved amid investigations into high-level government corruption.

El Salvador’s speech at the summit was a rebuttal to two years of international criticisms and failed State Department efforts to temper Bukele’s abuses of power.

“El Salvador has set out on a path of no return,” Hill emphasized. “For the first time since we became a republic, in El Salvador we breathe hope, peace, and a desire for progress.”

It’s the same message that Bukele delivered to international observers after he ordered the judicial coup in May of 2021.

Time will tell how the irascible Bukele will react to the near-certain inclusion of close confidants in the next edition of the Engel List this month and DOJ indictment of two of the members of his security cabinet who led negotiations with the country’s gangs and one of whom admitted to helping a leader of MS-13 escape to Guatemala despite a U.S. extradition request.

Guatemala, too, played the sovereignty card in response to the international criticisms of the sweeping persecution of anti-corruption judges and prosecutors. On Tuesday, Norway condemned a new effort to criminalize former attorney general Claudia Paz y Paz, who famously tried ex-dictator Ríos Montt for genocide.

On Monday, U.N. High Commissioner for Human Rights Michelle Bachelet added her voice to the chorus in calling on Guatemala to guarantee the independence of judicial institutions and protection of justice officials.”

In his remarks at the Summit, Guatemalan Foreign Minister Mario Búcaro used a condemnation of the Russian invasion of Ukraine to vindicate “sovereignty.”  But he was referring to the reason that President Alejandro Giammattei did not attend: U.S. sanctions and opposition to the reelection of Attorney General Consuelo Porras.

Giammattei has cast U.S. Democrats as the culprits of its diplomatic problems and used the defense of God and family as a smokescreen when corruption cases arise.

“We’re open to dialogue and ready to listen, but we also need you to listen to us,” Búcaro said. “We cannot allow those with policies, thinking, or inclinations that we do not share to maliciously weaken our principles and values or impose agendas that violate them.”

Honduras is a different story. Whereas recent U.S. corruption sanctions have pushed relations with El Salvador and Guatemala to the brink, Honduras’ non-attendance had to do with Xiomara Castro’s balancing of her interest in international cooperation with the party Libre’s historical ties to left-wing governments like Nicaragua and Venezuela, whose exclusion from the summit led her to withdraw.

In his remarks, Honduran Foreign Minister Enrique Reina called for “respect for the self-determination of peoples and non-interference in other states’ internal affairs,” naming the 2009 military ousting of Castro’s husband, former President Manuel Zelaya, that was later legitimated by the international community.

“In Honduras, it has taken us 12 years and much darkness, death, and pain to return to the democratic path,” he said.

He also offered a carrot, underscoring Castro’s interest in an agreement with the United Nations to create the International Commission against Impunity in Honduras (CICIH), modeled after Guatemala’s now-defunct CICIG.

A major question is whether CICIH would have the political space to support investigations into Zelaya, now a close advisor to Castro. In sworn testimony in March 2021, Devis Rivera Maradiaga, the ex-leader of the Los Cachiros cartel, listed Zelaya among three recent Honduran presidents that he allegedly bribed.

As expected, Panama and Costa Rica offered a respite from the criticisms. To assuage widespread uncertainty about his democratic bona fides and budding-populist manners, the new Costa Rican President Rodrigo Chaves underscored the country’s “political stability” and said he was committed to human rights and curbing forced migration. He did not, however, directly mention U.S. relations.

Upon taking office, Biden named the isthmus as a foreign policy priority and tasked Vice President Kamala Harris with nurturing relations. But the regional leadership complicated any real engagement at first, and now, with the war in Ukraine and domestic problems at home, the administration’s attention has shifted, even as the White House announced in Los Angeles new projects in Central America including $1.9 billion in direct corporate investment and several millions to civil society and the defense of freedom of speech.

None of those funds will be channeled through regional governments.

Thanks for reading. Consider funding independent journalism in Central America, in its most critical hour, at support.elfaro.net.

3 responses to “From EL FARO ENGLISH: Central America Talks Back to Biden”