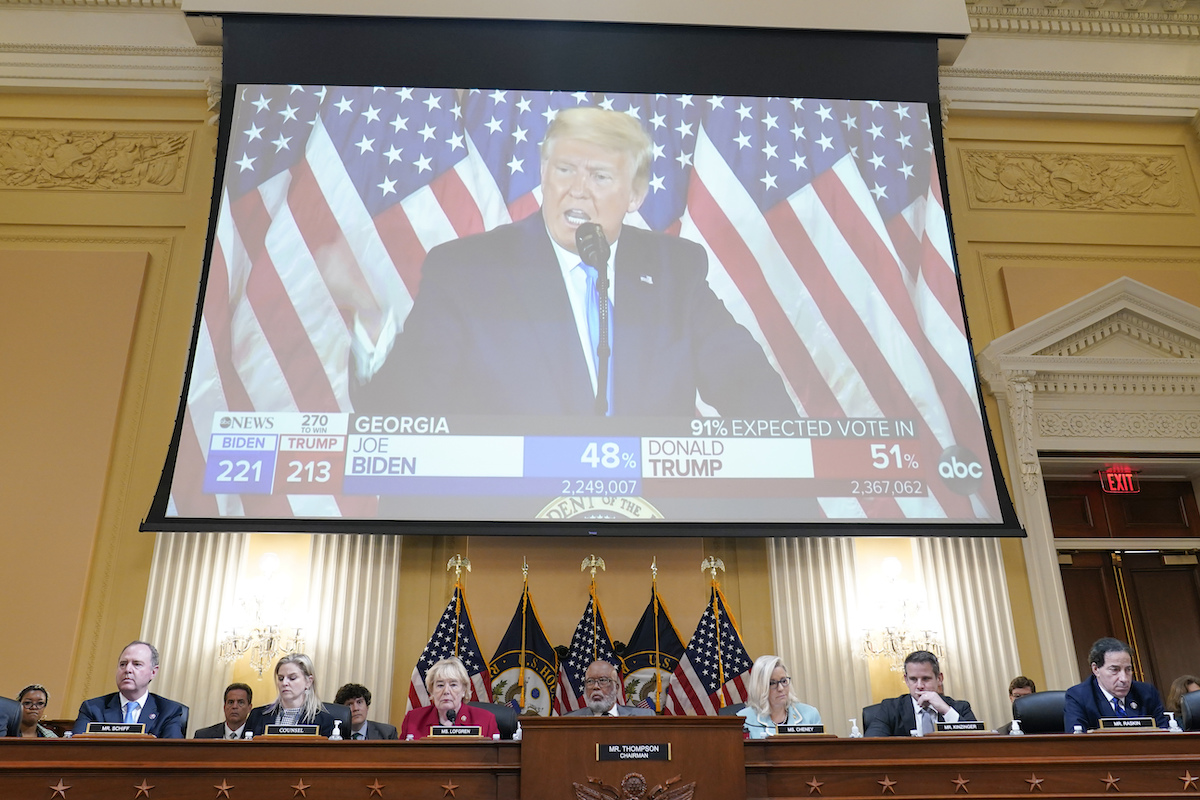 A video exhibit plays as the House select committee investigating the Jan. 6 attack on the U.S. Capitol continues to reveal its findings of a year-long investigation, at the Capitol in Washington, Monday, June 13, 2022. (AP Photo/Susan Walsh)

WASHINGTON, D.C. — The fourth made-for-TV hearing was held Tuesday by the House Select Committee to investigate the January 6th attack on the Capitol.

The hearing focused on the pressure campaign by Trump allies against state and local officials to overturn the election results that made Joe Biden president.

“Mr. Trump was told by his own advisers that he had no basis for his stolen election claims yet he continued to pressure state officials to change the election results,” said Rep. Liz Cheney (R-WY) in her opening statement.

“We cannot let America become a nation of conspiracy theories and thug violence.” — Liz Cheney in her opening statement today.

Rep. Adam Schiff (D-CA) led questioning Tuesday of the committee’s witnesses, which included a series of highly produced video montages of intimidation and threats by Trump supporters against election officials.

“The punishment for treason is death, “said an armed dissident in a cowboy hat looking directly into the camera in one of the clips presented by the committee.

Schiff began by asking Speaker Bowers about the former president’s claim that Bowers had said the election was not legitimate. “Anywhere, anyone, anytime that said I said the election was rigged … that is untrue,” said Bowers, who then recounted to the committee in painstaking detail the interactions he’d had with the White House in the weeks after the election.

“Do you have names?” Bowers said he asked Giuliani, who said that the Trump team did have names. But Giuliani never provided any names to Bowers, according to the Arizona House Speaker.

"We've got lots of theories, we just don't have the evidence," Speaker Bowers recalls Rudy Giuliani having told him.

“It is a tenant of my faith that the Constitution is divinely inspired,” Bowers said as to why he refused to overturn the Arizona election results to favor Trump, despite several attempts by the Trump team, lead by Giuliani, to pressure him to do so.

BOWERS on when he asked GIULIANI for proof of voter fraud in the 2020 election in Arizona: "He said, 'We've got lots of theories, we just don't have the evidence.'"

Bowers confirmed that Rep. Andy Biggs (R-AZ) had sent him a letter asking him to overturn the election.

In a previous hearing, the committee said that some members of Congress had asked Trump for a presidential pardon for their role in the January 6th insurrection. It is unclear if Biggs is among those members.

In Arizona, fake electors gathered and sent a fake election certificate to the Senate in the hopes that it would be given to then Vice President Mike Pence in the hope of stealing Arizona’s electoral count for Trump, according to committee testimony.

The next witnesses to testify were Raffensperger and Sterling from Georgia. Raffensperger testified that President Biden won the presidential election in Georgia by “approximately 12,000 votes.”

Raffensperger, always on brand, starts off with data on polling place wait times

The committee then went to great lengths to disprove the debunked Trump campaign lie that ballots were improperly tampered with in Fulton County, Georgia.

Sterling walked the committee through the different methods used to tally the votes and how none of the patently false allegations of election misconduct levied by the Trump campaign held water.

Moreover, Sterling argued, the Trump campaign was aware of the lies they were spreading by mischaracterizing the video footage of election workers processing ballots to spread misinformation about the work being done in Georgia.

"I lost my temper but it seemed necessary at the time," @GabrielSterling says recounting his speech denouncing Trump's election conspiracy theories. It was inspired by election officials receiving images of nooses. https://t.co/MCRSEBn5L2

Trump’s own attorney general, William Barr, told the select committee in video testimony that the allegations of voter fraud spread by Giuliani “had no merit.”

Nevertheless, Trump claimed in phone calls with Georgia election officials that he won by “hundreds of thousands” of votes, then went so far as to ask election officials to “find” the votes before “a very important date” (January 6) when the election would be certified by Congress.

Trump even went so far as to retweet supporters suggesting that Raffensperger would be criminally liable for refusing to back the former president’s election lies. “That’s a big risk to you and to Ryan, your lawyer,” said Trump, in video evidence presented by the committee.

Raffensperger testified that after refusing Trump’s coercion, he and his family were subject to a series of death threats, including “disgusting” threats of a sexual nature against his wife and a break-in at his daughter-in-law’s home.

Will election officials at the highest or most micro level ever be safe again? #January6thCommitteeHearings

A fifth hearing by the House select committee investigating the January 6th attack on the Capitol is scheduled for Thursday.