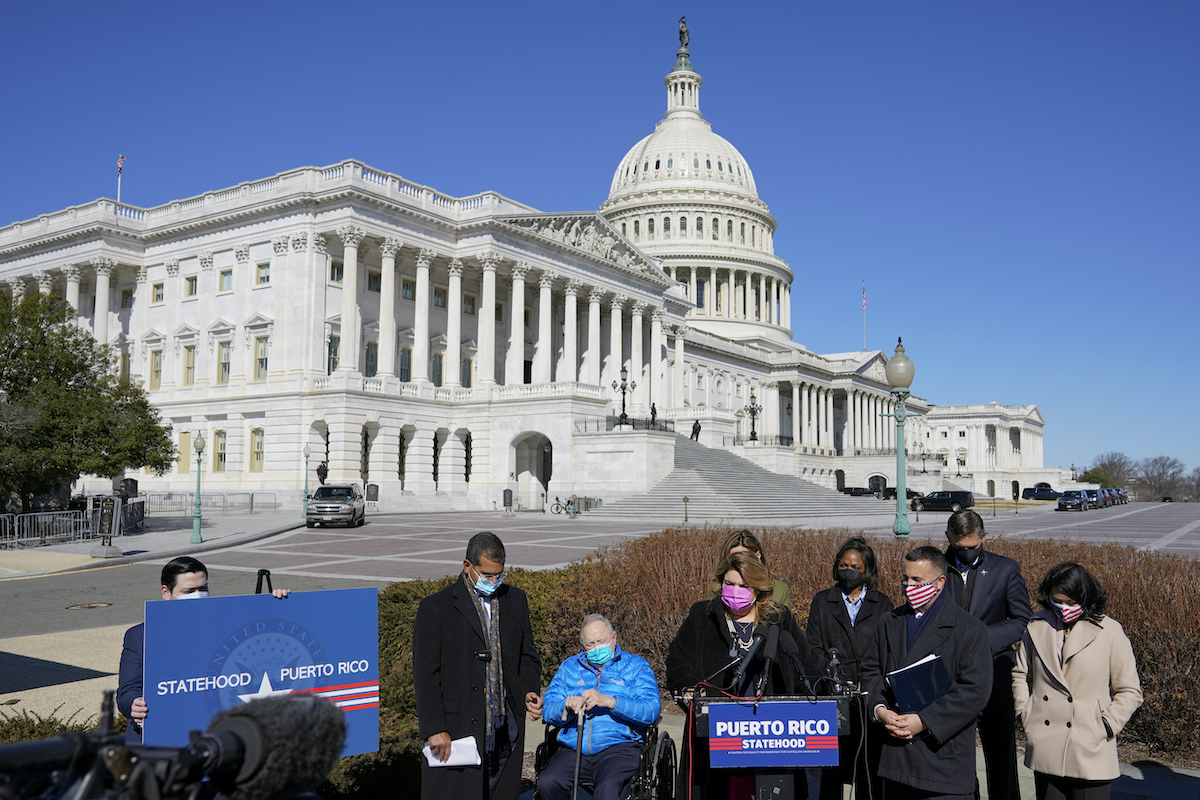 Fearing that one of the two other status options may win, specifically the “Free Association” option, members of the Puerto Rican statehood movement plan to pressure House Natural Resources Committee chair Rep. Raúl Grijalva (D-AZ) to revise the language of a draft bill that looks to resolve Puerto Rico’s 100-plus status issue once and for all, according to a draft letter provided to Latino Rebels by an anonymous source directly familiar with the proceedings.

Introduced in May after weeks of negotiations between the two camps, the Puerto Rico Status Act calls for a binding plebiscite that would ask the Puerto Rican people to decide between three decolonization options: statehood, free association, or independence. The U.S. Congress, which is the supreme authority in the U.S.-owned territory of Puerto Rico, would then be forced to act on whichever option the citizens of Puerto Rico choose.

A letter drafted by the Puerto Rico Statehood Action Network (PRSAN) and shared with Latino Rebels on Wednesday calls on Chairman Grijalva and Ranking Member Bruce Westerman (R-AR) to “consider making several critical improvements to the legislation” before it moves forward.

“Our recommendations are meant to ensure that the three choices presented to voters in Puerto Rico are defined as clearly as possible… that the most important implications of those choices are clear, and that significant ambiguities in the current PRSA [Puerto Rico Status Act] discussion draft can be eliminated or greatly mitigated,” the letter reads. “Our proposed changes are meant to ensure that voters can provide informed consent, which is necessary to guarantee that the plebiscite results have legitimacy and obtain the greatest degree of public acceptance possible both in Puerto Rico and in the eyes of the U.S. federal government.

“However,” the letter adds, “if the choice is between the implementation of these proposed changes or Congress not taking action to approve the PRSA, we would much prefer the approval of the current discussion draft over the perpetuation of the unequal, unjust and fundamentally colonial current territory status.”

“Use of the word ‘Sovereignty’ as the main descriptor for the option of ‘Free Association’ is insufficient to ensure that voters understand that for constitutional purposes this option is a form of independence [emphasis theirs] outside the protection of the U.S. Constitution,” the authors explain. “The bill must make clear to voters that under ‘Free Association’ Puerto Rico must be sovereign under its own constitution so that it can function as a fully independent nation if the ‘Free Association’ is terminated by either party acting unilaterally or simply expires.”

Free association, as the U.S. government maintains with the former U.S. territories of Palau, Micronesia, and the Marshall Islands in the South Pacific, describes a compact between two independent nations wherein the citizens of each enjoy certain rights and privileges not available to the citizens of other nations. Citizens of Palau, Micronesia, and the Marshall Islands, for example, have access to certain U.S. federal programs under the Federal Emergency Management Agency, Pell Grants, and enjoy duty-free imports.

Citizens of each are also allowed to live and work in the United States, and vice versa.

“As a treaty-based relationship voters must understand that ‘Free Association’ is not a permanent constitutionally defined status, instead it is defined by the terms of the treaty and continues only as long as the treaty creating the association remains in effect,” the letter continues. “We appreciate that the bill specifies that under ‘Free Association’ either party can terminate the relationship at any time, but the bill must explicitly inform voters that such termination will result in Puerto Rico’s full and complete independence.”

The second recommendation involves the proposed “Nonpartisan Voter Education Campaign” ahead of the plebiscite, which would be held in November 2023. The authors wish to make it clear that “Free Association” is a form of independence, and that should the voters of Puerto Rico choose “Independence” or “Free Associations,” then the U.S. citizens living in Puerto Rico “will be required to report all taxable income to the Internal Revenue Service and to pay federal taxes as U.S. citizens living abroad.”

The third recommendation involves U.S. citizenship in an independent Puerto Rico, either in a free association with the United States or not.

“The citizenship provisions in the PRSA must make it absolutely clear to Puerto Rico’s voters that, notwithstanding any implicit or explicit statutory guarantees made in the PRSA, as a sovereign nation the U.S. will always retain control over its citizenship policy. This includes the possibility that a future Congress could mandate the U.S. citizens make an election between retaining U.S. citizenship and obtaining a new Puerto Rican citizenship should they choose to remain in an independent Puerto Rico with or without free association.”

Should the voters choose “Free Association,” anyone born in Puerto Rico to U.S. citizen parents after the Articles of Free Association goes into effect would be granted U.S. citizenship at birth if one parent resided in the United States.

The authors of the letter want to make clear that such citizenship is not as constitutionally secure as it would be under statehood, and that the goal of the U.S. government would be to phase out U.S. citizenship in an independent Puerto Rico with or without free association.

The third recommendation stresses the fact that “Free Association” is really another term for independence, and that should the Bilateral Negotiating Commission proposed by the draft bill fail to establish a compact of free association between the U.S. and Puerto Rico governments, Puerto Rico would be fully and completely independent.

“Puerto Rico’s voters must be made fully aware that the only constitutionally guaranteed option their vote for ‘Free Association’ offers them is that of ‘Independence,’ the authors state.

The anonymous source, who claims to be part of the statehood movement and close to the discussions being had within the Puerto Rico Statehood Action Network, describes “attempts to mix Free Association with Independence.”

“It seems to me they are desperate because they fear Free Association might win,” the source said.

Latino Rebels reached out to George Laws, executive director of the Puerto Rico Statehood Council, to verify the authenticity of the draft letter.

“I can confirm that the Puerto Rico Statehood Action Network (PRSAN) is preparing to send a letter to the Chairman and Ranking Member of the House Natural Resources Committee about the PR Status Act,” Laws wrote in an email. “The letter does not seek to include language that in your words, ‘blurs the line between the “Free Association” and “Independence” options in the Puerto Rico Status Act.’ Instead, the letter seeks to clarify that under the U.S. Constitution ‘Free Association’ is fundamentally a form of independence. The letter makes this point among other clarifications that the PRSAN believe the Committee should consider to ensure the informed consent of voters in Puerto Rico.”

“I support Statehood, but not the ways the PNP [the pro-statehood New Progressive Party] want to go about it, so I turned,” the source noted.

“If statehood wins, I want it to win on the basis of the decision of our people and their judgment/knowledge,” they add. “No one of us wants our Abuela to be fooled next time she goes out and votes. This time being a ‘no way back’ binding legislation.”

UPDATE: Latino Rebels asked Rep. Nydia Velázquez (D-NY) about attempts by the statehood movement to alter the language of the draft bill. “Well, they’re not in the room,” she said. “So we will be the ones negotiating the language.”

Pablo Manríquez contributed to this reporting.