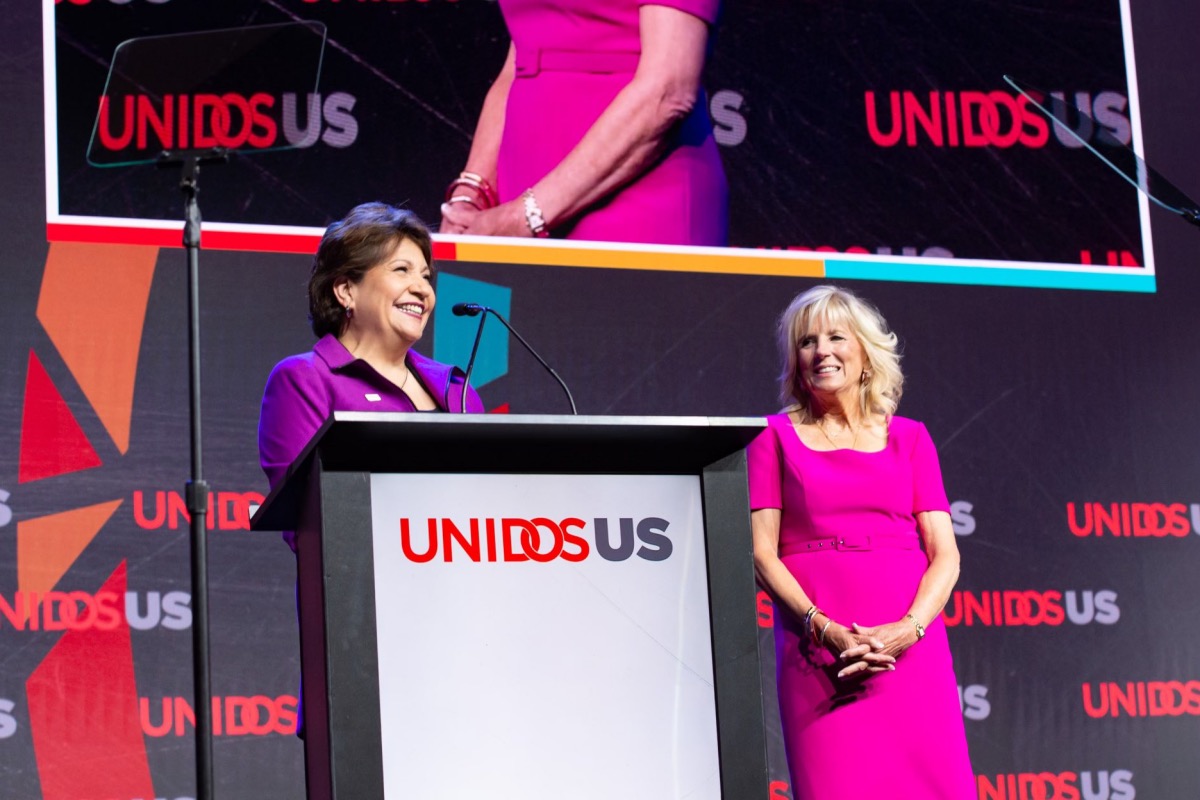 “The First Lady apologizes that her words conveyed anything but pure admiration and love for the Latino community,” tweeted Jill Biden’s press secretary, Michael LaRosa.

The First Lady apologizes that her words conveyed anything but pure admiration and love for the Latino community.

During her speech at the 2022 UnidosUS Annual Conference in San Antonio, Texas, Dr. Biden took a moment to recognize the work done by the organization’s former president, Raúl Yzaguirre, who last week received the Presidential Medal of Freedom at the White House.

“Raúl helped build this organization with the understanding that the diversity of this community —as distinct as the bogedas [sic] of the Bronx, as beautiful as the blossoms of Miami, and as unique as the breakfast tacos here in San Antonio— is your strength,” Biden said Monday.

Critics also blasted the First Lady for her mispronunciation of “bodega,” a kind of convenience store typically owned and operated by Latinos that is a fixture in New York City.

The gaffe, captured on video, has already gone viral, receiving millions of views on social media in less than 24 hours.

First lady Jill Biden’s office issued an apology for her speech, after she was criticized for stereotyping the Hispanic community. #news #diversity #Biden #latinostiktok #spanishtiktok #yahoonews

The National Association of Hispanic Journalists (NAHJ) was quick to criticize Biden’s remarks.

“Using breakfast tacos to try to demonstrate the uniqueness of Latinos in San Antonio demonstrates a lack of cultural knowledge and sensitivity to the diversity of Latinos in the region,” said the group in a statement last night.

NAHJ encourages @FLOTUS & her communications team to take time to better understand the complexities of our people & communities.

We are not tacos.

Our heritage as Latinos is shaped by various diasporas, cultures & food traditions.

Do not reduce us to stereotypes. pic.twitter.com/KQIq5gwsht

Nora López, president of the NAHJ, said she understood the First Lady’s sentiment but pointed out that her comment could have been better executed.

“We get it —she was trying to say we’re unique— but her team used an out-of-touch comparison to make what otherwise could have been a nice compliment if she had any speechwriters with any cultural knowledge. It was lazy and dumb,” López told Latino Rebels.

“Would we say Americans are as unique as its hot dogs?” López continued. “As journalists, we strive to find more accurate and appropriate words to describe people rather than rely on broad stereotypes. Sure, this is a political speech, but we felt it was justified to call out a stereotype about Latinos when we saw it.”

The apology comes just a day before Mexican President Andrés Manuel López Obrador is scheduled to meet with President Joe Biden to discuss immigration and trade, among other issues.

Jill Biden says Hispanics are as “unique” as tacos and calls bodegas “bogidas.”

No wonder Hispanics are fleeing the Democratic Party! pic.twitter.com/rhBB1pSNvZ

Others in attendance felt the moment was blown out of proportion. Marissa Calderón Jiménez, who was in the room during the speech, said everyone clapped and that she did not find it offensive.

“The right is REEEAAALLY stretching it lol,” she tweeted.

Janet Murguía, president and CEO of UnidosUS, appeared happy to have the First Lady speak at the event.

“So honored to host @FLOTUS at our Annual Conference today in San Antonio,” she tweeted after Dr. Biden spoke. “She has been a great educator in, and a great amiga to, our community for years. Privileged to call her a friend.”

Although she described the occurrence as a “light moment” in Dr. Biden’s speech, where several people applauded and cheered, Murguía told Latino Rebels she recognized that the comment could have been better articulated.

“I’m not dismissing it. I just think some people are taking advantage of her remarks and using them for political purposes,” she said.

“The First Lady’s comment, based on the reaction of the audience of almost 15000 attendees, was well received and very positive,” Murguía added. “For those of us who were there, we took the comment how it was intended: to reflect the diversity of the Latino community.”