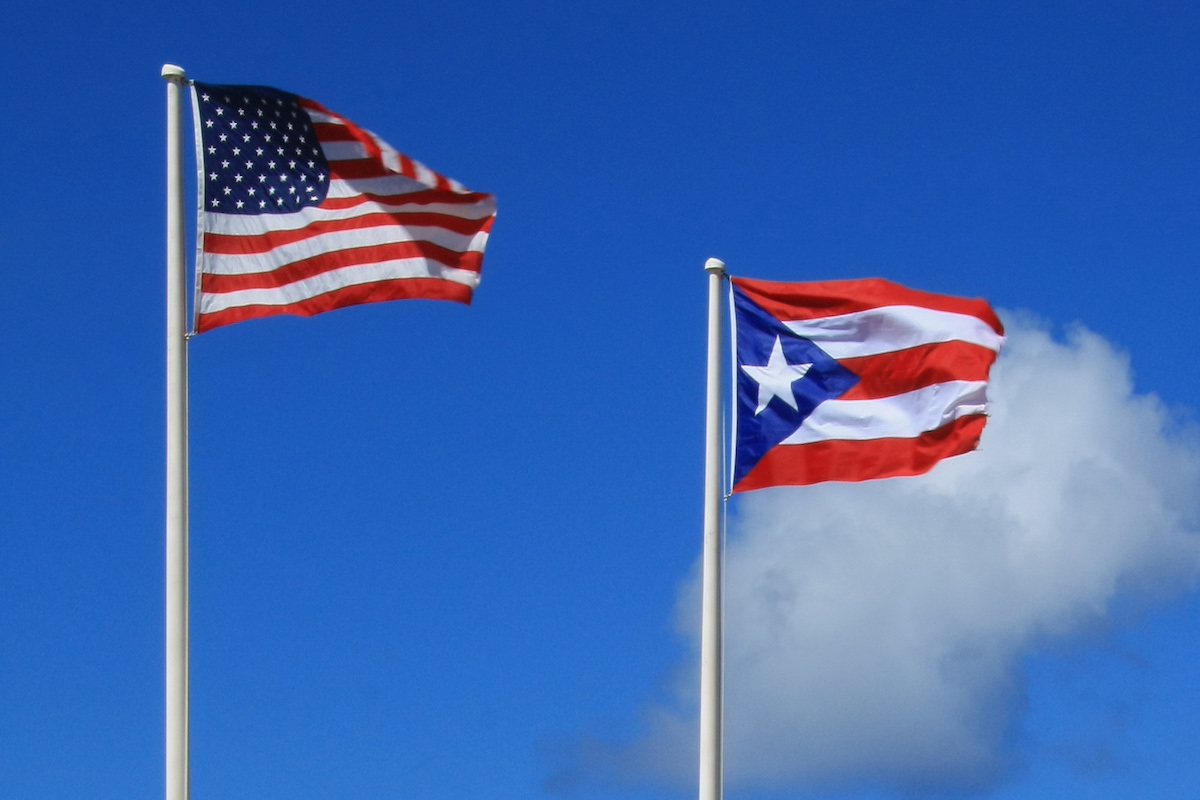 The U.S. and Puerto Rican flags

UPDATE, 8 p.m ET: The temporary waiver was announced by the U.S. government.

PEÑUELAS, Puerto Rico — An oil tanker loaded with much-needed diesel fuel is treading water off the coast of Puerto Rico, unable to dock because a 1920 law, known as the Jones Act, requires ships to be U.S.-owned if they want to load or unload.

Meanwhile, fuel on the island grows scarcer by the day.

The British Petroleum vessel, carrying 300,000 gallons of diesel and bearing flag of the Marshall Islands, has been idling in Puerto Rican waters since Monday, as first reported by Las Noticias TeleOnce. The ship has requested a Jones Act Waiver but the request is still pending.

In Salinas, this is how long the line for gas stations are. I’ve passed through a couple others that were completely out of gasoline. pic.twitter.com/dXZe3B1anS

Long gas lines are common on the southwest parts of the archipelago since Hurricane Fiona hit. Grocery stores and restaurants are throwing away refrigerated food or closing entirely because they do not have enough diesel to keep generators running.

Nearly 50 hospitals across Puerto Rico are currently running on diesel generators to keep their lights on while medical workers treat patients.

Everyone from Gov. Pedro Pierluisi, local labor leaders, and members of the U.S. Congress has called for the Jones Act to be waived in the face of the devastation left by Hurricane Fiona, which swept over the island on Sunday, September 18.

“The supply of diesel is decreasing rapidly and earlier than anticipated, Gov. Pierluisi said in a press release on a letter he sent to President Joe Biden asking that he temporarily waive the Jones Act.

“I am soliciting the Department of Homeland Security for a temporary waiver to the requirements of the Jones Act to ensure that we have sufficient supplies of fuels such as diesel, and thus electric power service is not compromised at any critical facility, while companies can also guarantee the continuity of their services,” Gov. Pierluisi said.

Gov. Pierluisi previously stated that Puerto Rico did not need “humanitarian aid” because it “wasn’t really necessary” and that he didn’t want “logistical situations in Puerto Rico’s main port.” His administration also previously held that there was enough diesel on the archipelago and that their main problem was the distribution of fuel.

White House officials have said that the Biden administration does not have the authority to waive the Jones Act in Puerto Rico because of a law passed by Congress in 2020 to crack down on broad waivers. Biden does have the power to issue one-time waivers, as he did in 2021 when he granted two Jones Act waivers to ease a fuel crunch after the Colonial Pipeline suffered a cyberattack.

The Washington Post reported on Wednesday that White House officials were pressing agencies to grant a waiver allowing Puerto Rico to receive the shipment of fuel.

“President Biden is personally tracking the matter and supports granting the waiver,” write reporters Jeff Stein and Toluse Olorunnipa, citing a source close to the matter.

Biden has been a voiceful supporter of the Jones Act, promising to “continue my strong support for the Jones Act” while on the campaign trail.

I just led 7 Members of Congress to @SecMayorkas calling for the Jones Act to be temporarily waived to expedite supplies being shipped into the Island’s ports in order to accelerate Puerto Rico’s recovery from Hurricane Fiona. pic.twitter.com/AytxviufQl

A DHS spokesperson told Latino Rebels that the agency “will continue to examine individual requests for Jones Act waivers on a case-by-case basis and in consultation with the Maritime Administration, Departments of Defense, and Energy.”

Members of the U.S. Senate were divided on Wednesday when asked by Latino Rebels if they supported temporarily waiving the Jones Act to facilitate the recovery effort in Puerto Rico.

GOP Sens. Ted Cruz (TX) and Rick Scott (FL) agree with Johnson, and Sens. Marco Rubio (R-FL) and Mike Lee (R-UT) have expressed their support for a waiver. “You’ve gotta get the fuel in,” Scott said.

“My first thought would be to do whatever we can in an emergency situation to help the people of Puerto Rico,” said Sen. Mike Rounds (R-SD). “I’m not sure if our Democrat colleagues would go along with that.”

“I think there are many ways to help Puerto Rico,” said Menendez. “What we’ve gotta do is kick the ass of the energy companies to get the energy on for the people. They have the money to do it.”

LUMA Energy, the unpopular U.S.-Canadian company that runs Puerto Rico’s electrical grid, has come under scrutiny on the island and off by Puerto Rican voices from Bad Bunny to Rep. Ocasio-Cortez.

“I don’t see why the Jones Act would stop us from getting aide into Puerto Rico,” said Tester.

When Latino Rebels gave the example of the diesel tanker parked offshore, Tester said; “They should have known that before they even went there.”

Sen. Tim Kaine (D-VA) told Latino Rebels that he visited Puerto Rico after Hurricane María devastated the island five years ago. “I spent some time in the harbor there talking to the people who work there, and they were actually not in favor of getting rid of the Jones Act,” said Kaine, adding: “I don’t consider myself an expert on the subject.”

Sen. Brian Schatz (D-HI) said President Biden might move unilaterally to waive the Jones Act. “I’m in contact with the White House, and I’m hopeful that they’ll have this resolved very, very shortly,” he said.

The Jones Act, a key part of Pres. Biden’s “Made in America” plan, is backed by U.S. shipping industry, both the businesses and the labor unions, which have repeatedly defended federal shipping restrictions.

The American Maritime Partnership, which represents U.S.-flagged vessel operators and unions under the Jones Act has sent a letter to Secretary Mayorkas explaining why the Jones Act should not be waived, according to the Washington Post.

For the U.S. shipping industry, the Jones Act represents an assurance that it can monopolize the carrying of cargo between U.S. ports.

“There is a ship waiting right there and there’s no excuse” not to waive the Jones Act, said Federico de Jesús, senior policy advisor for Power 4 Puerto Rico, a coalition of Puerto Rican diaspora leaders.

Section 27 of the Merchant Marine Act of 1920, better known as the Jones Act, requires all goods transported between U.S. ports be shuttled on U.S.-built and U.S.-flagged ships, alongside being owned and crewed by U.S. citizens and permanent residents. Originally created during World War I to support the U.S. shipping industry, the Jones Act prevents any foreign-built or foreign-flagged ship from engaging in trade between U.S. coasts unless it is given a waiver by the president of the United States, which is what many Puerto Ricans are hoping will happen in the next few days.

Puerto Rican politicians, widely divided on issues of Puerto Rico’s territorial status, are in agreement that the Jones Act only harms Puerto Rico’s ability to import goods. About 85 percent of the food Puerto Rico eats is imported into the archipelago, which means that Puerto Ricans —44 percent of whom live in poverty— often face high prices when they go to the grocery store.

Puerto Rico also imports all of the petroleum it uses for energy, causing it to have higher electricity rates than in the United States, averaging 22.7 cents/kWh for the average consumer.

“Puerto Ricans have been subjugated for decades. People need to understand that money is being extracted from Puerto Rico,” Power 4 Puerto Rico director Erica González told Latino Rebels. “It works as a regular tax.”

The high cost of shipping to Puerto Rico —about $1.5 billion annually— is passed on to Puerto Rican consumers, according to Power 4 Puerto Rico, which has long held that Puerto Rico be permanently exempt from the Jones Act.

More than a week after Hurricane Fiona hit Puerto Rico, official numbers from LUMA Energy state that a little less than a third of the 3.3 million people on the archipelago still do not have electricity. Many Puerto Ricans do not trust these numbers, though, given that electricity is going in and out in many municipalities. The communities without power are spread throughout the island but mostly concentrated in the southwest, where Fiona made landfall.

Over 10 percent of all Puerto Ricans currently do not have running water. Similar to the power situation, many of those who have water experience spotty service.

Puerto Rico was still struggling to recover from Hurricane Maria when it was hit by Hurricane Fiona, a Category 1 storm that dumped more than 27 inches of water in the archipelago’s central region. The sheer amount of water caused “catastrophic flooding” in multiple municipalities, according to Gov. Pierluisi.

There have been 21 deaths in Puerto Rico linked to Hurricane Fiona, which is estimated to have caused $1 billion in damages.

Disaster relief efforts are currently being conducted throughout the archipelago by all levels of government, including the Puerto Rican National Guard and the Federal Emergency Management Agency.

Pablo Manríquez contributed to this report from Washington.