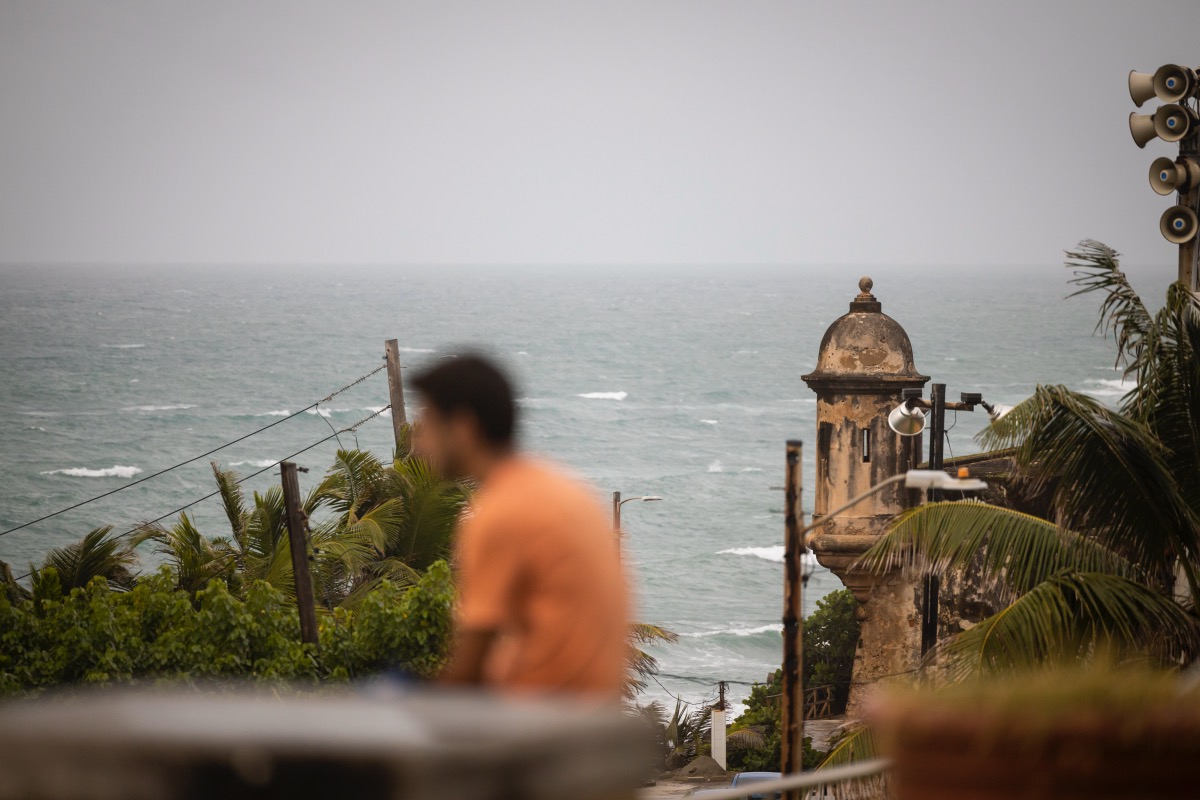 A man stands in front of a beach in San Juan before the arrival of Tropical Storm Fiona, which would make landfall in the southwestern tip of the island as a Category 1 hurricane, Puerto Rico, Saturday, September 17, 2022. (AP Photo/Alejandro Granadillo)

PONCE, Puerto Rico — As Hurricane Fiona bore down on Puerto Rico two weeks ago, the U.S.-imposed fiscal control board and the U.S.-based judge who handles the public electric utility’s debt restructuring deal forced Puerto Rican lawyers to file motions even as the archipelago was experiencing an island-wide blackout.

“I have to decide whether I get into the line for gasoline for my car and the generator, or if I go into the office in the dark with my phone’s [wi-fi] hotspot to file,” Jessica Méndez Colberg, vice president of the law firm Bufete Emmanuelli, C.S.P., told Latino Rebels from her office in Ponce, which still has no power and only intermittent running water.

After mediation talks over PREPA’s $9 billion debt restructuring fell through without a deal, the Financial Oversight and Management Board for Puerto Rico (FOMBPR) —known by Puerto Ricans as “la Junta”— filed an Urgent Motion at midnight on Saturday, September 17, while Hurricane Fiona’s landfall on Puerto Rico was imminent. The motion began a process for opposing parties to file responses and objections.

The Urgent Motion left Bufete Emmanuelli scrambling to contact its clients, scattered across different parts of Puerto Rico, many of whom had already hunkered down due to the hurricane bearing down on them.

Puerto Rico had been under a tropical storm warning since the previous Friday, and Gov. Pedro Pierluisi declared a state of emergency that Saturday.

Fiona made landfall on the southwest of the archipelago near Punta Tocón in Cabo Rojo at 3:20 p.m. on Sunday, September 18. It brought 110 miles per hour winds and dumped more than 27 inches of rain across the archipelago’s central region, causing “catastrophic flooding,” according to Gov. Pierluisi.

Ponce, where Méndez Colberg is based, received more than 31 inches of rain. The hurricane immediately plunged all 3.2 million Puerto Ricans into a country-wide blackout. More than 750,000 customers lost water, as well.

There are currently 21 deaths in Puerto Rico linked to Hurricane Fiona, which is estimated to have caused $1 billion in damages.

District Court Judge Laura Taylor Swain, based in New York, issued an order that gave opposing parties until Monday, September 19, at 9:00 a.m. to file their responses to the Urgent Motion.

“I was feeling the strength of the hurricane when I was supposed to be filing,” Mendez Colberg said in a phone call that continued to cut in and out. “It was a total insensibility to what is happening on the island.”

Bufete Emmanuelli filed another Urgent Motion requesting them to hold the process in abeyance until the country-wide emergency had passed. The first few paragraphs of their motion condemned the “lack of sensibility for what the people of Puerto Rico were going through,” according to Méndez Colberg.

Judge Swain denied Bufete Emmanuelli’s Urgent Motion and maintained they had to file “timely” according to the schedule that had already been outlined.

As the hurricane neared, Bufete Emmanuelli was able to scramble together a response and file it before the entire archipelago lost power.

“We have no idea when electricity will be restored,” Méndez Colberg said.

PREPA bondholders also filed to dismiss PREPA’s Title III case while the hurricane passed. Title III of the Puerto Rico Oversight, Management, and Economic Stability Act (PROMESA) allows PREPA to work with its creditors to adjust its owed debts. If the case were to be dismissed, it would mean the bondholders are owed 100 percent of the debt they hold without PREPA being able to restructure any of its debt.

Judge Swain has since denied the PREPA bondholders’ petition and ordered a new round of negotiations for all parties to come to a consensus on the restructuring of PREPA’s debt. She also ordered the FOMBPR to present a debt restructuring plan no later than December 1. However, the FOMBPR is still able to go to the courts to determine how much money the bondholders are owed.

“The principal actors do not live here and they do not care what happens to the people here,” Méndez Colberg told Latino Rebels. Most of the FOMBPR’s board members do not currently live in Puerto Rico, according to the board’s website.

Méndez Colberg says the PREPA bondholders filed the motion to dismiss because if they were to lose the lawsuit, it would expose them to losing “the majority of their money.”

Bondholders and bond insurers asked Judge Swain to end PREPA’s bankruptcy or appoint a receiver to raise electricity rates to cover PREPA’s operating and debt costs, according to court documents. If Judge Swain declines the motion, they insist that the court impose a November 1 deadline for the FOMBPR to file a new debt restructuring plan.

PREPA’s debt restructuring relies on finding common ground between Puerto Ricans —44 percent live in poverty and suffer constant blackouts— paying the public utility’s debt while compensating bondholders, some of whom have not been paid in eight years.

Whether PREPA’s bonds are backed by its gross revenue or secured by a so-called “sinking fund” held by a bond trustee has been a main point of contention during negotiations, according to court documents. Bondholders believe they are entitled to PREPA’s gross revenue.

PREPA is Puerto Rico’s main supplier of electricity. With 1.5 million customers, it is one of the biggest public power utilities in the United States. Negotiations with bondholders and insurance companies have been ongoing since 2014 before the Puerto Rican government declared and later exited bankruptcy.

“I do not have enough [internet] bandwidth to connect to the hearing through Zoom,” Méndez Colberg said. She is still working out of her office, where she has three wi-fi hotspots from three different phone companies just to be able to continue working and filing motions for the case.

The FOMBPR did not respond to Latino Rebels’ request for comment.