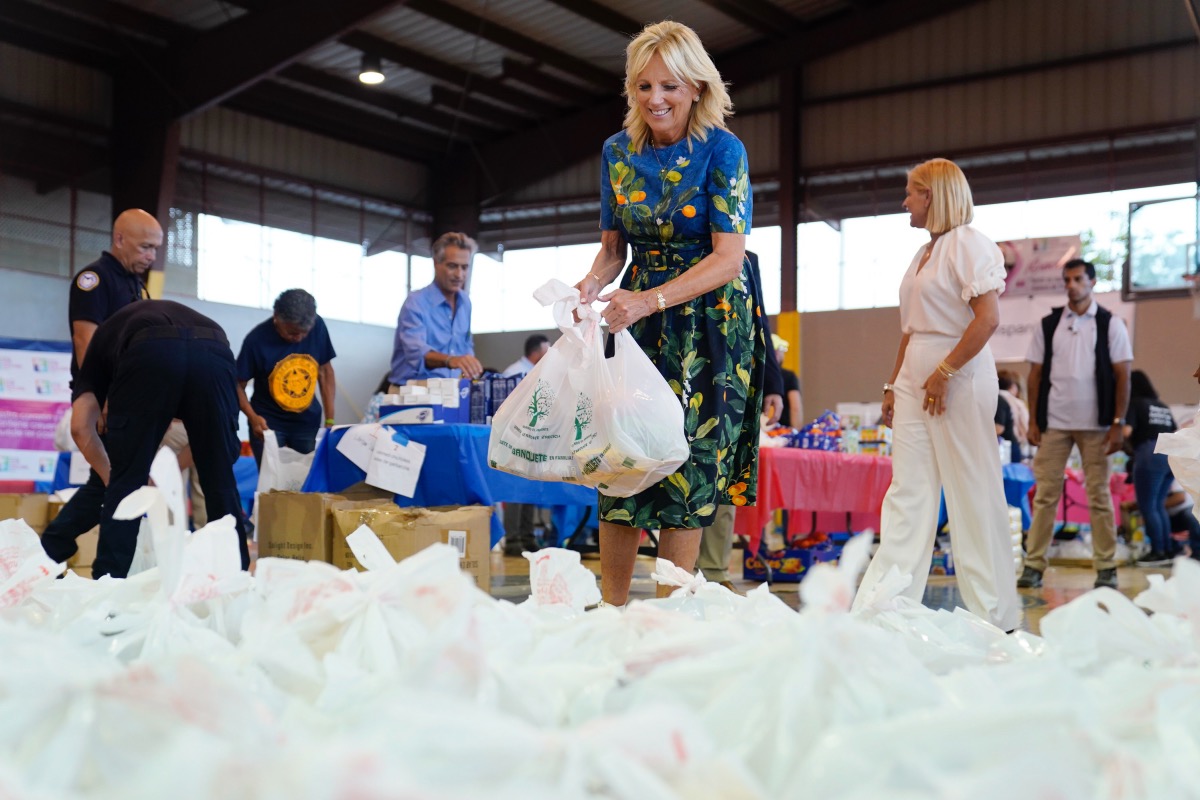 PONCE, Puerto Rico — President Joe Biden visited Puerto Rico on Monday to announce new hurricane relief projects, two weeks after Hurricane Fiona battered the archipelago. Tens of thousands remain without power, and even more worry that aid promised by Biden will be too little too late.

The president committed more than $60 million from the bipartisan infrastructure bill passed last year to “shore up leeves and floodwalls” and build an early flood warning system, among other potential projects.

Rep. Jenniffer González (R-PR), Puerto Rico’s non-voting member of Congress, later confirmed that the $60 million would be for the canalization of the Guayanilla River west of Ponce on the southern coast.

“We want to be treated in the same way as our fellow Americans in the states in times of need,” Gov. Pedro Pierluisi said before Biden spoke.

Hurricane Fiona streaked through Puerto Rico on September 18, unleashing devastating floods along much of the southwest and plunging the 3.3 million residents into darkness only a day before Hurricane María’s five-year anniversary. The archipelago never genuinely recovered from María, and many were caught off-guard by the Category 1 hurricane.

While power has been restored to 90 percent of the archipelago, many complain that it goes in and out.

Biden declared an Expedited Major Disaster Declaration for 55 out of 78 municipalities, shifting 100 percent of the costs of hurricane relief onto the federal government. The declaration was extended to all 78 municipalities two days later.

During Biden’s visit on Monday, Pierluisi publicly asked Biden to extend the declaration for 180 more days.

The president said he was “confident” his administration could meet the needs requested by Gov. Pierluisi. “We have to ensure, when the next hurricane hits Puerto Rico, we are ready,” Biden said.

Public officials have estimated that damages amount to around $3 billion but have warned that they could quickly exceed that figure as their assessments continue.

Puerto Ricans suffer large blackouts on a monthly basis due to an antiquated electrical grid in disrepair, even though the distribution, maintenance, and repair of the system has been managed by the U.S.-Canadian consortium LUMA Energy since last year. Puerto Rico is supposed to achieve 100 percent renewable energy by the year 2050, a prediction that many claim is naive at best.

Undoubtedly, Biden wanted to contrast his post-Fiona visit with former President Donald Trump’s visit after María. The image of Trump tossing paper towels at huddled hurricane victims and the exceedingly poor reconstruction effort that followed are etched in the minds of many Puerto Ricans.

While Trump’s cruelty clearly contrasts with Biden’s stated commitment, many are skeptical of when and where the promised funds will actually arrive, given the United States government has allocated more than $80 billion to rebuild after María, but only $24 billion has been disbursed in five years, according to the Puerto Rican government.

Many Puerto Ricans are also wary of FEMA given that it has allocated more than $13.2 billion to restore the electrical grid but only $40 million of that has been disbursed. The funds are reimbursement-based, meaning the Puerto Rico government —which just exited bankruptcy this year— has to pay for the projects and then apply for reimbursement.

On Monday, Biden said he was “raised in the Puerto Rican community at home politically”—a statement that confused many people watching.

Did Biden just say he was raised in a Puerto Rican community ? que?

While half of all Puerto Ricans speak English, nearly 75 percent do not speak English “very well,” according to U.S. census data from 2019.

Biden visited the Centro Sor Isolina Ferré Aguayo School after speaking at the ports, where he and First Lady Jill Biden handed out supplies to children in need.

Nearly 400 schools have been closed since 2017, in a bid to “consolidate” school districts by convicted former Education Secretary Julia Keleher. The Puerto Rico Department of Education’s “vision for the future” involves closing even more schools.

“God brought him [Biden] here and we are going to take advantage of it,” Ponce Mayor Luis Irrizarry Pabón told Latino Rebels before Biden arrived.

Irrizarry Pabón did not have an inkling as to why Biden chose to visit Ponce instead of other municipalities, though he did note that Ponce received the most rain out of any municipality, totaling 32 inches after all said and done.

Mayor Irrizary Pabón hired a translator so he could better communicate with Biden when they spoke.

He was part of a group of about 150 people who crammed into school buses and were waiting by the airport to catch a glimpse of Biden. The group had been cooking in the heat for hours waving U.S. flags and handmade posters before gathering near the police barricade when Biden arrived.

“It’s good that the president comes here to see the country’s destruction,” one attendant, who only wanted to be identified as Mr. Marcano, told Latino Rebels shortly before the group started gathering near the police barricade on the perimeter of the airport as Biden arrived. “We’ll try to say goodbye at least.”

A similar group accompanied by Sen. Gregogorio Matías (PNP-At-Large) gathered at the Ponce port to greet Biden before he spoke.

Outside of the places where Biden was scheduled to visit, most of Ponce was in gridlock traffic caused by a mixture of police blocking off multiple roads for the president’s motorcade and the fact that at least two dozen street lights remained without power. There was not much devastation left in the areas that Biden actually visited.

The president’s visit to the Centro Sor Isolina came with a posse of dozens of police officers, including state troopers shipped in from New Jersey for hurricane relief purposes last week. The riot line blocked residents from entering their homes, according to NotiUno 630.

The situation in the southwest of Puerto Rico remains much the same.

Hours before the commander-in-chief visited Puerto Rico, it was announced that the US Supreme Court will examine the Financial Oversight and Management Board for Puerto Rico (FOMBPR), an unelected fiscal control board appointed by former President Barack Obama in 2016 that has sovereign immunity from litigation.

Biden is the fourth sitting president to visit Ponce. The first, Theodore Roosevelt, visited in 1906 when the archipelago was then called “Porto Rico” before being changed back to Puerto Rico in 1931.

Before Biden, the last president to visit Ponce was Franklin Delano Roosevelt in 1934.