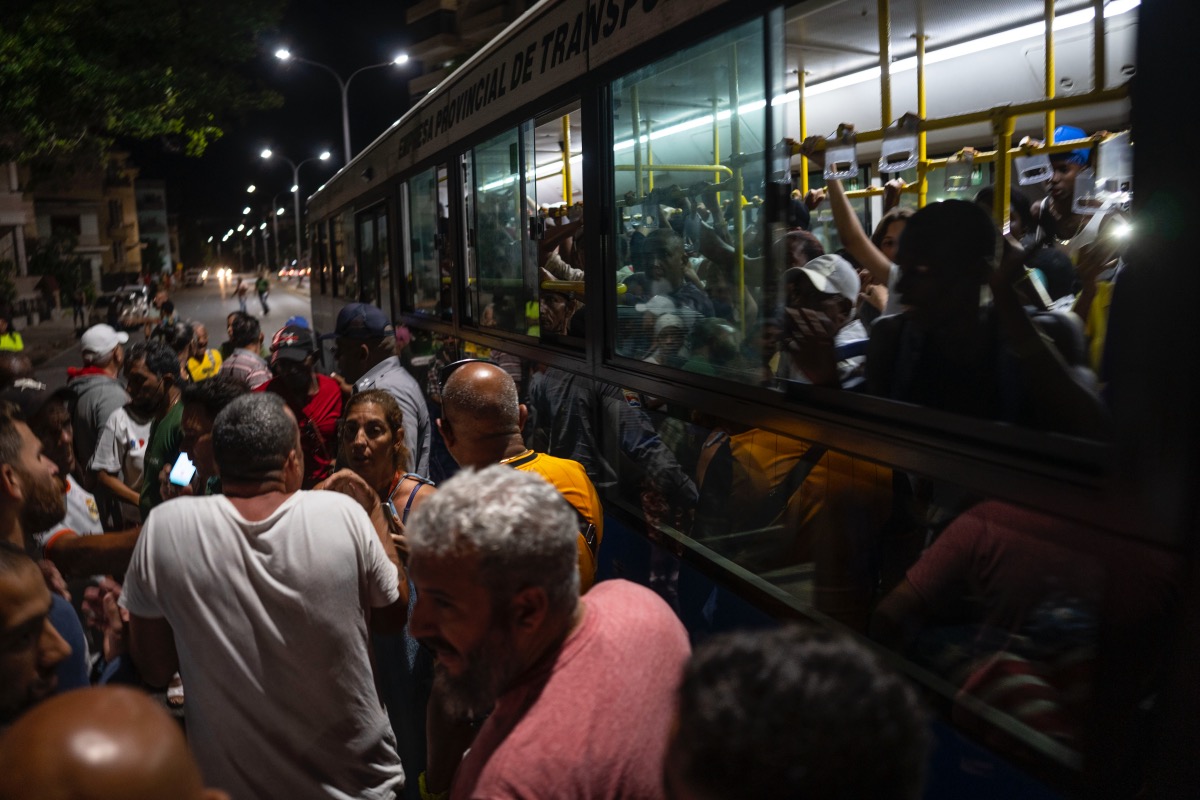 Demonstrators argue during a protest calling for the restoration of the electrical service after six days of blackouts due to the devastation of Hurricane Ian in Havana, Cuba, Saturday, October 1, 2022. (AP Photo/Ramon Espinosa)

HOUSTON, Texas — In a seemingly unprecedented move, the Cuban government has asked the United States for assistance with recovery efforts after Hurricane Ian struck the island on September 27, according to the Wall Street Journal. The Journal obtained emails between the two countries showing Cuba requesting aid, although no specific dollar amount was sought. According to the report, the U.S. was still trying to determine whether Cuba would supplement the request.

When Hurricane Ian struck Cuba, it knocked out the island’s power grid and left 11 million people without electricity. Cuba’s grid has been the source of contention for the island’s population for many years. Small protests over power outages in various communities across the island have become the norm. Since the hurricane, however, those protests have grown in size and have become more widespread.

For several days, videos have been posted online showing Cubans blocking roads as protests begin to metastasize out of frustration with the government. While it doesn’t seem to represent the counter-revolution so many Cuban Americans seek, it does speak to the level of anger with the regime that has filtered out onto the streets. The government’s efforts to enact reforms have been celebrated, yet for many, they are not moving fast enough.

Cubans are frustrated with inflation, lack of access to more reliable food sources and basic medicines like Tylenol, and seemingly nonstop power outages across the island. Typically, during outages, Cubans lose what little food they have to spoilage—further increasing frustrations and anger. In April, a source on the island who asked to remain anonymous due to fear of repression told Latino Rebels that frustrations were high.

“There have been power outages galore and a lot of interruptions to internet service,” the source said this past April. “I’m on a VPN so I’m able to connect. [This past April] in Cienfuegos, the power was out for 16 hours. It’s very, very tense here. This isn’t easy. But the people don’t want another revolution. They want reforms and gradual change.”

Similarly, protests happening now are focused on the continued service interruptions and the struggle for many to find enough food to last a month. In the midst of all this, inflation reached an all-time high not seen since the Soviet Era, with the exchange rate on the informal market reaching 200 Cuban pesos (CUP) per one U.S. dollar. The informal market is where many acquire U.S. dollars before migrating to the United States.

According to state-run media, progress continues in bringing the grid back online yet rolling blackouts lasting hours and sometimes days continue for many. It was reported this week that an estimated 300,000 Cubans remain without electricity.

A Department of State spokesperson confirmed to Latino Rebels that they’re in communication with the Cuban government and are continuing to evaluate the situation in Cuba.

“The U.S. continues to communicate with the Government of Cuba regarding the evolving humanitarian and environmental consequences of both Hurricane Ian and the August 5 fire in Mantanzas, and we are evaluating ways in which we can continue to support the Cuban people, consistent with U.S. laws and regulations,” the spokesperson said.

On Tuesday, the State Department published its guidelines on providing humanitarian assistance to Cuba.

“While the embargo remains in place, the U.S. government prioritizes support for the Cuban people, and U.S. law and regulations include exemptions and authorizations relating to exports of food, medicine, and other humanitarian goods to Cuba, as well as disaster response,” reads the statement published in late July of last year. “In cases where these require an export license, the U.S. government can expedite review of such license applications to facilitate the timely export of humanitarian goods, including medical supplies, to Cuba. Through the Departments of Commerce and the Treasury, there are many options available for expediting the export of humanitarian goods to Cuba.”

Since Hurricane Ian struck, Mexico, Venezuela, and Argentina have already begun to send aid and supplies to restore electricity and provide relief on the island.