EL FARO ENGLISH: Who Will Inherit Giammattei’s Power in Guatemala? 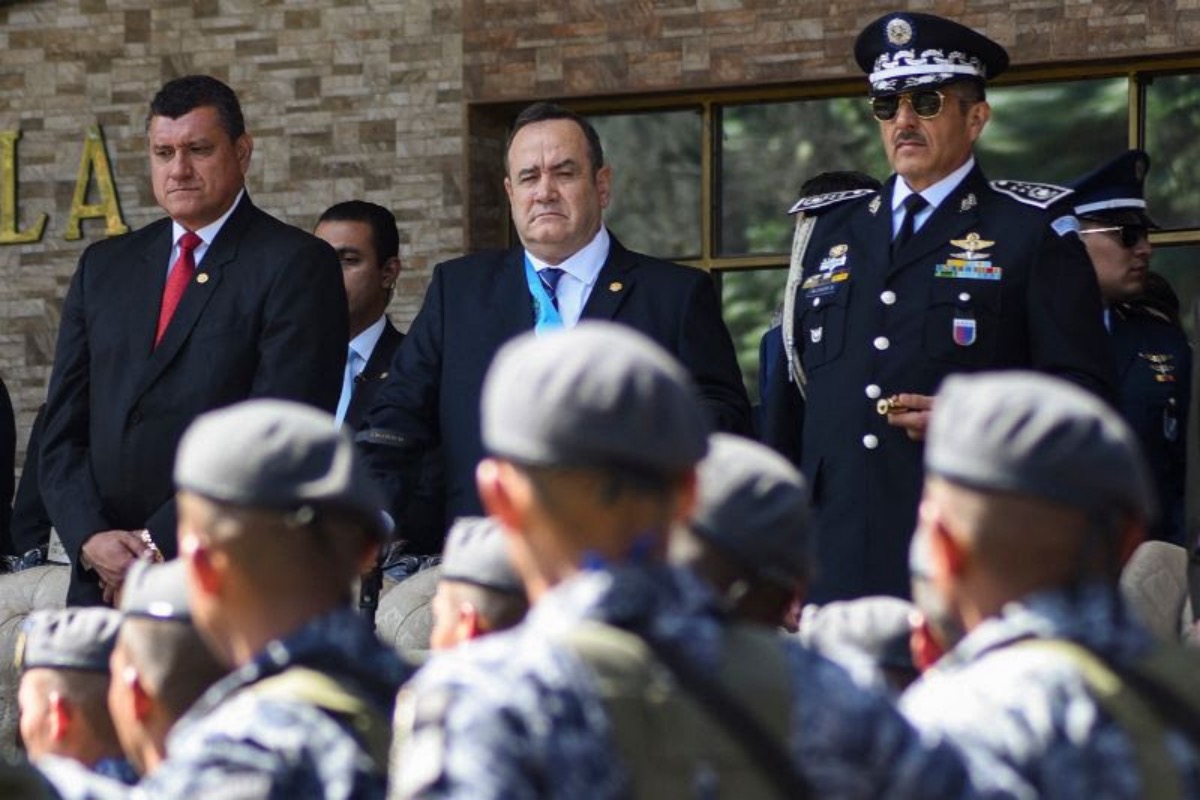 Guatemala, in Brief: Nine months before the presidential election, the country’s right-wing regime is fracturing into rivaling projects as progressive groups discuss the elusive idea of a united candidacy. Electoral authorities are indulging the pre-campaigning by the ruling party and top conservative Zury Ríos, but sanctioned left-wing Indigenous leader Thelma Cabrera for retweeting the words “plurinational state.”

Since the 1996 Peace Accords, no Guatemalan party has won consecutive presidencies. It’s just what President Alejandro Giammattei, secretary general of Vamos, hopes to accomplish in the elections set for June—even though he won’t be on the ballot.

Despite having an approval rating of under 20 percent, rivaled in the hemisphere only by Peru’s Pedro Castillo, the president has made a special effort to repeatedly appear at public events with congressman Manuel Conde, widely viewed as the anointed candidate.

Conde, 65, who came in 11th place in the 2007 presidential elections with the PAN party, aligned with Vamos in 2020 and has supported legislation appealing to the military and conservative Christians, like the bill proposed in September 2021 “against gender identity disorders.”

To bolster Conde’s candidacy, in recent months Giammattei, the man behind prison-or-exile lawfare against independent prosecutors who investigated his 2019 campaign on allegations of illicit finance, has unveiled a string of public works projects like a public hospital in Izabal and has increased 2023 funding to mayors’ offices.

Vamos is also expanding its ranks by absorbing ex-members of UCN, a party tarnished by drug trafficking ties and annulled in January. Construction firms tied to this party have received 312 million quetzales ($40 million) in contracts from the current administration.

“Giammattei is campaigning, and the TSE lacks the courage to apply the law,” Jorge Mario Valenzuela, TSE president from 2016 to 2017, told radio station ConCriterio, citing the use of partisan color palettes at government events and infrastructure projects.

Campaigning is prohibited before election season in January, but that hasn’t stopped Vamos from holding rallies—like one in July, where Giammattei’s closest confidant, Miguel Martínez, poised to run for Congress, sang the Tigres del Norte anthem, “Jefe de Jefes.”

Giammattei’s main adversary comes from the same right wing. Polling in the past three months suggests that the most popular politician in Guatemala is Zury Ríos, a four-term legislator from 1996 to 2012 and daughter of General Efraín Ríos Montt, the former dictator convicted in 2013 of genocide in the early 1980s against the Maya Ixil people.

Ríos stayed at her father’s side in court. In an interview with El Faro a month before the conviction, she justified military “excesses” by arguing that Guatemala “would have become Managua, La Habana, or Venezuela,” and denied the charges for image reasons: “We would be unable for generations to shake the stigma of being considered a genocidal country.”

While Ríos’ party, Valor, has voted with Giammattei in Congress, her tone is changing as the electoral season approaches.

“The crisis of the pandemic revealed the problems of our public health and education systems, and of course corruption has robbed the public of schools, housing, and medicine,” she said in a video posted to Twitter on September 11. In a previous post in July, she nodded to Salvadoran President Nayib Bukele’s state of exception, calling it a “model of reference.” Election authorities have said nothing of these apparent campaign ads. 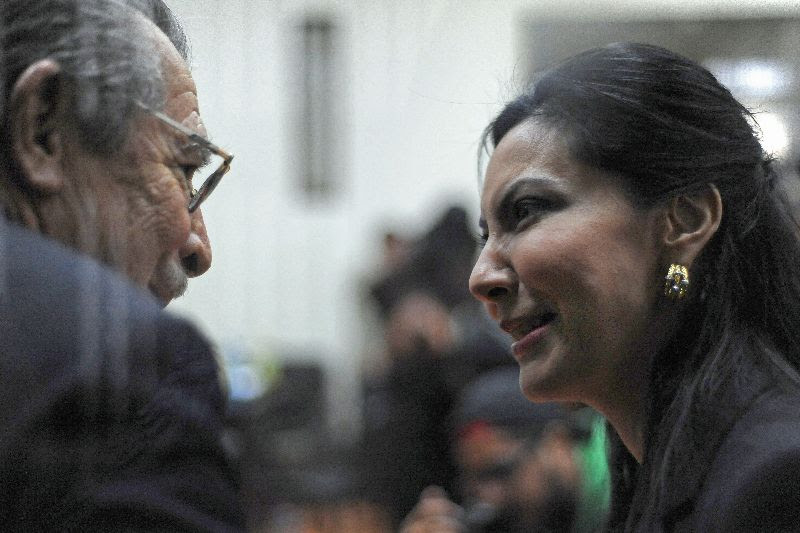 Zury Ríos in 2013 during the trial of her father, Efraín Ríos Montt, on genocide charges. (Johan Ordónez/AFP)

In 2015 and 2019, the Supreme Electoral Tribunal expelled her from the race, citing a prohibition of the office for the offspring of coup presidents. This May, the Inter-American Commission on Human Rights issued a settlement agreement between Ríos and the Guatemalan state, arguing that the prohibition violated her rights, setting the stage for a legal showdown next year.

Other Vamos-aligned politicians have begun to position themselves, like congresswoman and perennial presidential hopeful Sandra Torres, from UNE, which claims to be left-of-center and holds 33 of 160 seats in Congress, the most of any party. Torres, who had her 2019 bid dashed largely by lack of support in the capital, would face added hurdles given that UNE is split into two factions and is fighting cancellation for illicit campaign finance.

Also purportedly in the mix is Roberto Arzú, the son of arch-conservative Álvaro Arzú, who was president from 1996 to 1999 and later mayor of Guatemala City for 14 years. Having the most dynastic family name in Guatemala wasn’t enough to propel Roberto past fifth place in the 2019 presidential race.

The Supreme Electoral Tribunal hasn’t said anything about Giammattei and Ríos courting the public ahead of campaign season, but it did issue a warning in August to Maya Mam politician Thelma Cabrera, who came in fourth place in the 2019 presidential race with the left-wing People’s Liberation Movement (MLP).

In their notification, electoral authorities pointed to a hashtag on one of the cited posts, which read “#EstadoPlurinacionalGt”—a call for the creation of a “plurinational state.”

Whom the Supreme Electoral Tribunal chooses to sanction, or even allow to run, is a major question facing the electoral season. Only after officials banned the candidacies of his two leading rivals, Ríos and now-exiled former Attorney General Thelma Aldana, did Giammattei take the presidency in 2019. 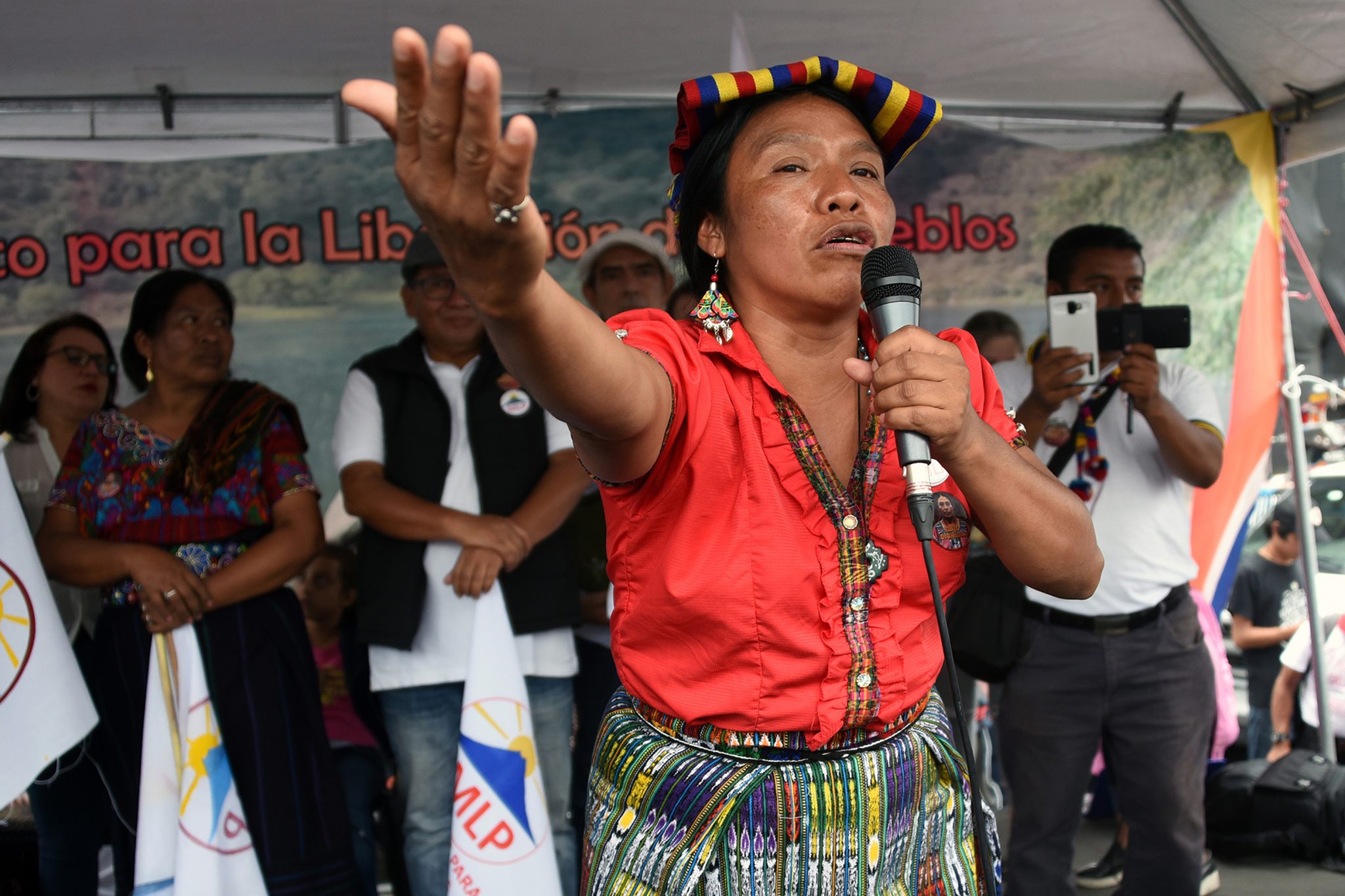 Thelma Cabrera at a campaign rally in Guatemala City on June 8, 2019 (Johan Ordóñez/AFP)

In a country dominated by parties close to religious conservatives and the military, it’s also unclear whether groups of other political stripes who have joined protests against Giammattei —leftists, progressive university students, Indigenous authorities, anti-corruption activists— can negotiate a big-tent opposition front and settle on a candidate who can survive to the August run-off.

“There’s a wide range of progressive parties and movements. They have to recognize that they failed before because they were divided,” said former human rights ombudsman Jordán Rodas, who fled the country in August but says he plans to return for a presidential or congressional run in 2023, in a September 22 interview with El Faro.

Three opposition parties —Semilla, Winaq, and the former guerilla party UNRG— have agreed to propose joint mayoral candidates, but not yet for the presidential race.

“It’s difficult for there to be an electoral alliance on the Left because the main group, the MLP, will not ally itself with anyone,” asserted political analyst Gustavo Berganza to El Faro English. “They are following their own project. Their candidate is already traveling the country and has name recognition,” he added, alluding to Cabrera.

In recent months the MLP, rejected the offer from Semilla, Winaq, and the UNGR for a municipal alliance, proclaiming itself “radical and anti-system.”

In the last year, electoral alliances —or the lack thereof— have made or broken elections in Central America. Last November, the Nicaraguan opposition factions failed to propose a single candidate against President Daniel Ortega, partly over differences on religious matters and sexual and gender diversity.

That same month, in Honduras, it was an uncomfortable electoral alliance between Xiomara Castro and Salvador Nasralla, leader of a party he named after himself, Salvador de Honduras (“Savior of Honduras”), that delivered her the presidency.

Now, in Guatemala and El Salvador, opposition groups have begun mulling over a united 2024 front against authoritarianism and corruption, despite having never been more corralled and weakened than they are now.

Thanks for being part of our community. Send us your feedback on our work at english@elfaro.net and, if you appreciate this newsletter, please share.

6 responses to “EL FARO ENGLISH: Who Will Inherit Giammattei’s Power in Guatemala?”