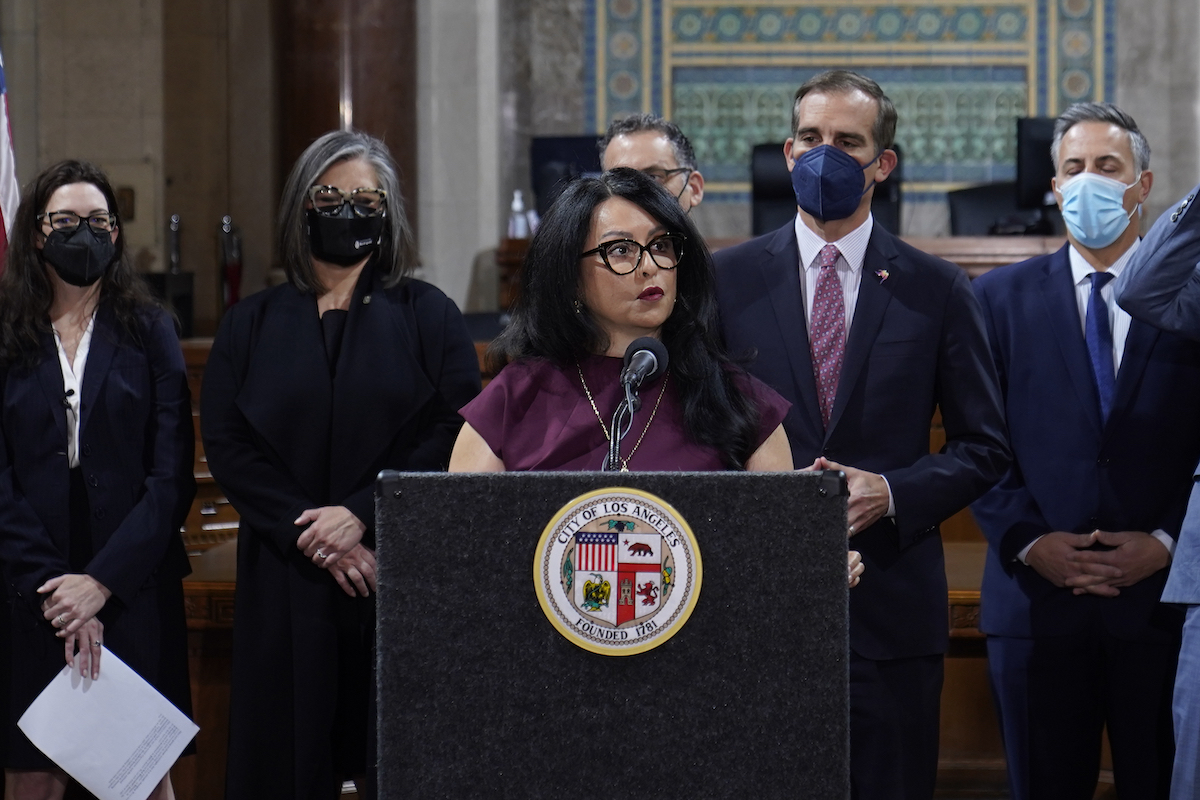 LOS ANGELES (AP) — The president of the Los Angeles City Council resigned from the post Monday after she was heard making racist comments and other coarse remarks in a leaked recording of a conversation with other Latino leaders.

“In the end, it is not my apologies that matter most; it will be the actions I take from this day forward. I hope that you will give me the opportunity to make amends,” she said in a statement. “Therefore, effective immediately I am resigning as President of the Los Angeles City Council.”

The statement did not say she would resign her council seat. There was no immediate response to a call and email sent to her spokesperson.

Martinez said in the recorded conversation that white Councilmember Mike Bonin handled his young Black son as if he were an “accessory” and described the son as behaving like a “changuito,” or “like a monkey,” the Los Angeles Times reported Sunday.

Martinez also referred to Bonin as a “little bitch” and at another point mocked Oaxacans, the Times said.

“I see a lot of little short dark people,” Martinez said in reference to a particular area of the largely Hispanic Koreatown neighborhood.

“I was like, I don’t know where these people are from, I don’t know what village they came [from], how they got here,” Martinez said, adding “Tan feos” — “They’re ugly.”

The recording’s content rocked the political establishment just weeks before elections for the mayor’s office and several council seats.

Bonin and his husband, Sean Arian, had issued a statement calling for the resignations of Martinez and two other council members who were involved.

“The entirety of the recorded conversation… displayed a repeated and vulgar anti-Black sentiment, and a coordinated effort to weaken Black political representation in Los Angeles,” they said.

The conversation was recorded in October 2021, and others present were Councilmembers Gil Cedillo and Kevin de León and Los Angeles County Federation of Labor President Ron Herrera, the Times reported. The overall discussion was about frustrations with redistricting maps produced by a city commission.

The Times reported that the approximately hourlong audio was posted on Reddit by a now-suspended user, and that it was unclear who recorded the audio and whether anyone else was present at the meeting.

“In a moment of intense frustration and anger, I let the situation get the best of me and I hold myself accountable for these comments. For that I am sorry,” she said.

“The context of this conversation was concern over the redistricting process and concern about the potential negative impact it might have on communities of color,” she said. “My work speaks for itself. I’ve worked hard to lead this city through its most difficult time.”

Martinez, whose district website describes her as “a glass-ceiling shattering leader who brings profound life experience as the proud daughter of working-class immigrants,” was elected to the council in 2013 and became the council’s first Latina president in 2020.

De León, a former state legislator, referred at one point in the conversation to Bonin as the council’s “fourth Black member.”

“Mike Bonin won’t f—-ing ever say peep about Latinos. He’ll never say a f—-ing word about us,” he said.

During the part in which Martinez likened Bonin’s son to an “accessory,” De León appeared to compare Bonin’s handling of the child to “when Nury brings her Goyard bag or the Louis Vuitton bag.”

De León said in a statement that the comments were inappropriate.

“I regret appearing to condone and even contribute to certain insensitive comments made about a colleague and his family in private,” he said. “I’ve reached out to that colleague personally.”

“While I did not engage in the conversation in question, I was present at times during this meeting last year,” he said. “It is my instinct to hold others accountable when they use derogatory or racially divisive language. Clearly, I should have intervened.”

Herrera, the labor official, said in an apology that there is “no excuse for the vile remarks made in that room,” and that he ”didn’t step up to stop them,” the Times reported.

In their statement, Bonin and his husband said Martinez was unfit for public office.

“No child should ever be subjected to such racist, mean and dehumanizing comments, especially from a public official. It is painful to know he will someday read these comments,” they said.

Three Black members of the council issued a joint statement saying it was “a very dark day in LA politics for African-Americans, the LGBTQ+ community, Indigenous people and Angelenos who have put their faith in their local government.”

Councilmembers Curren Price, Heather Hutt and Marqueece Harris-Dawson said that a “facade” had come crashing down.

“This is 2022 and we will not turn a blind eye to the blatant prejudice, discrimination and racism that has been put on full display for the whole world to see,” they said.

Martinez had endorsed U.S. Rep. Karen Bass, who is seeking to become the first Black woman to lead the nation’s second-most populous city.

“Let me be clear about what was on those tapes: appalling, anti-Black racism,” Bass said in a statement.

“All those in the room must be held accountable, and I’ve spent the day speaking with Black and Latino leaders about how to ensure this doesn’t divide our city,” Bass added.

Her opponent, billionaire developer Rick Caruso, said it was a “heartbreaking day for our proud, diverse city,” and he called for all three involved to resign from the council.

“Now, we must unite and strongly repudiate what was said,” Caruso said in a statement.