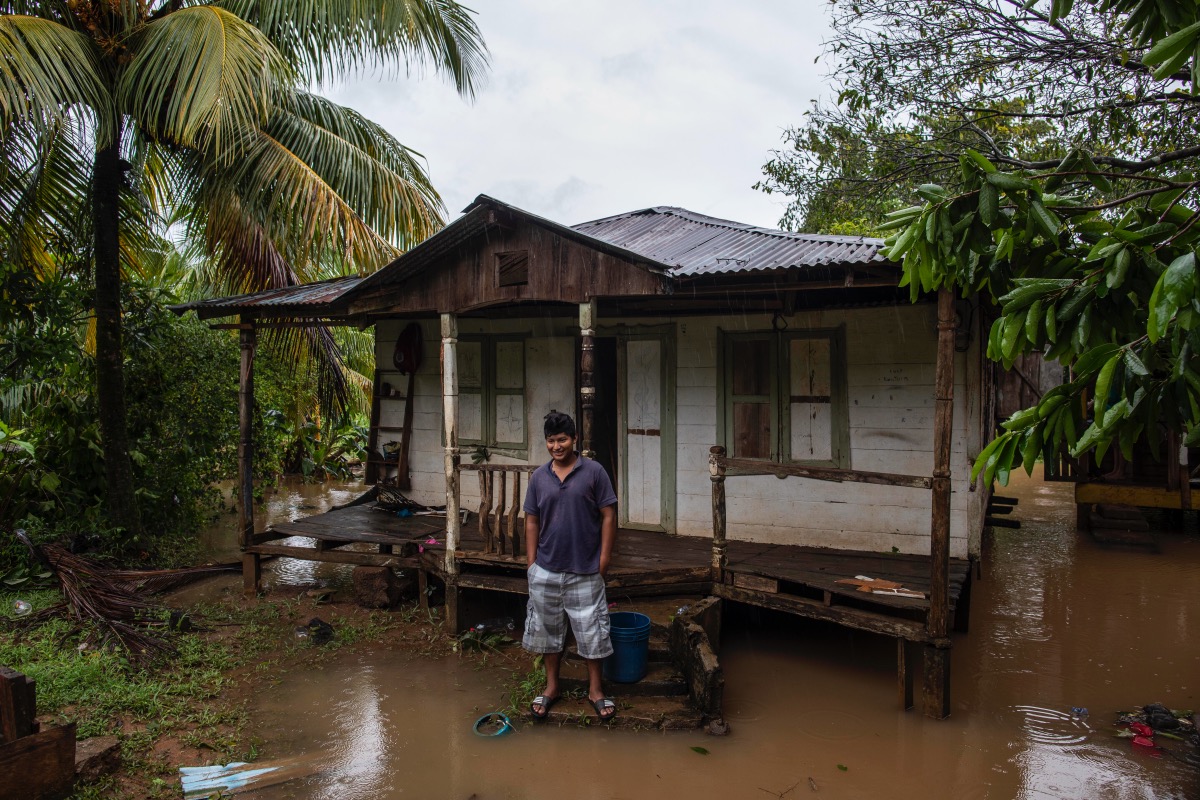 A man stands outside his house surrounded by floodwaters after Hurricane Julia swept through the area in Bluefields, Nicaragua, Sunday, October 9, 2022. Hurricane Julia hit Nicaragua’s central Caribbean coast and dumped torrential rains across Central America before reemerging over the Pacific as a tropical storm. (AP Photo/Inti Ocon)

GUATEMALA CITY (AP) — Former Hurricane Julia has dissipated but was still drenching Guatemala and El Salvador with torrential rains Monday after it reemerged in the Pacific following a pounding of Nicaragua.

At least 28 people were reported dead as a direct or indirect result of the storm.

Guatemala’s disaster prevention agency said five people died after a hillside collapsed on their house in Alta Verapaz province, burying them. And in Huehuetenango province, near Mexico, nine people died, including a soldier killed while performing rescue work.

Authorities in El Salvador said five Salvadoran army soldiers died after a wall collapsed at a house where they sought refuge in the town of Comasagua, where hundreds of police and soldiers have been conducting anti-gang raids. Another soldier was injured.

Two other people died in the eastern El Salvador town of Guatajiagua after heavy rains caused a wall of their home to collapse. Another man in El Salvador died when he was swept away by a current, and another died when a tree fell on him.

Rivers overflowed their banks and El Salvador declared a state of emergency and opened 80 storm shelters.

In neighboring Honduras, a 22-year-old woman died when she was swept away by currents, and three people died when their boat swamped or capsized in northern Honduras. A man in Nicaragua was killed by a falling tree.

Julia hit Nicaragua’s central Caribbean coast early Sunday as a hurricane with maximum sustained winds of 85 mph and survived the passage over the country’s mountainous terrain, entering the Pacific late in the day as a tropical storm.

By Monday, Julia had moved inland over Guatemala and its winds were down to 30 mph.

The center said floods and mudslides were possible across Central America and southern Mexico through Tuesday, with the storm expected to bring as much as 15 inches of rain in isolated areas.

In Guatemala, two people were listed as missing, two were hospitalized, and about 1,300 people had to leave their homes because of flooding and rising streams.

Julia was expected to dissipate later Monday as it passes along the Guatemalan coast.

Colombia’s national disaster agency reported Sunday that Julia blew the roofs off several houses and knocked over trees as it blasted past San Andres Island east of Nicaragua. There were no immediate reports of fatalities

In Nicaragua, Vice President Rosario Murillo told TN8 television that 9,500 people had been evacuated to shelters.

Heavy rains and evacuations were also reported in Panama, Honduras, and Costa Rica, where some highways were closed due to the downpours.