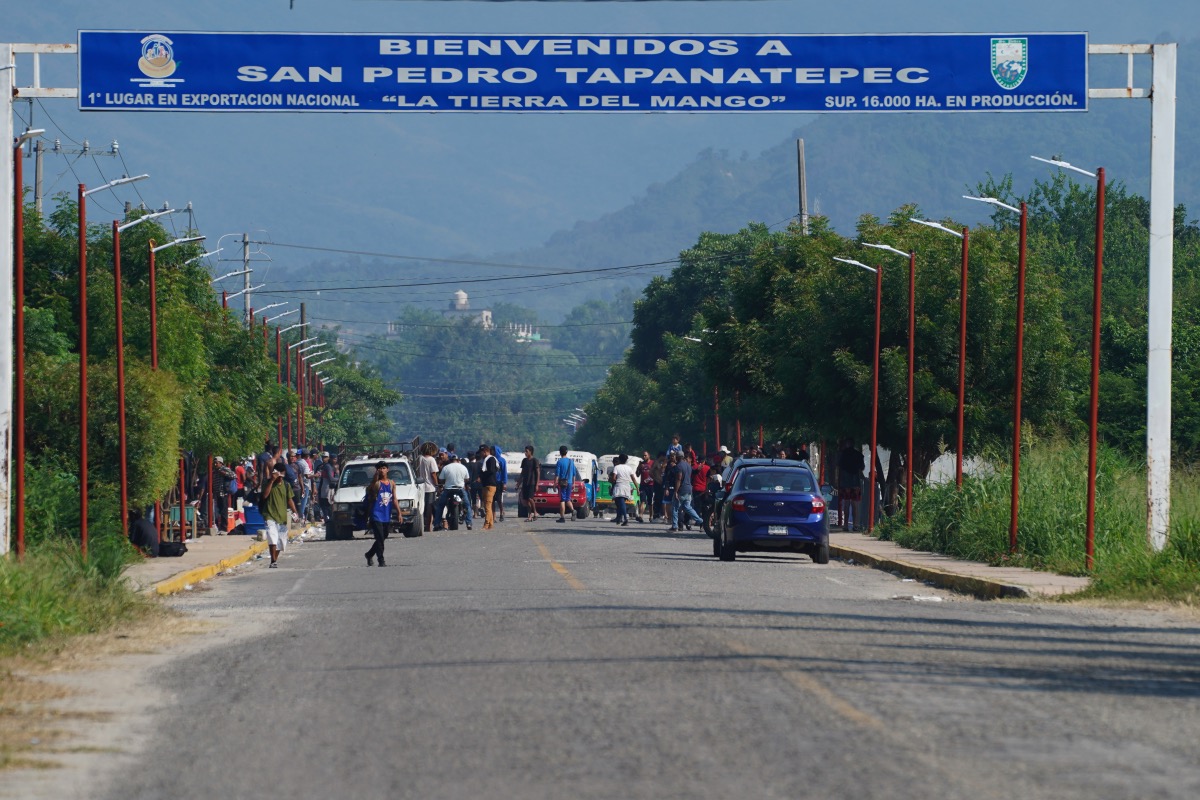 Migrants, mostly from Venezuela, arrive at a camp where Mexican authorities will arrange permits for their continued travel north, in San Pedro Tapanatepec, Oaxaca, Mexico Wednesday, October 5, 2022. As migrants, especially Venezuelans, struggle to come to terms with a new U.S. policy discouraging border crossings, the town of San Pedro Tapanatepec is unexpectedly playing host to over 10,000 migrants camped far from the U.S. border. (AP Photo/Marco Ugarte)

MEXICO CITY (AP) — As migrants, especially Venezuelans, struggle to come to terms with a new U.S. policy discouraging border crossings, one small town in southern Mexico is unexpectedly playing host to thousands of migrants camped far from the U.S. border.

San Pedro Tapanatepec had 7,000 migrants, about 75 percent Venezuelans, when the Associated Press visited at the beginning of October. By Monday, Mayor Humberto Parrazales estimated the number had grown to 14,000. The AP could not independently verify that figure.

While many Venezuelans had planned to make their way to the U.S. border, the new U.S. policy says only those applying online and arriving by air will be admitted. Border crossers will simply be expelled.

That leaves many camped out in five large tent shelters wondering what they’ll do next. They while away the daytime heat with just a few electric fans to keep the temperature down.

San Pedro Tapanatepec is obviously not where they wanted to wind up. The heat-drenched town in Oaxaca is only about 180 miles from the border with Guatemala. Many of the migrants had thought they forever left Guatemala behind on the long trek that took many of them from the Darién Gap in Panama through Central America to Mexico.

Since August, the town has served as a way station where migrants would wait for a few days while Mexican immigration authorities issued them a sort of transit pass that gave them time to make it to the U.S. border.

But Parrazales said the flow of that paperwork has slowed down, leaving many more migrants waiting here in an impoverished town ill-equipped to play host to so many people.

“I don’t understand anything,” Venezuelan migrant Robinson Rodríguez said by phone from Tapanatepec. “If everything at the border is closed, then they shouldn’t be handing out these (transit) passes. And if you ask (the authorities), they say they don’t know, but they keep handing them out.”

Time is not on the migrants’ side. Rodríguez had actually received a seven-day transit document, which basically required him to leave Mexico within a week. But he had to spend time raising the money to pay for transport to the northern border, and by the time he got it, his pass had expired.

Confusion reigns. Nicaraguan migrant Luis Martinica showed a leaflet containing a web link for Venezuelans to apply, but it was confusing. If he, as a Nicaraguan, showed up at the U.S. border, would he too be expelled?

Mayor Parrazales has his own set of worries. The town’s transformers can no longer handle the electricity needed for the camp, and there have been partial blackouts. Health care, sanitation, and water are also a problem.

Still, migrants have to pay for most things, and Parrazales acknowledges the town has seen about $15 million in extra business selling migrants food, places to sleep, medicine, and taxi and bus rides. “They have to pay to charge cell phones,” he notes.

Mexico has issued about 77,000 transit passes to Venezuelans so far this year, most of them in the last three months. Like Nicaraguans and Cubans, Venezuelans are hard to deport, both for Mexico and the United States.

Mexico’s National Immigration Institute did not respond to requests by the AP about how the camp will be managed after the new U.S. program. In the face of the lack of official information, rumors and tensions run high.

Martinica, the Nicaraguan immigrant, says officials stopped issuing passes for a while “after a dispute in which some Venezuelans offended a police officer.”

“There is a big lack of information,” Parrazales said. “This is a pressure cooker I’m trying to contain here.”