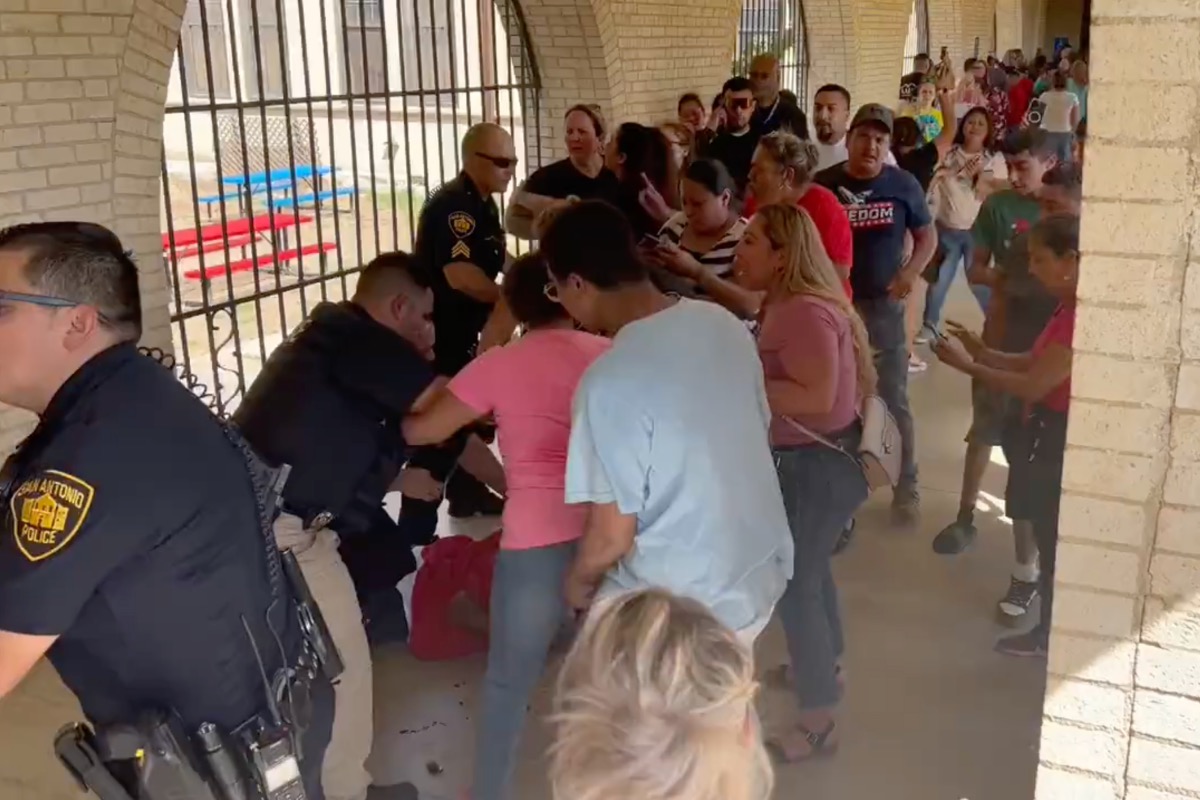 Parents clash with police officers outside Jefferson High School in San Antonio after reports of an active shooter on Tuesday, September 20, 2022. (Matt Roy/WOAI/KABB)

HOUSTON — When reports of a shooting at Jefferson High School in San Antonio sent the school into lockdown on September 20, fearful parents attempting to enter the school clashed with police officers outside, videos posted online show.

In one video, police can be seen throwing a man to the ground.

Parents are currently nearly rushing the school. They want their kids out of there ASAP and police are having a tough time containing.

Uvalde weighing in everyone mind pic.twitter.com/eOpPnzcgzZ

According to the San Antonio Express-News, the man allegedly tried to break a window. He was seen bloodied as he was being detained, and reports indicate that the man was not charged but was transported to the hospital for his injuries.

While police say he used a knife, witnesses on the scene claim he was armed only with his fist.

As parents approached the school, the scene was all too reminiscent of Uvalde, with police officers seemingly standing around while the school was searched. Many parents in the crowd complained about a lack of communication and information, as well as a lack of action, expressing fears that a shooter was on the move inside the school.

Parent punches and breaks window, cuts his wrist or hand before brawl breaks out on campus of Jefferson high. Madness ensues.

Kids have now been released pic.twitter.com/HtGA5JajrE

Another man was seen being handcuffed, though no charges have been filed against any parents that rushed to the school.

In the end, the report of an active shooter was a false alarm.

Many will argue that parents racing to the scene is detrimental to the work first responders need to do. But after witnessing so many school shootings every year and police regularly seeming to cower in fear, it’s no secret why these parents did what they did, and it should come as no surprise to see more parents react similarly in the future.

The lack of action by police on May 24 at Robb Elementary in Uvalde, Texas wasn’t an isolated incident. Many times in the past, police have failed to act by running away or hiding from a terrorist as they methodically killed students and teachers.

There is a lot to unpack after the chaos that ensued in San Antonio. It’s incumbent on individual communities to adopt solutions to prevent mass shootings in schools. Police cannot prevent shootings, especially when they themselves are gripped with fear.

Parents can’t stop a shooter either by rushing a school. They simply become targets and possible casualties.

More of the Brawl.

Trust in the police has seemingly been on a steady decline. After the murder of George Floyd and the shooting at Robb Elementary in Uvalde —among so many other incidents— the erosion of confidence in law enforcement lies solely at the feet of those who train police, propagandize police, and how individual officers interact with citizens.

In essence, today’s police culture is one of self-preservation, not public safety.

The lies perpetuated by cops to save themselves have become all too common. It happens every day. Much of the U.S. public often takes the police at their word when departments have proven time and again that they should not be trusted. Beating after beating, murder after murder, it’s always about covering each other’s asses.

The culture in U.S. law enforcement is out of control, and parents’ lack of faith in police officers is justified—especially if they’re Black or Latino. Until the “good cops” take action against the bad ones, Black people and Latinos have good reason to be afraid of police in general.

And it seems a whole lot of cops, whether in cities or rural America, would have it no other way.

One response to “Parents vs. Police (OPINION)”