UN Set to Vote on Sanctions Against Haitian Gang Leader 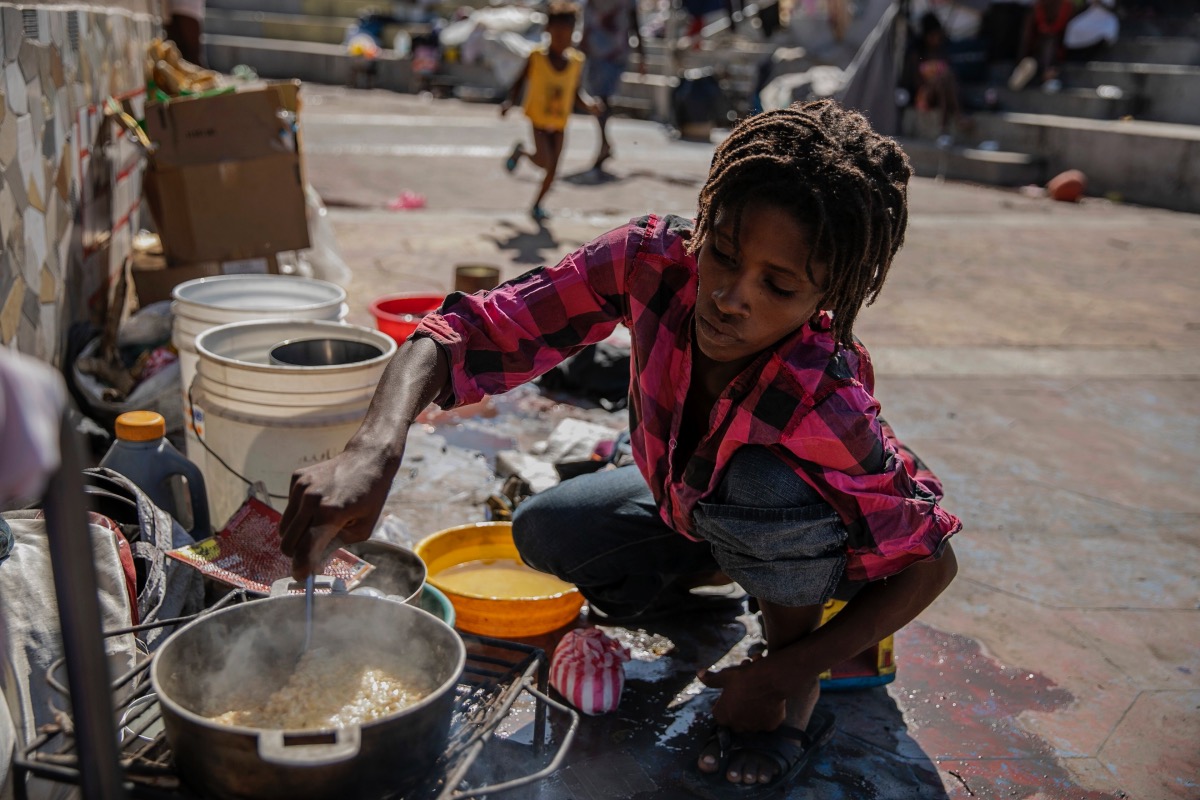 A woman stirs a pot of food at the Hugo Chavez public square transformed into a refuge for families forced to leave their homes due to clashes between armed gangs in Port-au-Prince, Haiti, Thursday, October 20, 2022. (AP Photo/Odelyn Joseph)

UNITED NATIONS (AP) — The U.N. Security Council planned to vote Friday on a resolution that would demand an immediate end to violence and criminal activity in Haiti and impose sanctions on a powerful gang leader.

The United States and Mexico, which drafted the 10-page resolution, delayed the vote from Wednesday so they could revise the text in hopes of gaining more support from the 15 council members.

The final text, obtained by the Associated Press on Thursday, eliminated a reference to an October 7 appeal by Haiti’s Council of Ministers for the urgent dispatch of an international military force to tackle the country’s violence and alleviate its humanitarian crisis.

A second resolution, which was still being worked on late Thursday, would address the issue of combating Haiti’s violence. It would authorize an international force to help improve security in the country if approved.

U.S. Ambassador Linda Thomas-Greenfields said Monday that the “non-U.N.” mission would be limited in time and scope and would be led by an unspecified “partner country” with a mandate to use military force if necessary.

The sanctions resolution being put to a vote Friday named only a single Haitian —Jimmy “Barbecue” Chérizier, whose gang has blocked a key fuel terminal leading to severe shortages. Chérizier, a former police officer who leads an alliance of gangs known as the G9 Family and Allies, would be hit with a travel ban, asset freeze, and arms embargo if the resolution passes.

The resolution, however, would also establish a Security Council committee to impose sanctions on other Haitian individuals and groups whose actions threaten the peace, security, or stability of the Western Hemisphere’s poorest nation. Targeted actions would include criminal activity, violence and arms trafficking, human rights abuses, and obstruction of aid deliveries.

Political instability has simmered in Haiti since last year’s still-unsolved assassination of President Jovenel Moïse, who had faced opposition protests calling for his resignation over corruption charges and claims that his five-year term had expired. Moïse dissolved Parliament in January 2020 after legislators failed to hold elections in 2019 amid political gridlock.

Haiti already was gripped by inflation, causing rising prices that put food and fuel out of reach for many, and protests have brought society to the breaking point. Violence is raging, making parents afraid to send their kids to school. Hospitals, banks and grocery stores are struggling to stay open. Clean water is scarce and the country is trying to deal with a cholera outbreak.

“Chérizier and his G9 gang confederation are actively blocking the free movement of fuel from the Varreux fuel terminal—the largest in Haiti,” the draft resolution said. “His actions have directly contributed to the economic paralysis and humanitarian crisis in Haiti.”

It added that Chérizier “has engaged in acts that threaten the peace, security, and stability of Haiti and has planned, directed, or committed acts that constitute serious human rights abuses.”

While serving in the police, it said, Chérizier planned and participated in a November 2018 attack by an armed gang on the capital’s La Saline neighborhood that killed at least 71 people, destroyed over 400 houses, and led to the rapes of at least seven women.

He also led armed groups “in coordinated, brutal attacks in Port-au-Prince neighborhoods throughout 2018 and 2019” and in a five-day attack in multiple neighborhoods in the capital in 2020 in which civilians were killed and houses set on fire, the resolution said.

In a video posted on Facebook last week, Chérizier called on the government to grant him and G9 members amnesty. He said in Creole that Haiti’s economic and social situation was worsening by the day, so “there is no better time than today to dismantle the system.”

He outlined a transitional plan for restoring order in Haiti. It would include the creation of a “Council of Sages,” with one representative from each of Haiti’s 10 departments, to govern with an interim president until a presidential election could be held in February 2024. It also calls for restructuring Haiti’s National Police and strengthening the army.

The draft resolution expresses “grave concern about the extremely high levels of gang violence and other criminal activities, including kidnappings, trafficking in persons and the smuggling of migrants, and homicides, and sexual and gender-based violence including rape and sexual slavery, as well as ongoing impunity for perpetrators, corruption and recruitment of children by gangs and the implications of Haiti’s situation for the region.”

It demands “an immediate cessation of violence, criminal activities, and human rights abuses which undermine the peace, stability and security of Haiti and the region.” And it urges “all political actors” to engage in negotiations to overcome the crisis and allow legislative and presidential elections to be held “as soon as the local security situation permits.”