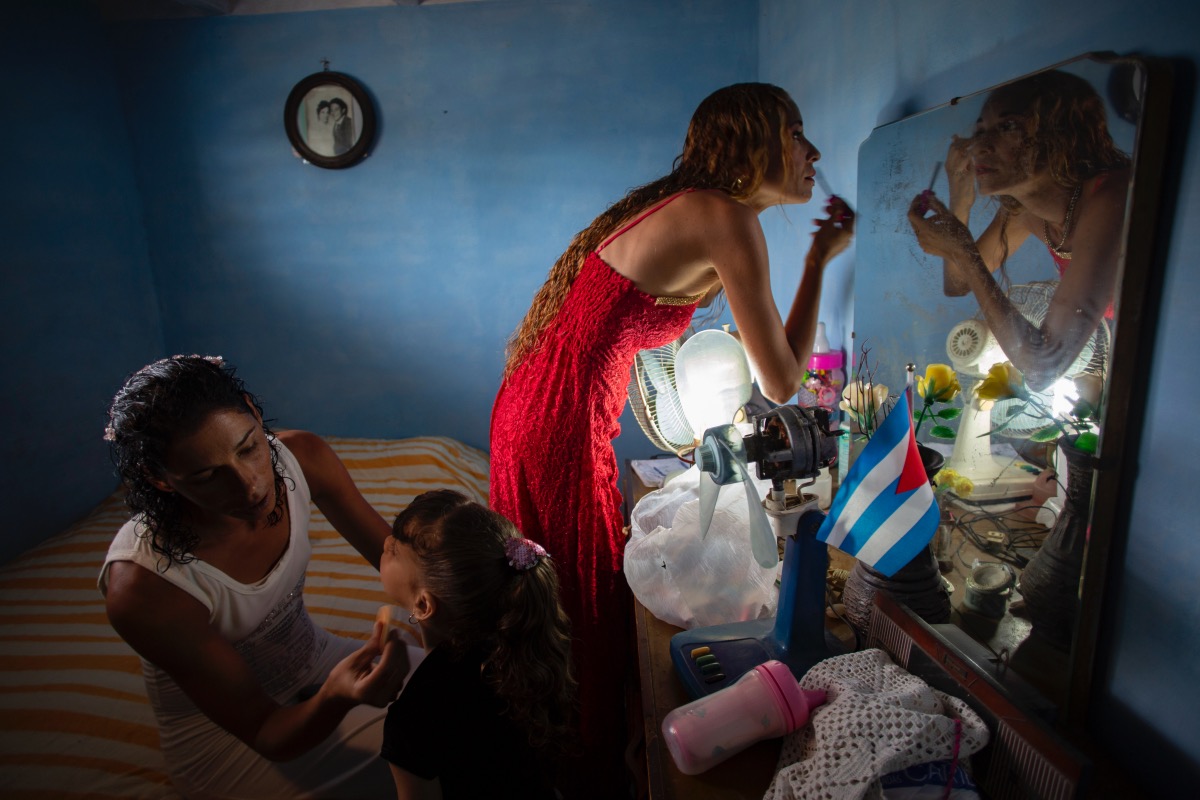 Liusba Grajales, left, puts makeup on her daughter Ainhoa as her partner Lisset Diaz Vallejo gets ready as they prepare to get married in Santa Clara, Cuba, Friday, October 21, 2022. The couple, which has been together for seven years, is one of the first to make the decision to get legally married in Cuba following the new Family Code, which opened up everything from equal marriage to surrogate mothers. (AP Photo/Ismael Francisco)

SANTA CLARA, Cuba (AP) — Serious, standing upright and dressed in long gala dresses —despite the midday Cuban heat— Lisset and Liusba quietly walk up the 10 steps of the notary office, their hands clenched and shaking.

Less than a few feet ahead walk their two young daughters.

Nearly an hour later, when they walked out of the doors, the tension on their faces was replaced by smiles. From that moment, they were wives.

It became a possibility just three weeks before on the island when Cuba’s new Family Code —opening up everything from equal marriage to surrogate mothers— came into effect.

The couple, which has been together for seven years, is one of the first to make the decision to get legally married in Cuba following the code.

“It’s a big day,” said Liusba Grajales, a manager at the central University of Las Villas, just 250 kilometers from the capital. “Love is love, just the way it is. Without imposition, without prejudice… I don’t know whether I should laugh or cry. It’s a mix of so many strong emotions.”

The code was approved after heavy campaigning by the Cuban government, and support by the most vocal advocate for gay rights on the island, Mariela Castro, the daughter of former president Raul Castro.

It made Cuba the ninth country in Latin America —following Chile, Costa Rica, Ecuador, and Colombia— to legalize gay marriage in recent years.

Cuban elections routinely produce victory margins of more than 90 percent, as did a referendum on a major constitutional reform in 2019.

Despite that, a third of the country, 33.15 percent, voted “no.” The text faced a large campaign against it from evangelical groups that reject gay marriage.

The code also was rejected by some groups opposed to the government, which called for a “no” vote as a way of rejecting Cuban authorities amid rising discontent with the government of Miguel Díaz-Canel Bermúdez.

It was also opposed by some members of the LGBTQ community, which said they were abstaining to vote on something they considered to be a human right in the first place.

“Many people in the community were against voting ‘yes’ because they don’t believe that they need some paper to tell them they have this on paper (to be recognized as a couple). I think we do need the right, that it protects us,” said Liusba.

But she said she believes the island is still “a decade away” from becoming a “better and more inclusive” society.

The old Family Code, dating back to 1975, established that marriage was between a man and a woman —not between two people— which excluded lifelong partners from things such as inheriting the belongings of the other when one died.

Together, Lisset and Liusba live with their two daughters, 11-year-old Laura and three-year-old Ainhoa. The latter was born by insemination at home because at the time they had no access to assisted fertility treatments because they didn’t have male partners.

The new law goes further than equal marriage —which activists tried to include in the Constitution in 2019 without success— or the ability for gay couples to adopt or use surrogates.

The law regulates for the first time the visitation rights of grandparents over grandchildren and communication with step-parents in situations of divorces, and even the custody of minors in the latter when it’s necessary for the child’s welfare.

It also allows for separate property regimens for married couples, authorizes parents to choose the order of their children’s surnames, and extends protections for the disabled and elderly, among other rights.

The two women considered marriage a way to also protect their children if something were to ever happen to them.

Ainhoa, also dressed in her best dress for the occasion, didn’t quite understand her mother’s marriage ceremony, but walked around introducing Laura. “She is my sister,” she repeated.

“I’m happy for what the wedding means,” Laura told the Associated Press very circumspectly, wiping tears away alongside her mothers.

But it came despite strong opposition from evangelical churches, which alleged the law was against the “traditional family” established by God, which they claim is the union of a man and a woman meant to procreate. In some rural areas, the code appeared to receive less support.

While the country’s capital of Havana gave 70 percent approval, and Villa Clara —home of Liusba and Lisset— gave 66 percent, in southeastern Holguin the measure got 53 percent.

The pushback “indicates that we have to keep working in those areas and deepen and direct educational work,” said Francisco “Paquito” Rodríguez, a blogger and one of the first Cuban activists for the rights of the LGBTQ community.

He still called the new code a victory.

Cuban authorities did not disclose how many gay couples were married in these three weeks, although Rodríguez thinks it could be at least a dozen based on the information he’s gotten from social media.

“In 2007, we celebrated for the first time the International Day for the Fight Against Homophobia and Transphobia in Cuba. It took 15 years of fighting to make it law,” Rodríguez said. “It seems like a long time in the life of an individual, but it’s an achievement in the course of our history.”

2 responses to “Gay Couples in Cuba Marry Under New Law”