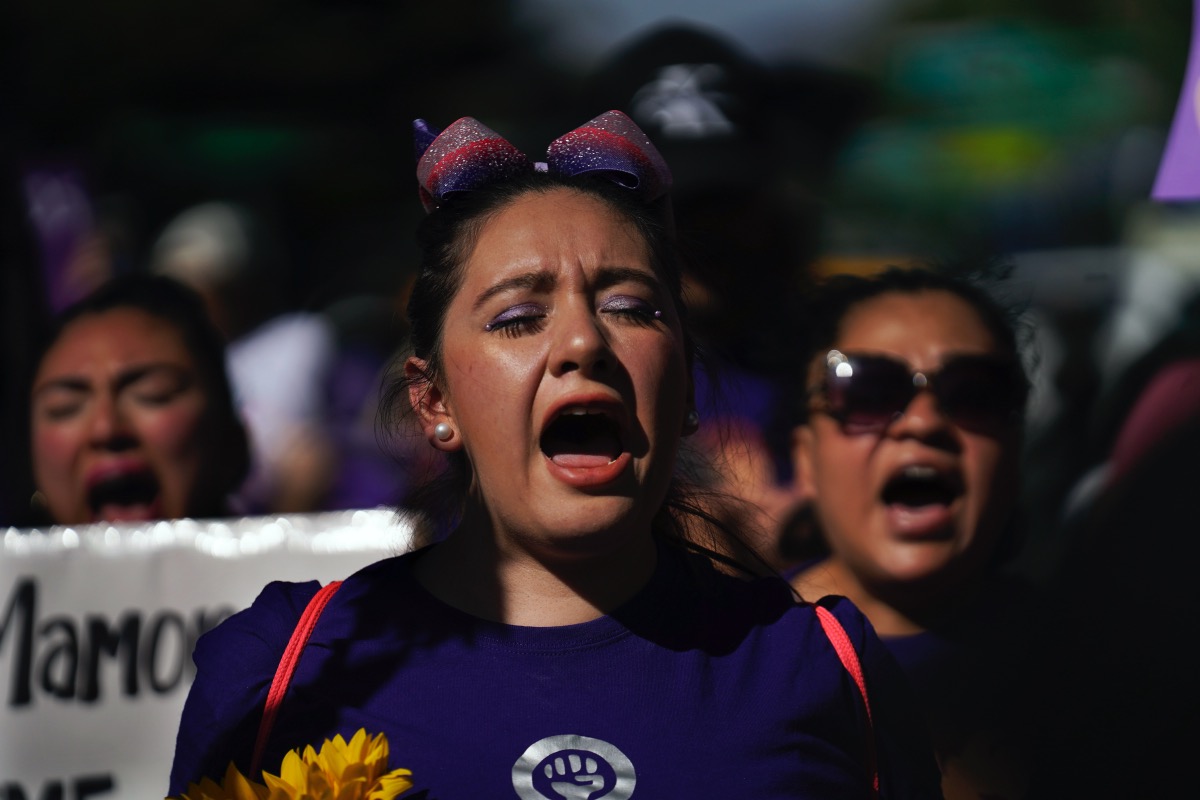 Feminist groups march to protest the murder of Ariadna López, in Mexico City, Monday, November 7, 2022. Prosecutors said Sunday an autopsy on López who was found dead in the neighboring state of Morelos, showed she was killed by blunt force trauma. That contradicts a Morelos state forensic exam that suggested the woman choked on her own vomit as a result of intoxication. (AP Photo/Marco Ugarte)

MEXICO CITY (AP) — The killing of a young woman in Mexico City brought accusations Monday that authorities in a neighboring state intentionally botched her autopsy to cover up for the killer.

The death of Ariadna López, 27, brought up all the issues that have enraged women in Mexico: officials blaming the victim, poor police investigation, and misconduct that has led to a growing number of unsolved killings of women.

Mexico City Mayor Claudia Sheinbaum alleged that the prosecutor of Morelos state, just south of the capital, had ties to the woman’s alleged killer though she refused to describe their purported links.

“It is clear that the prosecutor of Morelos state tried to cover up for the killer of a woman because of his ties to the killer,” Sheinbaum said.

The woman’s body was found last week in Morelos, so officials there initially investigated.

Morelos state prosecutor Uriel Carmona said a state forensic exam showed López choked on her own vomit as a result of intoxication. But officials in Mexico City said Sunday that they had evidence she was slain in the capital.

Carmona’s office did not comment on Sheinbaum’s accusation that the autopsy was botched or that it was part of a cover-up.

The Morelos state anti-corruption office announced later Monday that it had opened an investigation into “possible crimes” and “alleged acts of corruption committed by personnel of the Morelos state prosecutors’ office.”

On Sunday, Mexico City prosecutor Ernestina Godoy said a new autopsy carried out by Mexico City experts found “several lesions caused by blows” on López’s body and listed the cause of death as “multiple traumas.”

López was found dead on the side of a road last week in Morelos state, home to the city of Cuernavaca, a frequent weekend getaway for Mexico City residents. She had vanished after visiting a restaurant with the suspect and his girlfriend and later visiting his apartment, Mexico City authorities said.

On Monday, Sheinbaum showed an image from the apartment building’s security camera purportedly showing the suspect walking through a basement garage with the inert body of a woman over his shoulder.

The suspect, who was apparently a friend of the victim, turned himself in to prosecutors in the northern city of Monterrey on Monday and said he was innocent of the killing. Another woman, described as the suspect’s girlfriend, was arrested in Mexico City.

Some saw suggestions of police incompetence from the start. López disappeared from a trendy central Mexico City neighborhood on October 30. Her body was not found until days later when cyclists discovered her on a path that leads from Mexico City to Morelos.

Her body was identified by relatives only because the cyclists took photos of the victim’s tattoos and posted them online in an attempt to help identify her.

On Monday, dozens of women and their supporters marched in downtown Mexico City to demand justice in López’s case.

“We feel enraged, impotent, above all, mad,” said Omar Rodríguez Díaz, the victim’s brother. “They treat us like garbage and that is sad.”

“We want justice done and prosecutor Uriel Carmona to pay the consequences of his words. He made a mockery of Mexico and of all women,” Rodríguez Díaz said.

Sheinbaum is considered a leading contender to replace President Andrés Manuel López Obrador in the 2024 elections. The dispute Monday sets up a conflict with the governor of Morelos state, who is an ally of López Obrador but not a member of his MORENA party.

Mexico City has its own problems with the killing of women. A young woman, Lidia Gabriela, apparently threw herself from a taxi and died on a Mexico City street Wednesday. Witnesses said Gabriela thought the taxi driver was trying to kidnap her and so she leaped from the vehicle

Morelos state has also had a particularly bad stretch of such killings.

On Friday, the bodies of five women were found in the Morelos city of Cuautla just south of Mexico City. The bodies were found at two different spots in the city, known as a weekend getaway for Mexico City residents.

The prosecutor in Morelos state said the killings appeared to have been carried out by a drug gang, possibly as part of some sort of dispute. Carmona said the bodies were found near a hand-lettered sign of the kind often used by drug gangs.