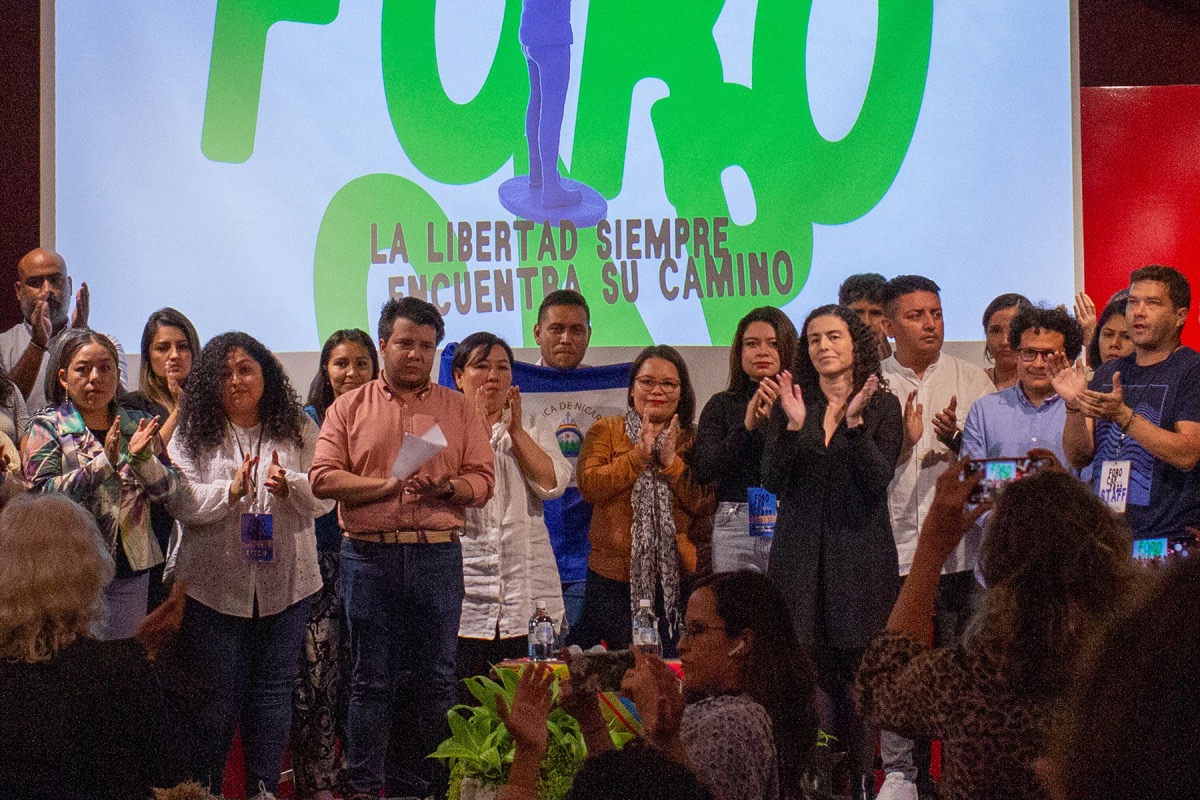 Launch of the Network of Central American Journalists in Antigua Guatemala on November 3, 2022 (Gabriel Adderly/El Faro)

‘Silence Is Not an Option’

On Thursday, November 3, two dozen of the most prominent journalists from Nicaragua, Guatemala, Honduras, El Salvador, and Costa Rica announced the creation of the Network of Central American Journalists, an unprecedented regional association that plans to create mechanisms and channel resources to protect and support independent journalism and news media.

In a statement read in Antigua Guatemala, they asserted that “the Central American press is facing the greatest obstacles to the free exercise of the profession in three decades.”

The group called the “threat of regimes looking to silence us” a regional “emergency,” citing lawfare, exile, and digital harassment of critical and independent media by “groups with economic, political, and military power and organized crime,” and under-protection for Indigenous, women, and rural journalists. They concluded: “Silence is not an option.”

The Network plans to deepen and internationalize support networks for colleagues in danger, foster professional growth and transnational projects, and advocate for press freedom. The group hopes to fill voids left by historically under-resourced and sometimes power-complacent national professional associations.

The Network’s founders include some of the most acclaimed journalists working in independent outlets, including Nicaragua’s Confidencial and Divergentes; Guatemala’s Prensa Comunitaria, ConCriterio, and elPeriódico; Honduras’ Contracorriente; and El Salvador’s Revista Factum, GatoEncerrado, La Prensa Gráfica, and El Faro. The association says that members will participate in a personal capacity and that they expect many others to join.

“The Network of Central American Journalists represents relief, possibility, hope, and is a space self-convened by journalists from the region allowing us to dialogue among peers,” Quimy De León, founding director of Prensa Comunitaria and Ruda and one of the founders of the Network, told El Faro English. “We’ve spent a long time looking internally at our own countries and were lacking a complementary regional gaze.”

Also among the founders are leaders from the Association of Salvadoran Journalists, which has tracked and denounced Bukele-led attacks against the press; and from #NoNosCallarán (we won’t be silenced), a network of Guatemalan journalists who launched a campaign this year to condemn criminalization by the Giammattei government.

The inauguration emerged from months of meetings between its founding members. They then held a working group on Thursday morning to determine a final proposal, inviting international NGOs supporting journalism, aid organizations such as USAID, and diplomatic missions including the European Union, the United Kingdom, Canada, and Sweden to witness the birth of the network and hear their needs.

The U.K. wrote after the announcement that the Network “is the first step of a regional collaboration that will build alliances to defend civic spaces, support journalists’ mental health, and bring citizens closer to their right to be informed.”

To meet and make their announcement they chose the Central American Journalism Forum, held by El Faro in Antigua Guatemala. It’s no coincidence that the annual forum wasn’t held in San Salvador for the first time in its 12-year history, the organizers citing on stage the specter of government obstruction or harassment of guests and sponsors in El Salvador.

Perhaps the most transversal and dangerous obstacle for Central American journalism is lawfare. The son of José Rubén Zamora, the president of elPeriódico and Guatemala’s most prominent publisher, cites threats and harassment as the motive for the turnover of three attorneys in the last two weeks and difficulty in securing his father’s defense against politically-motivated money laundering charges that have kept him in pre-trial detention for three months.

What pushed her into exile, Agencia Ocote reported on Tuesday, was an anonymous publication in conservative outlet República branding her an “extremist” and baselessly accusing her of abandoning her daughters. The outlet pointed to CNN’s reporting on the alleged bribes of Giammattei.

In October, República took over the station Radio Infinita and forced out the independent radio program ConCriterio, co-founded by recognized journalist Juan Luis Font, exiled since early April. “ConCriterio had a five-year contract to rent the Infinita frequency,” founding co-host Claudia Méndez told El Faro English. “In July we received a letter from the owner giving us three months to vacate the radio because they had received a better commercial offer.”

The Guatemala City-based morning show is now broadcasting from another station, but the force-out was not unlike the de-platforming last year from El Salvador’s Channel 33 of Bukele-critical TV programs Focos and República (no relation with the Guatemalan news site).

“For journalists outside of Central America’s capital cities, the precarity, vulnerability, and limitations are much more grave,” said Prensa Comunitaria’s De León. “Inequality is quite deep, the digital divide is wide, and the state only exists to exert control.”

In Nicaragua’s case, the Network of Central American Journalists places the number of exiled journalists since 2018 at over 130. At least eight colleagues have been imprisoned by the Ortega-Murillo regime, which has leaned on a 2020 Cyber Crimes Law, cribbing language from one approved in El Salvador four years earlier, as one of its primary tools in a sweeping crackdown that has amassed over 180 political prisoners.

Nayib Bukele is also looking to borrow from Ortega. Though the approval of a Foreign Agents Law requiring NGOs and media receiving international funding to face arbitrary controls and onerous tax burdens has been stalled, Assembly President Ernesto Castro said in August that the legislative project hasn’t been discarded.

In Honduras, Reporters Without Borders notes that the Castro administration has laid off more than two-thirds of the staff at the National Protection System —an office created in 2015 to defend journalists, human rights workers, and judges— “without valid explanations, generating an almost total paralysis in the implementation of its protection provisions.”

The Committee to Protect Journalists is investigating the slaying of two Honduran journalists this year: Edwin Josué Andino, 23, of Metro TV, abducted by men in police uniforms; and Ricardo Alcides Ávila, 25, of La Tribuna TV. Contrary to a police report that he died in a robbery, Alcides was found with his money, phone, and motorcycle.

The Network of Central American Journalists is also keeping its eye on attacks against the press by Costa Rican President Rodrigo Chaves. Three weeks ago, the high court struck down the government closure of a for-profit event center operated by the parent company run by La Nación, a newspaper reporting on multiple corruption probes facing Chaves. The president, in office for less than a year, has referred to the press as “bad people looking to harm this country.”

Thanks for reading. You can help shine a light on Central America for the price of a coffee a month at support.elfaro.net.