Haiti’s Cartels Might Finally Be Toppled, But Our Real Work Awaits (OPINION) 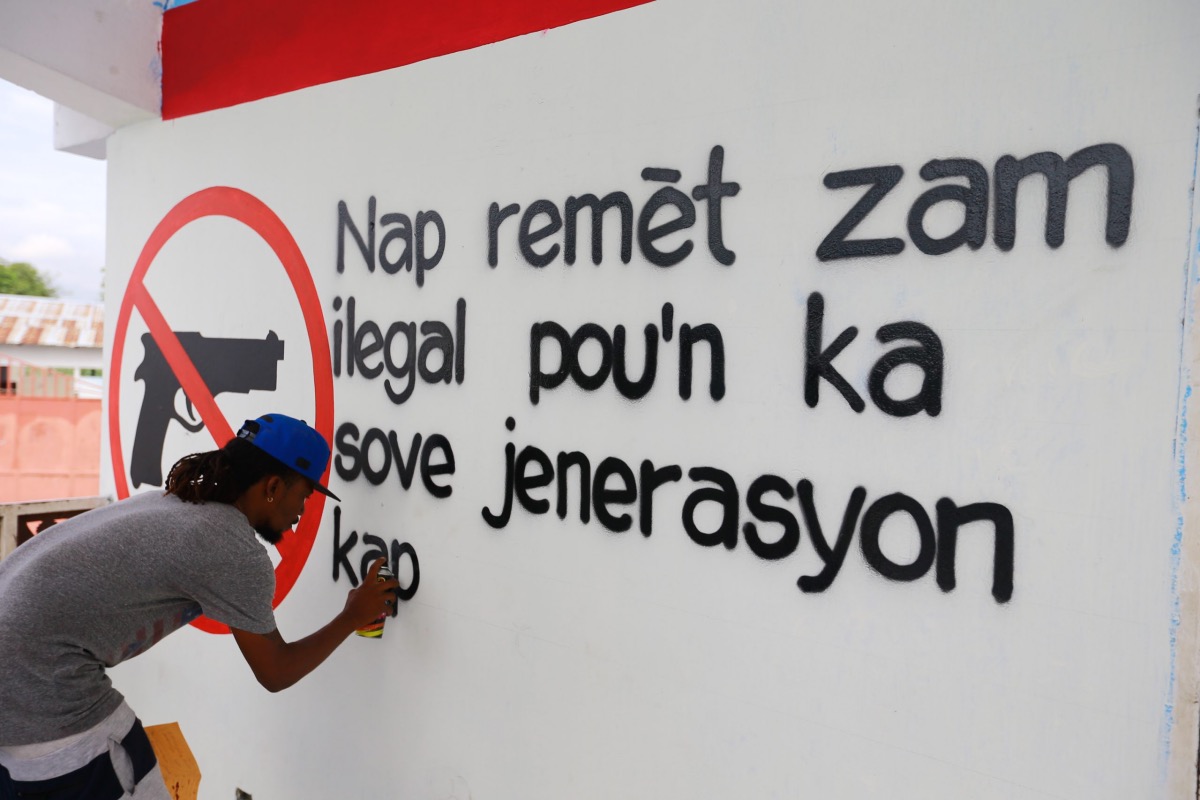 A resident in Cité Soleil writes a sign on a wall that reads in Creole “We are giving back illegal weapons to save the upcoming generation,” in Port-au-Prince, Haiti, Tuesday, May 28, 2019. (Dieu Nalio Chery/Haitian Times)

In the early aughts, I used to enjoy sitting at sidewalk restaurants in Pétion-Ville, savoring a good meal and people-watching with friends and colleagues. One day, I noticed a woman holding a baby in her arms, clearly destitute. Her staring at us eating made me uncomfortable, and I told my friends that.

They laughed and dismissed my sentiments. To them, I was one of those overly sentimental diaspora types who don’t understand much about Haiti.

A few years later, my friends had stopped going to outdoor restaurants. It had gotten too dangerous.

As the country went from bad to worse —even plunging into the first peyilòk (national lockdown) after the 2018 World Cup— it became crystal clear that there was an invisible hand orchestrating the madness. The gangs were blamed for sowing terror, but I was skeptical that these thugs from some of the most marginalized areas of Port-au-Prince had such tactical skills that they could essentially cut off the capital, the most important city, from the rest of the country.

Last week, the United States Treasury Department and the Canadian government imposed sanctions on Senate President Joseph Lambert and Senator Youri Latortue for their ties with the gangs and their involvement in the cocaine trade between Haiti and Colombia.

That’s a good first step, but more needs to be done. Lambert and Latortue don’t operate alone. Surely they have allies and enemies determined to fossilize Haiti’s reputation as the “poorest country in the Western Hemisphere.” The moniker irks almost every one of us Haitians, but we’re unable to turn around the narrative because of people like these senators—people who see the country’s coffers as a personal ATM, and the rule of law and the Constitution as a mere annoyance they can freely trample to meet their needs.

Next, the U.S. and Canadian governments should turn their attention to the activities of people in Haiti who own private ports or control other entry/exit points. Investigators should focus on finding the documents used to smuggle the firearms and ammunition flowing freely into the country, ravaging it like a deadly hurricane in August.

The officials can find out whose names are on the sending and receiving documents; which level of government —international, federal, state, or city— these names occupy; and even the airport security personnel involved, including baggage and cargo.

Who and where are the major transshipment points in the U.S. and Haiti? It goes that far and deep, and as American officials know well, this has been going on for far too long. The chaos has altered for the worse the lives of the average person in Haiti, who is stuck between the proverbial rock and hard place.

Lambert has been dealing drugs for more than 20 years, American officials told the Treasury Department.

Let that sink in.

My adopted government has known that the President of the Senate of my homeland has been a narco-trafficker for two decades, and has not moved on him until now. Lambert, who has vehemently denied involvement in drugs and ties to criminal gangs, is known to be a frequent visitor to the U.S. embassy and the American ambassador’s residence. Yet, he’s been allowed to destabilize the country since 2018.

Latortue, for his part, has also denied having any connections and vowed on social media to defend himself to the full extent of the law. Beyond the gang connection, Latortue has been known as “Mr. 10%” for the percentage of kickbacks he receives for all kinds of transactions—illicit or otherwise.

And so now the onion is being peeled back one layer at a time and our eyes are beginning to water because the stench is strong. How unlucky is Haiti that its beauty is regularly deflowered by miscreants and thugs who refuse to give its mountainous terrain and beach landscapes a chance to reach their potential.

What of That Baby?

Two powerful senators are credibly accused of drug and arms dealing as well as sowing violence. One former president, Michel Martelly, is a self-described cocaine addict and was called a drug dealer every day by journalist Liliane Pierre-Paul during her popular afternoon news show.

How do we turn this hellscape into a livable place?

Well, for starters, we must begin to play our role as concerned citizens and hold our leaders accountable. Even though people, understandably, have checked out and become even more fatalistic than ever, throwing up our hands is not a viable option. That only creates a vicious cycle of bad governance and a country adrift.

Civil society organizations need to be strengthened. The police need to be professionalized, and the press needs to develop the capacity to play its watchdog role even in this broken democracy.

Once order is restored, children return to school safely and adults resume daily chores, Haitians should decide what they want as a nation. How involved do we want to be in electing our leaders, and how do we hold them accountable?

None of this is easy. It requires good faith on all sides and that our word is our bond. It also means that we need to stop othering our fellow citizens, to see them as stakeholders with the same needs of education, health car,e and other basic human rights.

I often wonder what happened to that woman and the baby. Did he join one of the gangs that are terrorizing Haiti? He was dehumanized from birth. I can understand if he did.

We need to change the cycle. It’s going to take all of us.

Garry Pierre-Pierre is a Pulitzer-prize-winning multimedia and entrepreneurial journalist. In 1999, he left the New York Times to launch the Haitian Times, a New York-based English-language publication serving the Haitian Diaspora. He is also the co-founder of the City University Graduate School of Journalism‘s Center for Community and Ethnic Media and a senior producer at CUNY TV. Twitter: @Pierre2Garry

One response to “Haiti’s Cartels Might Finally Be Toppled, But Our Real Work Awaits (OPINION)”