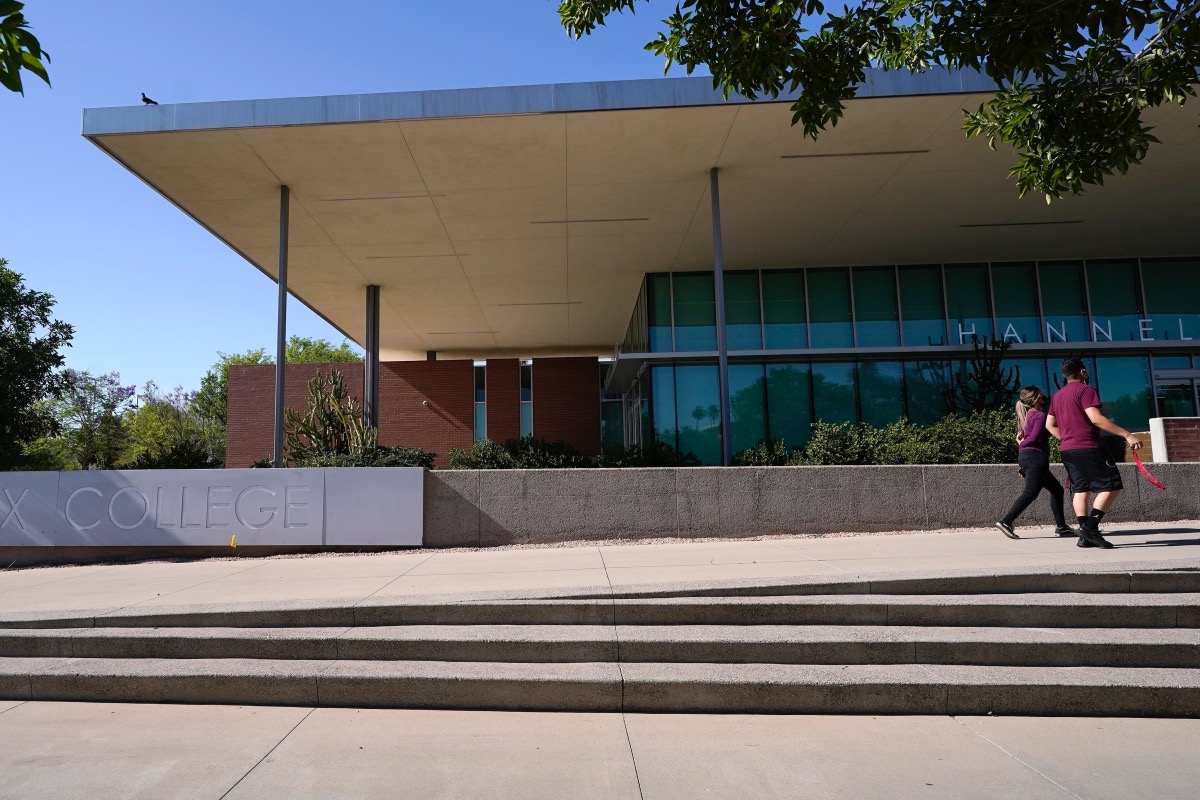 People walk on the campus of Phoenix College, part of the Maricopa County Community College system, on May 4, 2021, in Phoenix, Arizona. Arizona voters have approved an initiative to extend cheaper in-state college tuition to some non-citizen students, cheering supporters who hope the measure’s passage Monday, November 14, 2022, will spark momentum for wider immigration reform in Congress. (AP Photo/Ross D. Franklin)

The Associated Press called the race for Proposition 308 after the latest round of vote releases gave it a big enough lead that the AP determined it could not lose. Arizona joins at least 18 other states, including California and Virginia, that offer in-state tuition to all students who otherwise qualify regardless of immigration status.

The measure was referred to the ballot by Arizona’s Legislature and repeals some parts of an earlier initiative that banned in-state tuition for non-citizens. It will allow all students regardless of immigration status to pay in-state college rates as long as they attended Arizona high schools for two years and graduated.

Advocates say tens of thousands of future non-citizen students who have been in Arizona for years could potentially benefit from the proposition in a state where an estimated 275,000 migrants are living without authorization.

The measure will allow qualifying non-citizen students to pay the current in-state undergraduate tuition of $10,978 per academic year at Arizona’s state universities. Those universities do not have a specific rate for non-citizens brought to the U.S. as children, but officials say more than 300 students are currently paying a non-resident rate for Arizona high school graduates that is 150 percent of in-state costs.

The vote is a turnaround from 2006, when Arizona voters rode a widespread wave of anti-immigrant sentiment to bar students who entered the U.S. without authorization from getting in-state tuition and other financial benefits, even if they lived here most of their lives.

The Arizona legislature in 2010 passed the so-called “show me your papers” law that allowed law enforcement officers to check the immigration status of residents during routine stops. Denounced by activists as racial profiling, the law was partially struck down by the U.S. Supreme Court two years later.

Maricopa County Sheriff Joe Arpaio, who immigration advocates accused of racial profiling, was later voted out of office and found guilty of misdemeanor contempt of court for ignoring a 2011 court order to stop the patrols. In 2017, then-President Donald Trump issued a presidential pardon for that conviction.

Although concerns about security along the U.S.-Mexico border remain high in Arizona, advocates say that attitudes have changed somewhat concerning young people brought to the U.S. by their families when they were small children.

“I’m proud of Arizona and how far we have come,” said Bob Worsely, a retired Republican state legislator and co-chair of the coalition that backed passage of Proposition 308.

Volunteers in recent months knocked on millions of doors and sent out millions of text messages to assure the measure’s passage.

Hazel Villatoro, who attended schools in Arizona her whole life after her parents brought her to the United States from Mexico when she was one year old, said Proposition 308 will change her future.

“I will now be able to achieve my dream of becoming an anesthesiologist,” said Villatoro. “I want to thank the voters of Arizona for doing the right thing.”

Many Arizona business owners say it makes sense to make sure the brightest young people remain and seek jobs in the state, whatever their immigration status, especially with worker shortages in some sectors.

“Proposition 308 is not only the right thing, but also the smart thing,” said John Graham, president of Sunbelt Holdings, an Arizona real estate management, investment and development firm, and board chairman of the Arizona State University Foundation.

On other ballot initiatives, Arizona voters rejected one of the three referendums placed on the ballot by Republican state lawmakers that would limit the citizen initiative process. The defeated measure would have allowed the Legislature to make changes to voter-approved laws if one part of it was declared to be illegal.

Two others referendums changing the initiative process were called by the AP Monday night. One changes the threshold for tax increases in initiatives to a 60 percent vote, while the other limits them to a single subject.

Groups that back citizen initiatives say the changes will limit comprehensive measures. The Arizona Chamber of Commerce & Industry pushed for the limits after a series of initiatives passed, including a minimum wage increase and a tax on the wealthy to fund education that was overturned by the state Supreme Court.