Old San Juan May Soon Be Without Its Iconic Street Cats 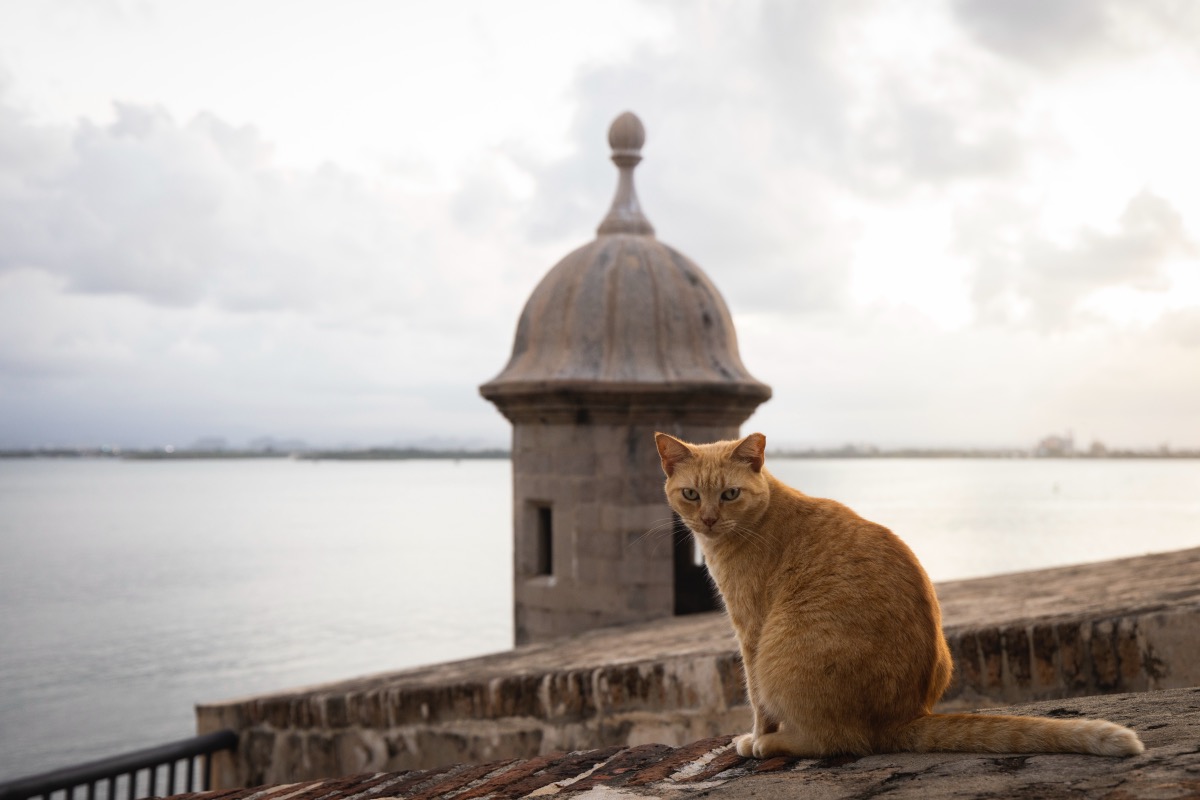 A stray cat sits on a wall in Old San Juan, Puerto Rico, Wednesday, November 2, 2022. Cats have long walked through the cobblestone streets of Puerto Rico’s historic district, stopping for the occasional pat on the head as delighted tourists and residents snap pictures and feed them, but officials say their population has grown so much that the U.S. National Park Service is seeking to implement a “free-ranging cat management plan” that considers options including removing the animals. (AP Photo/Alejandro Granadillo)

SAN JUAN — Following the U.S. National Parks Service’s (NPS) announcement that it plans to deal with the “cat problem” in Old San Juan, local residents and activists say they oppose any attempt to get rid of their feline friends.

The old city’s street cats, first brought to Puerto Rico by Spanish conquistadors more than 500 years ago, have been a staple ever since and are now a tourist attraction. You can’t walk the cobblestone streets without seeing cats slinking between cars or lounging in the sun, at home in the city as much as their human cohabitants.

The NPS claims it has received a series of complaints from “visitors” about cats attacking them and the foul smell of urine and feces. The agency says it has been looking into the issue for years but only recently started putting more resources into the issue after an uptick in complaints.

It has come up with two plans of action: either let the cats stay as they are, or begin systematically removing them. While the NPS insists that removal means the cats will be adopted, activists fear that it would mean most being euthanized.

The agency held two open houses on November 2 and 3, where it presented its plan and timeline to residents, allowing the public to comment. As reported by the AP’s Dánica Coto, the first night was tumultuous, with members of the public voicing their frustration at being asked to only leave written comments without being able to speak. The second night, things went a little more smoothly, but people still had a rage in them that was felt with every rousing speech and reinforced by applause from the audience.

Activists in attendance wanted to completely halt any plan that would remove the cats from the area, instead pushing for the NPS to work with the community-led organization Save a Gato to systematically trap, neuter, and release (TNR) the cats.

The NPS initially reached an agreement with Save a Gato in the early 2000s in which the agency would not evict the cats and the nonprofit would TNR the cats, then start removing some cats and placing them up for adoption.

Save a Gato has been practicing TNR at cost for years —bringing the group “up to their neck in debt”— and ships cats to the United States, where they have a greater chance of adoption. Cartagena claims the little help they have gotten from both the NPS and the San Juan government has led to the cat population booming over the last decade.

“This [program] was never meant to become a shelter,” NPS Superintendent Myrna Palfrey told Latino Rebels. She insists that her organization has “broken with our policy for 17 years,” which is to not feed “invasive species” across the multiple national historic sites and parks it operates in Puerto Rico. The removal process never fully took hold because the cats were “already there,” leading to the agreement with Save a Gato.

When Latino Rebels asked for proof of the cat complaints, Palfrey claimed that many had come from people calling into the NPS. She did confirm, however, that the comments made during the “free-ranging cat management plan” would be made public at some point.

The lack of data and environmental impact studies was one of the most salient issues raised by activists during the two open houses. The only NPS study done was through feeding cameras over a period of a few months, which Save a Gato claims is not enough to assess if there is an actual cat problem. Multiple activists told Latino Rebels that it was “unconscionable” to outline a plan to remove the cats without any studies that show how removing them would affect the old city.

“Things need to evolve. We don’t need to stay in the past,” said Viviana Busquets, who spends about $800 a week running her own program to neuter cats from Puerto Rico.

She is a huge advocate of TNR and has raised the alarm about the “vacuum effect,” wherein removing cats from an area creates a vacuum leading to another cat colony moving into the space formerly occupied by the first.

Busquets proposes that the NPS change its one-size-fits-all policy to better adapt to the environment of Puerto Rico.

“TNR works better in enclosed spaces,” Palfrey told Latino Rebels, explaining why the organization was against adding more resources to Save a Gato’s program.

The validity of TNR is debated within the scientific community, with most scientists and conservationists saying that it doesn’t truly work except in ideal conditions. Other groups, such as the Wildlife Society, oppose the “introduction or maintenance of invasive species and feral species that threaten the survival of indigenous species.”

A study first published in Wildlife Biology found that low-intensity TNR programs are ineffective at reducing cat populations. Meanwhile, a survey of TNR studies conducted by the University of Florida found that TNR colonies have “high immigration rates via human-assisted or natural immigration, which keeps colony sizes from decreasing.” The survey suggested that high rates of adoption and removal are needed to remove rats from cat colonies.

Save a Gato claims that 95 percent of Old San Juans cats have been neutered and that a large part of the boom in the population comes from people abandoning their cats there because they know Save a Gato and others will take care of them, while for years the nonprofit has led an anti-abandonment campaign to discourage such practice.

Many activists, like Busquets, recognize the overpopulation of cats in Old San Juan and are not against removing them if they were to be adopted, but they oppose any plan that would kill cats. They push for all levels of government to work with people living in the community and groups like Save a Gato to help adopt the majority of the cats out of the city.

Throughout the open house on November 3, multiple activists reminded the NPS that Old San Juan’s cat colony has been there longer than the NPS, which was founded in 1916.

Old San Juan has been one of the hottest sites for gentrification in Puerto Rico with many of the colonial buildings being bought up by crypto millionaires and other rich foreigners as people who have lived there for decades are unable to deal with rising rent prices. Some view the push to remove the cats as merely an extension of this trend.

“San Juan has a massive problem of local populations being displaced,” a local woman who asked to not be named told Latino Rebels.

While any plan is months away from being implemented by the NPS, activists remain wary of any harm coming to their furry friends. With so many of them extremely committed to the cats’ cause, the NPS will have a difficult time deciding what to do with Old San Juan’s feline residents.