The Philosophy of Tenoch Huerta (OPINION) 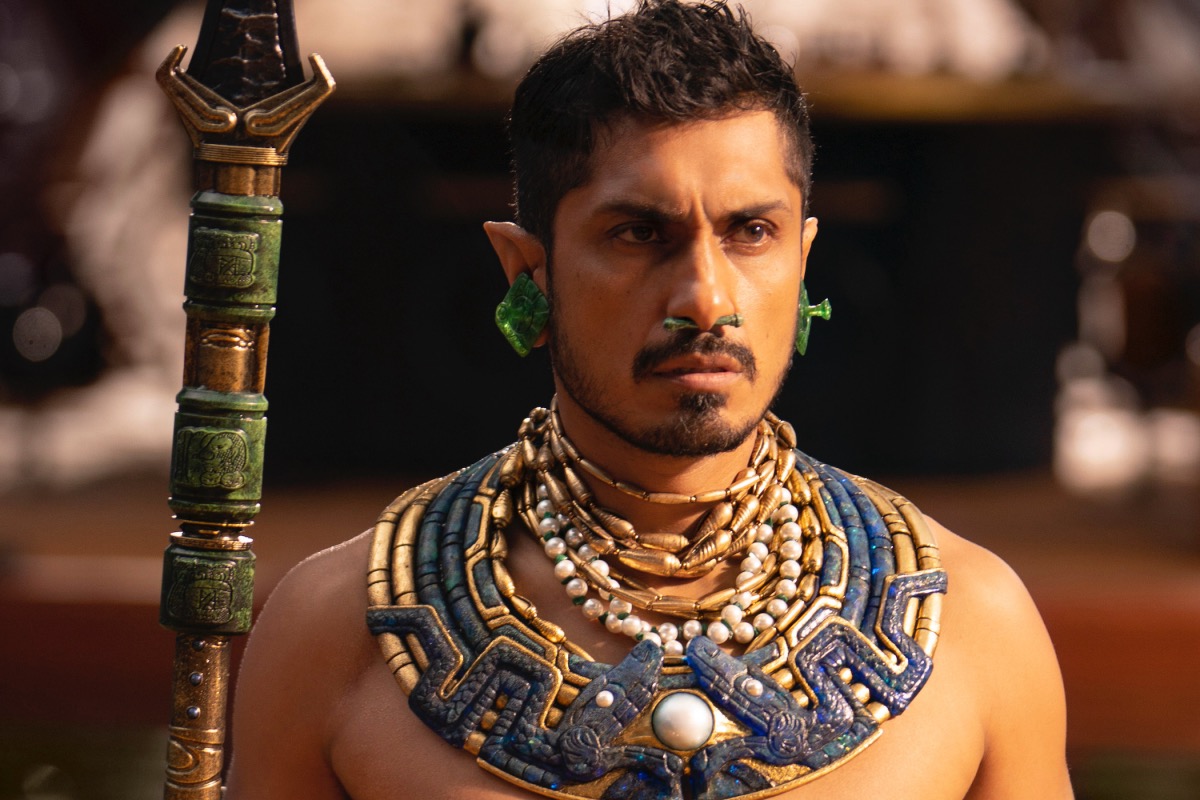 LAS VEGAS — “I don’t believe in pulling yourself up by your bootstraps,” actor Tenoch Huerta told the host of a news show in Mexico City back in January. “There is a system that impedes people like me. I’m an abnormality of the system. I shouldn’t be here because I don’t come from any place of power. I’m not light-skinned… I don’t have connections. I simply arrived based on talent, necessity… and resilience—a ton of resilience.⁣⁣

“What I would tell little kids is what I’ve always said, the best advice that my teacher, my mentor, gave me… He would tell me: ‘They’re never going to put you in the game—NEVER, never in your life. They’re never going to put you in the lineup. You’ll never headline. They’ll always put you in at the end. Maybe some smart director will put you in during the final minutes of the game. But when they put you in, score a fucking goal that brings down the stadium. And to make that goal you have to be faster, taller, stronger. Read more. Study more. Train more… Understand more. Question more. Be more stubborn and foolhardy. Knock on more doors. And when the tiniest chance opens, give it one helluva kick.’ ”

Tenoch —who’s of Nahua and Purépecha descent, though he doesn’t identify as Indigenous— plays Namor, king of a Mayan tribe of water-breathing superhumans, in the new Blank Panther sequel, Wakanda Forever. Namor’s people speak Yucatec Maya and refer to him as K’uk’ulkan, the “feathered serpent” god to whom the great temple at Chichen Itza is dedicated.

After hearing Tenoch talk about “making it,” though, I’m gonna start calling him Marco Aurelio, after the wise old Roman emperor. In his Meditations, Marcus Aurelius lays out the tenets and practices of Stoicism, a school of Greco-Roman philosophy that promotes good living through a deep understanding and acceptance of the way things are.

“Be like the rock,” the emperor writes, “that the waves keep crashing over. It stands unmoved and the raging of the sea falls still around it.”

“A cucumber is bitter—throw it away,” he says a few chapters later. “There are prickly bushes in the road—go around them. This is enough. Don’t add, ‘Why do these things exist in the world?'”

These are the emperor’s private notes to himself, mind you, written in the late 2nd century as he was leading a campaign to expand his authority in Eastern Europe. He never thought anyone would actually read it, much less that his words would become a popular guide for living almost 2,000 years later.

That pretty much captures Stoicism, which can also be summed up by the popular prayer:

What Tenoch, the emperor and the prayer mean is that most things in life are out of our control, and to fret about those things is to invite a world of pain onto yourself.

What are you gonna do given that Hollywood is racist and there’s shit in your way? What can you do?

Those are the only questions that matter.

While I tend to agree with those on the Left about what’s wrong with society, I often find myself at odds with them about how to act. I, like them, realize that the world will have to be changed at the roots if we’re going to ensure that everyone’s basic rights are respected and their needs met, but we disagree on how to get there and what to do with ourselves in the meantime.

My habit of thinking is more in line with the Stoics, with what Tenoch said about trying not to complain about the way of the world, but instead focus on developing yourself to be the very best you can be within the present conditions, and take full advantage of any opportunity that opens up.

To be the rock with the world going apeshit all around it, or the man who chucks the bitter fruit and goes about his day unbothered.

To choose not to feel harmed, and by that, not being harmed.

Younger liberals, on the other hand, which is who I’m talking about, are more epicurean in their philosophy. Epicureanism is the other main Greco-Roman school, but unlike the Stoics, who focused on a person’s internal environment, the Epicureans focused on the external, looking to lead a good life by maximizing pleasure and avoiding pain.

The Epicureans would’ve supported the current liberal policy of creating safe spaces for people to work, play, and learn. But the Stoics knew that the world isn’t a safe space, and no one should nurture any expectation of it ever being so.

The question, again, is how to think and behave in this unsafe world, in a world constantly threatening us with headaches and heartache. The Epicureans avoided the pain, while the Stoics just dealt with whatever without saying a word, trying not to give it even a single thought.

I’m not saying liberals shouldn’t complain, shouldn’t be protesting against racism, sexism, capitalism, misogyny, homophobia, transphobia, xenophobia, etc. Protesting and organizing are within our power and the right things to do.

Of all the schools in the ancient Greco-Roman world, the Epicureans were by far the most popular. Their philosophy is easier and more fun, being more focused on pursuing pleasure more than anything else, if in moderation—though the Epicureans also practiced moderation with their moderation, meaning they liked to splurge every now and then.

The first followers met in Epicurus’ garden, at his house just outside Athens, where they held delicious feasts and drank wine and talked and laughed, avoiding politics or anything that was a downer. “The Garden itself,” writes a professor of history, “apart from the city, a private space, and pleasurable—became a symbol for the detachment and hedonism of the Epicurean school.”

While Epicurus and his followers were drinking and laughing it up at his peaceful place outside the city, Zeno, the founder of Stoicism, was training his students at the Stoa Poikile, or “Painted Porch,” right in the heart of the city—hence the name of his school. Compared to Epicurus and his clique, the Stoics were all business.

Epicureanism died in the 200s, but it’s been growing again in popularity since the French picked it up in the 1600s, glamorizing the life of a man —or woman, but usually a man— who has money and lots of free time and enjoys good food and drink and being in beautiful surroundings with beautiful people: a playboy, basically.

Today, the word epicurean has come to describe someone who enjoys the good life, a bon vivant.

In fact, come to think of it, the difference between the older generations and the newer ones today is the progressive abandonment of Stoicism—and as someone living on the cusp of the two, a few days from turning 38, I know from experience.

Pleasure-seeking and pain avoidance are clear features of Gen Z culture especially. I have an 18-year-old daughter, and my wife and I have noticed for years how she and her peers avoid uncomfortable conversations and situations, ending a friendship or any kind of relationship, for example, at the slightest sign of work.

Our constant advice to her is something the Stoics probably told their kids: “Tough it out.”

We saw a change in her after she joined tennis, probably because there’s no Epicureanism in sports, where if you want to succeed, you have to be stoic—which might explain why esports are more popular with the younger generations, since there’s almost no pain involved except bruised thumbs and the aches from sitting in the same position for so long.

Older folks, meanwhile, tend to live by the Stoic creed of no pain, no gain—or “pain plus work,” as Jay Z puts it in “Guess Who’s Back.”

“Life is struggle,” said Nietzsche, and Camus compared life to the old Greek myth of Sisyphus, who was punished by Zeus by being forced to roll a boulder uphill every day for all eternity, only to see it roll back down every night.

“Choose the level of torture you’re comfortable with,” comedian Jerry Seinfeld says about success in life—not an Epicurean attitude.

You get the picture. The road to a good life is not paved smoothly, and there are few safe spaces to rest along the way, if any.

Immigrant culture is clearly stoic, while American culture is clearly epicurean by comparison, which explains the conflict many first and second-generation Latinos find themselves in: Is life about hard work and marching on through pain —like our parents or grandparents did— or is it about maximizing ease and pleasure?

As ’80s babies and the children of immigrants, my wife and I have been struggling with this question for years…

What Tenoch originally said in January is that he doesn’t believe in “echaleganismo,” a word I’d never heard before, but which conveys the idea that you can achieve anything simply through hard work.

“There is a system that impedes people like me,” he says. Hard work ain’t enough.

How to act within an unchanging system —or a slowly changing one, at most— is the gist of his advice to kids: You can prepare yourself for any opportunity you’re given, you can even work hard to receive such opportunities, “Knock on more doors,” but there’s no guarantee you’ll ever get a shot.

The only thing you can control is the level of your own greatness, your readiness for whatever door opens for you. The rest is out of your hands.

So échale ganas, roll with the punches, and pray for luck.

One response to “The Philosophy of Tenoch Huerta (OPINION)”