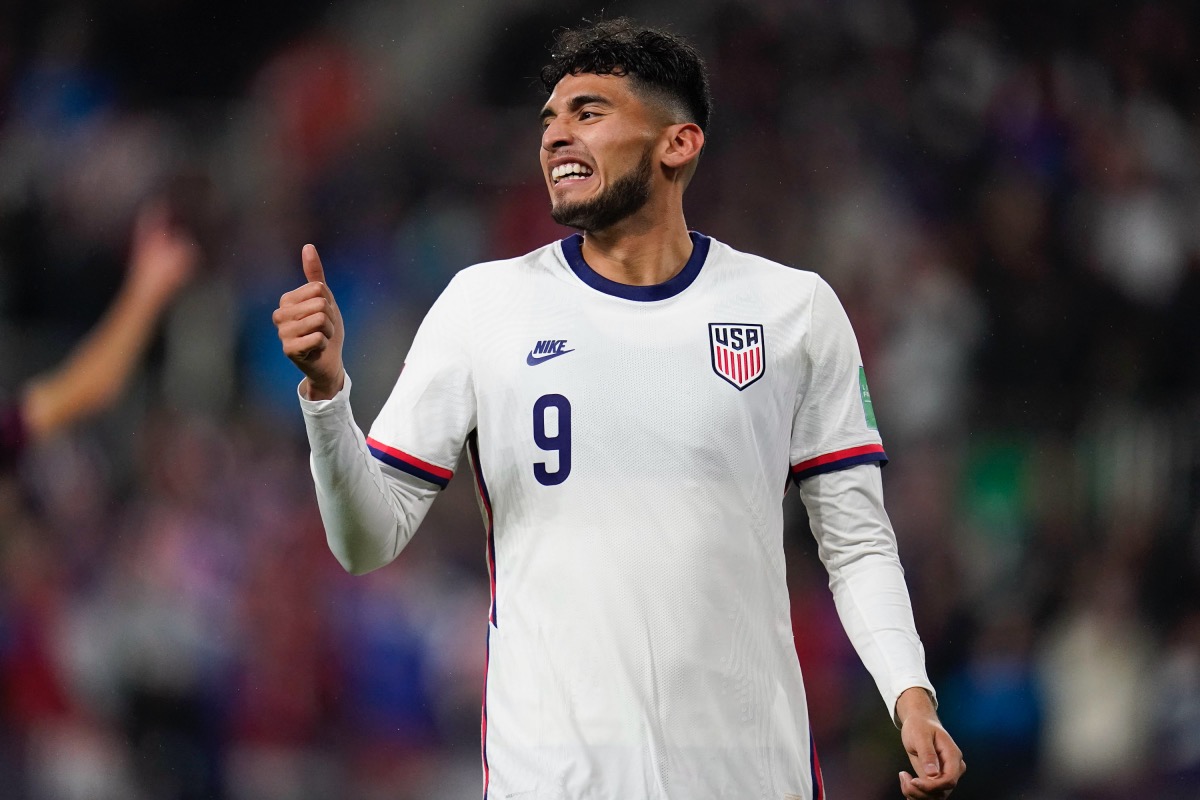 United States’ Ricardo Pepi gestures after a play during the first half of a FIFA World Cup qualifying soccer match between Mexico and the United States, Friday, November 12, 2021, in Cincinnati. The U.S. won 2-0. (AP Photo/Julio Cortez, File)

The U.S. Men’s National Team fought their way to a draw.

Stop me if you’ve heard this before.

They squandered multiple golden opportunities in their 1-1 tie with Wales to begin World Cup play on Monday. With about nine minutes to go, Antonee Robinson hit Josh Sargent with a beautiful cross, whose header was saved at point-blank range.

Earlier, with more than 22 minutes remaining, Christian Pulisic had found Robinson, who had broke free from multiple defenders, trying to find Sargent again in front of the net before a Wales clearance.

There were more instances like this, but you get the idea.

The U.S. dominated possession in the first half but were outshot by Wales 6-7, putting only one on target.

Last year I wrote about Mexican-American players centering the USA vs. Mexico fútbol rivalry ahead of the 2022 World Cup.

Last year, you had David Ochoa, Julián Araujo, and Efrain Álvarez decide to represent Mexico over the United States internationally, while Ricardo Pepi chose the U.S. team, playing an integral role in its run in World Cup qualifiers.

When Pepi joined the Senior National Team last year, he was just 18 years old. From then through this summer, he netted three goals and had the second-best goal average for the USMNT in World Cup qualifying.

You can even argue that this team might’ve failed to qualify were not for Pepi’s three goals in late 2021.

On the third matchday, he netted the go-ahead goal on the road against Honduras, giving the U.S. their second goal in what became a 4-1 romp. A month later, Pepi was the lone goal scorer in a 2-0 win over Jamaica, which elevated the U.S. in round three of the CONCACAF qualifiers for the World Cup.

They finished in a tie with Costa Rica for third place in the group but had the tiebreaker. Costa Rica subsequently qualified for the Cup but needed a playoff to do so, beating New Zealand for the last spot.

For a team lacking depth at forward and overall star power, it seemed as though Pepi was poised to crack the 26-man World Cup roster at 19 years old—and perhaps even in the conversation to start. Former team captain Clint Dempsey seemed to think so.

But team manager Gregg Berhalter thought differently and, in a controversial move, left Pepi off the team entirely.

“Ricardo Pepi could have a great argument for why he should be there, and I can understand that argument,” Berhalter acknowledged after the announcement was made last November.

On an ESPN show revealing the roster, Berhalter added, “That was a really difficult conversation I had to have with him,” referring to Pepi. “He scored three goals in World Cup qualifying, and he’s not going to be part of the program. Josh (Sargent) is competing in the (English) Championship, and he played in the Premier League last year. We’re playing Wales and England, and both teams are stocked with players from those leagues.”

Berhalter cited Pepi’s lack of physicality, listed at 6-foot-1 and just over 160 pounds. Other forwards mentioned by Berhalter —Jordan Pefok and Jesus Ferreira— are listed at 6-foot-3, 198 pounds, and 5-foot-9, 150 pounds, respectively.

Regardless of how Berhalter justifies his decision, leaving Pepi off the roster is a missed opportunity for the USMNT.

In club fútbol, Pepi produced 13 goals in 31 appearances for FC Dallas in 2021, which coincided with his USMNT debut. He later moved to FC Ausburg in Germany’s top league, the Bundesliga, where he failed to score in 15 matches, but recently regained form with FC Groningen, which plays in the Eredivisie, the Netherlands’ top league.

Berhalter discussed Pepi’s struggles in March: “Am I concerned about Ricardo Pepi? Absolutely, no question about it. We want him scoring goals. We want all our strikers scoring goals.”

“One thing with Ricardo is getting back to the basics with him,” Berhalter added. “He’s a goalscorer, and that comes naturally to him. And that’s something we need him to refocus on—clear his mind, focus on doing the small things, getting in good positions. Because if he gets in good positions, we’re comfortable he’s going to score.”

After the failed run with Ausburg, Pepi recorded seven goals and two assists in his first 10 matches with Groningen, including one immediately after the World Cup snub.

“It’s disappointing because I felt like I gave myself the best opportunity to be in the World Cup roster,” Pepi said on missing the USMNT roster. “I felt like I had a chance, but it was also not disappointing at the same time because, like I said, I did my thing. I went out there, I played minutes, and I scored goals, so I’m really happy with that situation. At the end of the day, it’s the coach’s decision that I can’t control.”

So, not only is Pepi excluded, but not showcasing him on the world’s grandest stage may have ripple effects internationally.

Still, what will this mean for other dual nationals? Will it signal that you could choose to play for the U.S. team and become one of the main factors in its qualifying for the World Cup for the first time in eight years, only to be slighted for arguably lesser players? (Haji Wright?!)

Amid the 2026 World Cup scheduled to take place in North America, the fight for Mexican-American fútbol stars has never been as paramount between the two rival countries. If the likes of Pepi aren’t on this year’s USMNT World Cup roster, will there be other dual nationals now willing to spurn the U.S. team for other countries between now and 2026?