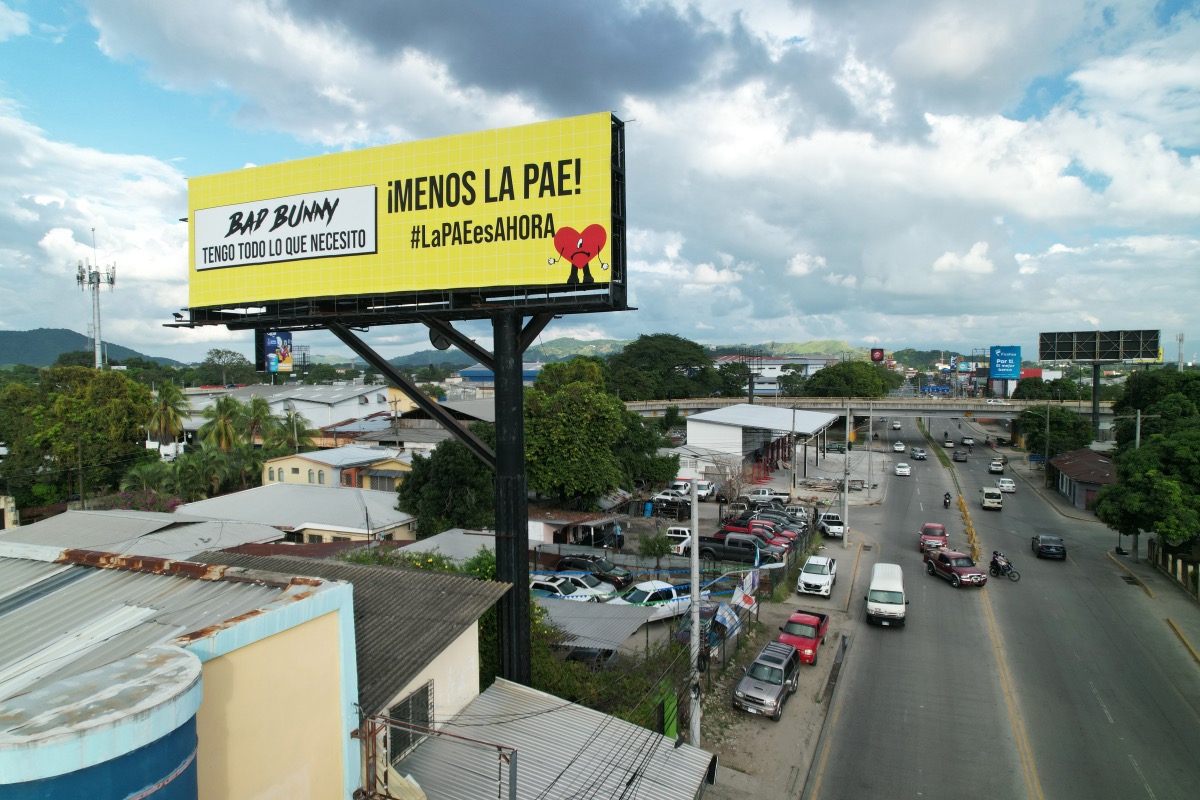 A billboard along the route from the airport to the stadium where Bad Bunny is set to perform on November 29 reads: “Bad Bunny, I have everything I need, except the emergency contraceptive pill!” San Pedro Sula, Honduras (La PAE es Ahora)

TEGUCIGALPA, Honduras — On January 27, the inauguration day of the first woman president in the history of Honduras, President Xiomara Castro ended her speech by reiterating her commitment to defending “all the rights” of women in her country. The impact of these words, serving as the banner of her campaign, resonated strongly with Hondurans who elected her into office.

The harsh reality is that, in Honduras, a woman is raped every three hours, with a third of the rape survivors being young girls, and the spiral of violent acts that threaten the life, integrity, and dignity of women and young girls seems to be endless.

Since the new government that was imposed by a coup d’état in 2009, Honduran women have worked tirelessly to recover the ground they had gained in terms of reproductive rights. Thanks to feminist organizations, activists, and women across the country who overwhelmingly supported the president, Honduras is no longer a place where gender-based violence is invisible, and there is hope that President Castro will fulfill her campaign promises—among them, to finally allow the use of emergency contraceptive pills, or PAE as it is known in Honduras, for all women and girls in the country.

Honduras is the only country in Latin America where access to emergency contraception (EC) is banned and one of the few countries in the region where abortion is prohibited under any circumstances, including in cases of rape or incest. While across the rest of the continent, accessing EC can be as simple as entering a pharmacy, in Honduras this has not been achieved, largely because of stigma and the false belief that the morning-after pill causes abortions.

Earlier this month, Honduran Health Minister José Manuel Matheu Amaya announced that the government intends to approve the use of the EC pill, but only for rape survivors. On the same day, the UN Committee on the Elimination of Discrimination against Women published its findings on Honduras and urged the country to end its criminalization of abortion and to allow the distribution of EC in all circumstances.

Honduras is a dangerous country for women and girls. The country has one of the highest rates of sexual violence and child pregnancy, and only 10 percent of those cases are reported due to fear, embarrassment, or the lack of protocol when reporting a rape. Those who report the abuse often experience repeated trauma through re-victimization. Additionally, marginalized women and girls living in rural areas often do not receive medical care after suffering sexual assault, due to not being able to access a medical facility because of financial and transportation barriers.

Honduran activists have worked to dismantle myths and misinformation through the creation of the Let’s Talk About What It Is campaign in 2019. In addition to its educational work, the campaign called for action, in partnership with the Avaaz community, collecting nearly one million signatures in support of access to the EC pill which were presented to President Castro on March 8, International Women’s Day.

Recently, a campaign called La PAE es Ahora released a video calling on President Castro to keep her promise to Honduran women and girls by prioritizing women’s rights and taking the urgent actions needed to legalize emergency contraception for all. Additionally, billboards calling for access to EC have appeared in San Pedro Sula along the route to the Estadio Olimpico, ahead of Bad Bunny’s World’s Hottest Tour concert on November 28.

In one of Bad Bunny’s latest songs, “Me Porto Bonito,” he sings: “Si quiere te hago un bebé o te traigo la Plan B“—If you want I’ll give you a baby or I’ll bring you Plan B.

Activists are asking, “If Bad Bunny has this clear, why doesn’t the government?”

Approving the use of the emergency contraception pill will have a positive ripple effect in all facets of Honduran life. Taking a step like this will demonstrate that President Castro and the Honduran government are keeping their promise to uphold human rights and support all women of reproductive age.

PAE is just the beginning, but it marks progress in ensuring the reproductive freedom of all Hondurans.

Jinna Rosales is a demographer, researcher, and professor at the National Autonomous University of Honduras, as well as the executive director of Grupo Estratégico por la PAE. She also founded and directs the organization Acción Joven, where she works on access to sexual and reproductive health for young people. Twitter: @RosalesJin7 @PaeGrupo