The Ethnic Studies Ban has made headlines across the nation. Detractors have called the ban unconstitutional and  “have defended the Mexican-American studies program as no different than African-American or Native American studies classes.” Here at Latino Rebels we decided to give you a bit of an in-depth look at some of the books that are “deemed to be divisive.”

Here are three of the books targeted by state superintendent John Huppenthal:

Rethinking Columbus: The Next 500 Years by Bill Bigelow  is composed of poems, essay and interviews of Native Americans who were oppressed 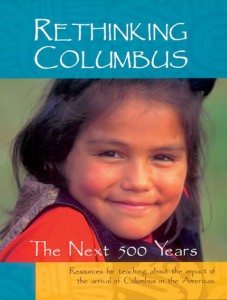 by the “European invasion of North America.”

We need to listen to a wider range of voices. We need to hear from those whose lands and rights were taken away by those who "discovered" them. Their stories, too often suppressed, tell of 500 years of courageous struggle, and the lasting wisdom of native peoples. Understanding what really happened to them in 1492 is key to understanding why people suffer the same injustices today.

Occupied America: A History of Chicanos by Rodolfo Acuna  All reviews were positive for this book. Some have called it bias but one of the best books on Chicano history.

Pedagogy of the Oppressed by Paulo Freire

First published in Portuguese in 1968, Pedagogy of the Oppressed was translated and published in English in 1970. The methodology of the late Paulo Freire has helped to empower countless impoverished and illiterate people throughout the world. Freire’s work has taken on especial urgency in the United States and Western Europe, where the creation of a permanent underclass among the underprivileged and minorities in cities and urban centers is increasingly accepted as the norm.

The history of the United States goes beyond just Europeans landing on Plymouth Rock and Thanksgiving. Both sides of slavery, oppression, racism and discrimination were unfortunate events that were fundamental into shaping  the country into what it is today. The purpose of education is not only to teach but to encourage students to expand their knowledge. If  students in Arizona  are stripped off of learning about this important piece of history then  John Huppenthal is no better than the oppressors cited in these textbooks that they have xcluded from the educational system.

Update: Below you will find other textbooks banned by the State Superintendent:

500 Years of Chicano History in Pictures edited by Elizabeth Martinez

Chicano! The History of the Mexican Civil Rights Movement by Arturo Rosales