Last week, I shared a post that included what my friends were saying about an open letter Univision's Jorge Ramos wrote to the Republican Party. I wrote that post because in the end, no matter what you think about Ramos, he is still the most popular and well-known Spanish-language news anchor in the United States. To me, it was the equivalent of a Brian Williams writing a similar letter. The responses I received were very passionate, to say the least, but one thing was clear: I have smart friends. Any of them could easily grace a Sunday news roundtable and discuss issues with grace, intelligence, and professionalism.

This past weekend Ramos followed up on his promised to write an open letter to the Democrats. The full letter can be seen here on his personal site. Titled, "NO LOVE LOST," Ramos offers his take on how the Democrat Party has its own issues with U.S. Latino voters. Here is just a sampling of what he wrote:

The relationship between our community and the Democratic Party is like that of an old married couple who have been together for so many decades that the enthusiasm that once made the relationship interesting is long gone. As comfortable as we have become with each other, keep in mind that love can be unpredictable. Have you forgotten the presidential election of 2004, when Republican President George W. Bush won 44 percent of the Hispanic vote?

During Obama’s first three years in office, political conditions in the United States started to become favorable for a similar upset. As a candidate running for the presidency in 2008, Obama had promised to submit to Congress a proposal for immigration reform within his first year, but then he failed to do so. And Democratic lawmakers did not show any urgency in moving forward with fulfilling Obama’s promise—not even when the party control

led both chambers of Congress in 2009 and 2010. That should have been a priority. Instead, undocumented immigrants living in the shadows were left without hope. The current administration has deported more than 1.2 million immigrants, more than any other in U.S. history. And despite the White House’s policy of prioritizing for deportation those undocumented immigrants who break the law, many thousands who have been deported do not have a criminal history. The president is likely responsible for having split up many Hispanic families with children who have American citizenship.

After saying that the Republicans essentially lost a golden opportunity to capitalize on many U.S. Latinos' disappointment and frustration with President Obama, Ramos closes his letter with the following:

But that’s not enough to keep us together. So why don’t we just concede that ours is a love that has conditions attached?

The strength of our relationship is based on Democrats’ history of standing with the Hispanic community in matters that involve discrimination—recently by challenging anti-immigrant laws and launching a federal investigation into Arizona Sheriff Joe Arpaio’s policies. Democrats share our community’s concerns about expanding educational opportunities and increasing access to health care. Also, though it hardly counts as immigration reform, Obama’s courageous decision to halt the deportations of almost 2 million undocumented students is proof that he is sensitive to an issue that is important to us.

So let’s make a deal: In exchange for Hispanic votes, we want you to stop taking us for granted.

Do not assume that we will always cast our ballots in your favor.

Do not assume that we’ll happily vote for you after a few Democrats speak Spanish during your upcoming convention in North Carolina.

Do not assume that boisterous campaign promises are all that’s needed to keep us together. Promises are no longer enough.

I asked nationally syndicated columnist Esther J Cepeda (@estherjcepeda on Twitter) to offer her thoughts about Ramos' letter. What I love about Esther is that she is not shy in engaging her readers and her social networks in a way that I think speaks to the era of the "new digital columnist." She writes what she writes, doesn't shamelessly self-promote her works, but also takes the time to respectfully reply to her readers. It is no wonder that Voxxi recently named her one of the "most powerful Latinas in social media."

This is what Esther had to say:

I couldn't agree more with Jorge Ramos' take on the Democratic Party's treatment of Hispanics as sure-thing voters, and his demand for more respect and consideration.

But, to extend the author's metaphor, any spouse that has been in a long-lasting marriage knows that just telling your mate that you don't want to be taken for granted anymore isn't going to change your relationship. And telling him or her for the hundredth time won't do it either.

It usually takes a big, meaningfully symbolic event to get the attention of the partner who underestimates their loved one's value. Maybe that event will end up being President Obama's loss in the fall.

Either way, both parties should wise up and follow Ramos' advice to make a real effort to substantively include Hispanics in their political agendas.

Esther and I will occasionally tweet examples of the "Hispanderfiesta," and yes, Democrats do it too, just like Republicans. I liked what she had to share here, and I was honored that she took the time to write back to me.

Another friend I asked was award-winning journalist Isaac Cubillos (@IsaacCubillos on Twitter), named as one of the "100 Most Influential Hispanics in the U.S.." by Hispanic Business Magazine in 1999 and the CEO of La Raza Unida 21. Isaac is a true journalistic padrino. 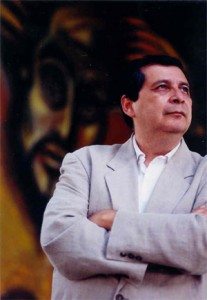 Isaac offered a different take that also resonated as well:

Ramos' focus on immigration is fine, but nary a word for the 75% of Hispanics born in the U.S. So his letter is from an immigrant's perspective. He can't be faulted for his narrowly written message. He works for a Spanish-language organization primarily viewed by immigrants. So his message to the Democrats is from that perspective. The Democrats are looking to woo voting Latinos—and jobs, education and civil rights are the primary concerns for the majority of Hispanics.

Isaac's perspective makes sense to me. Even though the I-word is an issue, there are many other issues that matter. As US Latinos continue to make their mark in the bigger democratic experiment that is the United States of Americans, Democrats cannot just assume they will get the votes because they are not Republicans. They must show it through their actions as well.

Finally, even though I included him last week, I HAD to ask Professor Stephen Nuño (@stephenanuno on Twitter) about the letter.

Stephen has become one of my favorite political pundits. I am a loyal reader of his NBC Latino columns, and I always love to talk and tweet politics with him. Here is what El Profesor told me:

Mr. Ramos' letter to the Democrats is more tortured. A sense of scorn for the Democrats betrayal of Latino families who were promised an administration who would be friendly to their loved ones seeking a pathway to legitimacy.

When a Republican administration tried to fix the immigration system, during the George Bush presidency, Democrats were hesitant to help a Republican. Ramos sees that despite the rhetoric, there are political forces at work that are too tempting to ignore even for those claiming to be our friends.

Until the Republicans see a political future in the Latino vote, Democrats will have less pressure on them to address those issues most important to us. That said, the only solution for Latinos is to talk to their neighbors and work to integrate more people into the political process.

So that was what what my friends said. Each one brings a perspective that makes this issue a bit more nuanced and complex.

It is no wonder that according to Gallup, more and more US Latino see themselves as independent, although they tend to lean more towards the left of center than right of center. However, Ramos is right in one aspect: promises were made in 2008 and those promises were broken. Democrats can blame it on the other guys all they want, but my sense is that voters are pretty much done with hearing it is all about the other guys, and they are actually smart enough to figure out for themselves that the GOP has been mediocre at best the last few years. Imagine if the GOP actually put forth a candidate with gravitas, and not a Republican John Kerry.

And that is why many US Latino voters are stuck. I keep hearing that at least the Democrats are the "lesser of two evils." Maybe so, but that sentiment is so disappointing. Why can't we demand to for all politicians to raise the bar and the discourse? Why can't we keep saying, "Basta ya con las Hispanderfiestas?" Why are we still allowing major political parties to be the ones in charge when in fact, it is we the voters who have the final say? And why aren't third parties taking advantage of this dissatisfaction? I mean, REALLY taking advantage of the voter apathy? Like engaging millions who don't think they have other alternatives besides a donkey and an elephant?

Some would call me naive for wishing that politics in this country become more transparent, more authentic, and more real, but stop and think for just one minute:  four years ago in 2008, I didn't even know people like Esther, Isaac, or Stephen. Now we are sharing our thoughts and ideas on a daily basis through posts and tweets. We are learning from each other and realizing that yes, there is power in numbers. The question is: will we ever take advantage of that power?

Julio (Julito) Ricardo Varela (@julito77 on Twitter) founded LatinoRebels.com (part of Latino Rebels, LLC) in May, 2011 and proceeded to open it up to about 20 like-minded Rebeldes. His personal blog, juliorvarela.com, has been active since 2008 and is widely read in Puerto Rico and beyond. He will pen a weekly column on LR each week. Recently, Julito represented the Rebeldes on CBS' Face the Nation, NPR, and The New York Times.