I will be honest with you. I went into last night’s Democratic National Convention keynote address by San Antonio Mayor Julián Castro with low expectations. Sure, everyone was billing it as the first time a Latino was being featured as a keynote speaker in the history of political conventions, but after a week where people like Marco Rubio, Susana Martínez, and Luis Fortuño were rolled out by the Republicans in Tampa, I was kind of getting Latino-weary. Castro, indeed a politician whose star is rising, was just another part of the Hispanderfiesta that was becoming the standard between both parties.

And after listening to Fortuño (charlatan), Martínez (meh) and Rubio (guy had to cut his speech because of a empty chair), the Democrats’ Latino answer in Castro was, to me, just going to be yet another of the “look at us! we have Latinos, too!” moment.

Low expectations coming in, but in the end, did Castro deliver? Yes, and then some.

Did he do his job of hitting on the Democrats’ key points? Yes.

Did his style and his story instill a sense of pride and achievement among many Mexican American voters? Big time.

Did this sense of pride resonate with other US Latino voters from different backgrounds? Absolutely.

So, with that in mind, here are my Six Big Picture Thoughts about Castro’s speech:

1. Social Media Matters: The cynics can negate the power of social media all they want. In the end, delivering a political message and making sure it spreads organically (with an emphasis on organically) through tweets, shares, memes, and posts is a goal that all political parties must aspire to. Last night, Castro trended #2 globally on Twitter. Like #2 in the world. In fact, @gov tweeted the following: 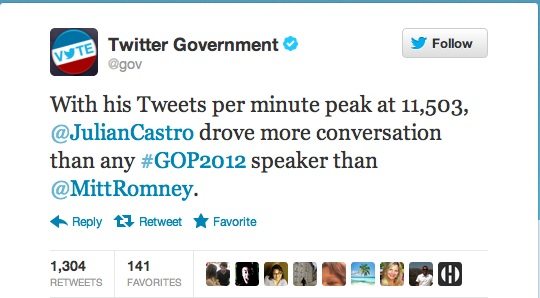 2. Facts Matter As Well: Yes, we know that Castro hit it out the park via the online buzz that he got last night. But as with any politician, there is buzz and then there are facts. USA Today ran a fact check about what Castro had to say. Here is just one tidbit:

Keynote speaker Castro also put a misleading spin on employment data. He claimed “we’ve seen 4.5 million new jobs” under President Obama. In fact, the nation has regained 4.5 million jobs that had been lost, but employment is still below where it was when the president took office.

Castro: Four years ago, America stood on the brink of a depression. Despite incredible odds and united Republican opposition, our president took action. And now we’ve seen 4.5 million new jobs.

Although he didn’t say so, Castro is referring only to private-sector jobs — which have fared better than government jobs — and he is using February 2010 as the starting point, because that was the low point for private-sector jobs. There were 106,773,000 jobs then, and the number has been rising ever since. In July, there were 111,317,000 private-sector jobs, according to the Bureau of Labor Statistics. That’s an increase of 4,544,000.

The picture changes dramatically, however, when starting from the beginning of Obama’s presidency. Between January 2009 and the most recently reported figures, there has been a net increase of just 332,000 private-sector jobs.

Moreover, if you include all jobs — including the hard-hit government job sector — there remains a net decrease of 316,000 jobs since the start of Obama’s presidency. Total employment has gained about 4 million since February 2010, not 4.5 million. It’s all in how you slice the data.

Sidenote: it is ironic that this fact check is lamenting the fact that there has been a decrease of public section jobs (reducing big government, anyone?), but still, Castro stretched the truth. Wow, a politician fudged facts! What a shocker.

3. Rubio Is No Castro: I just HAD to use that bullet headline since most of Rubio’s supporters would tend to agree with it, at least when comparing the Florida senator to the two brothers who are in charge of Cuba. However, as is typical of the divisiveness that has become our political system, the moment Julián Castro’s line “”My mother fought hard for civil rights, so instead of a mop, I could hold this microphone.” 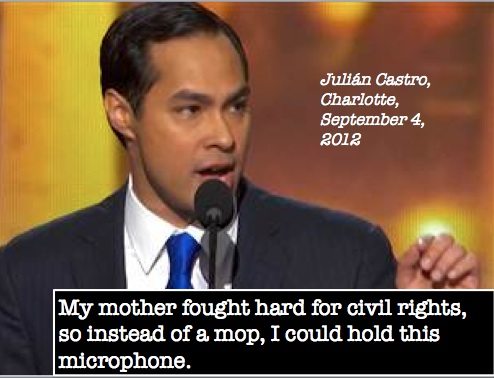 Within minutes, the conservative page Twitchy was asking whether Castro had borrowed a line from Rubio, who said last week in Tampa: “A few years ago, I noticed a bartender behind the portable bar in the back of the ballroom. I remembered my father, who worked as many years as a banquet bartender. He was grateful for the work he had, but that’s not like he wanted for us. You see, he stood behind the [bar] all those years so that one day I could stand behind a podium, in the front of a room.”

Now, I am not saying that Senator Rubio’s background and personal story do not matter, just that Castro delivered his story with a little more alma. As for the whole allegations that Rubio’s phrase was borrowed by Castro, here is what is wrong with that:

4. Castro Could Have Shown More Courage: Yes, Castro achieved a lot last night, and there is no doubt that he has a future on the national stage. But his biggest problem was that many will still see him as just another Latino speaking to the generic bullet points of the Democratic Party. While Castro praised his mom for being a strong Chicana activist and said that Congress must past the Dream Act, just hours before Castro spoke, a group of undocumented people were arrested in front of the DNC for protesting President Obama’s immigration and deportation policies. Real courage would have been Castro standing with those who still believe that the Obama administration had indeed broken a campaign promise in 2008 that still leaves a bitter taste with many voters. In the end, Castro can make many feel proud, but to not acknowledge the elephant in the room (no pun intended) lowered his star down a notch. 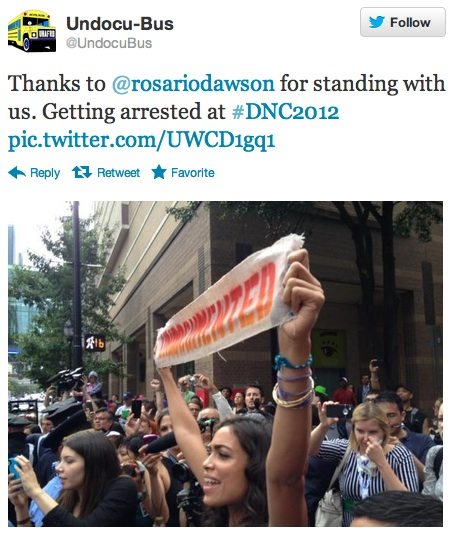 5. The Mainstream Media Is Beyond Awful When It Comes to Latino Politics: This is kind of an extension of my third Big Picture Idea, but since I had too much to share about this, I created another category. As is typical of the mainstream media, now everyone is becoming an expert on Latino politics and the new trend is to turn Latino politics into an ethnic UFC brawl between the Cuban American Rubio in one corner and the Mexican American Castro in another corner. (See point 3, since I even fall into the trap when discussing what Twitchy did.)

The politics of division between Latinos can be a bit risky, and mainstream media outlets should be a bit more responsible. One headline from Fox News Latino read Julian Castro VS Marco Rubio, Mexicans VS Cubans, a Political Fight for the Ages, with the The Washington Post also weighing in and running the same Associated Press story that FNL ran. Here is a snippet  of what the AP piece said:

Moises Venegas, a retired Mexican-American educator and Latino community activist in Albuquerque, N.M., said the two groups have little in common besides an historical connection to Spain, and Spanish surnames.

“The Cubans have never been one of us,” Venegas said. “They didn’t come from Chihuahua or Sonora in Mexico and from poor backgrounds. They came from affluent backgrounds and have a different perspective. The Republican Party also has opened doors just for them.”

Pedro Roig, a Cuban-American attorney and senior researcher at the Institute for Cuban and Cuban-American Studies in Miami, disputed the notion that there is significant rivalry between the groups. He attributes divisions between Cuban- and Mexican-Americans in part to geography and noted that many in the Cuban community admire Castro’s selection as the Democrats’ keynote speaker.

“Sometimes Cuban-Americans, we have created an enclave in the area of South Florida, which is much more limited than the Mexican settlement in the United States,” Roig said.

Granted, this AP story is trying to drive a typical “either/or” wedge between different groups, and even though the reporter finally acknowledges in the last paragraph of his story that the divisions between Mexican Americans and Cuban Americans are dissipating, the damage was already done. The mainstream media will continue to buy into the fact that there is this lingering and intense hatred between these groups and now there will be a Rubio vs. Castro feel to it.

The sensationalism of the headlines and idea that this wedge issue still lingers ignore the fact that social networks are beginning to unite many more Latino voices in this country. There is a slow yet growing movement that speaks to unifying themes that bring US Latinos together. Critics will still say that everyone still solely identifies with ones’ country of origin, but when our page gets comments such as the following, I know better times are ahead of us and this Rubio/Castro fake fight is just silly:

“We must be vigilante to not be divided by this type of bs. Unreal.”

“I dont care if they come from mexican or cuban background, they are still LATINOS. I want you to care about what we can do for our community.”

“The headline is awful, but let’s be fair. Very frequently I hear non-Mexican Latinos bemoan the fact that they are taken for Mexican in the US. There are differences and division that have nothing to do with something being imposed, but rather the historical and cultural realities of each Spanish speaking country. The issue is whether Latinos can come together and build a grass-roots collective voting block to have more power than any group would have alone, or if the Latino vote will be wooed and used by others for political gain.”

“It’s dumb and divisive. Wasn’t too long ago that we would hear “the irish”, “those polish”…”

“I don’t think they are missing anything……just another ploy to create more division. Nada mas.”

What IS true is that Castro’s Mexican American background did resonate with more people with similar backgrounds, because in the end, the numbers don’t lie. However, to now pit this as a battle of different groups is pretty insulting. I know Cuban Americans who admire Castro, and I know Mexican Americans who admire Rubio. I know many Cuban Americans who came from “poor backgrounds” and I know Mexican Americans who came from affluent backgrounds. I know Puerto Ricans, Colombians, Salvadorans, Hondurans, Dominicans, Peruvians, and so many other other “ans” that think we should be more unified and celebrate our commonalities. The AP story truly does a disservice to the complexity of the elusive, hard-to-define US Latino vote. Politically, I don’t agree 100% with Rubio nor do I agree 100% with Castro, but I do think that having different voices with different points of view is what we should strive for in our political system.

So we should get beyond this “analysis” that pits Latinos against Latinos. There will never be strength in numbers if this type of “news” gets accepted by the mainstream.

But maybe it is too late, since my last Big Picture thought about last night’s speech is all about Chris Matthews, whose patronizing views of “Latinos and Latinas” was so off-the-mark and so nonsensical, you are just left to wonder why didn MSNBC try to diversify its roundtable discussion last night? This is what Matthews had to say:

On the night where some history was made, Matthews basically spewed thoughts that, quite frankly, just didn’t have to be said. US Latinos do not need to be patronized, they need to be heard and they will demand the politicians and the media hear them.

Julio (Julito) Ricardo Varela (@julito77 on Twitter) founded LatinoRebels.com (part of Latino Rebels, LLC) in May, 2011 and proceeded to open it up to about 20 like-minded Rebeldes. His personal blog, juliorvarela.com, has been active since 2008 and is widely read in Puerto Rico and beyond. He will pen a weekly column on LR each week. Recently, Julito represented the Rebeldes on CBS’ Face the Nation, NPR, and The New York Times.