#BoicotLaComay Is Not Censorship: How Social Media Is Transforming Traditional Media

In the Internet age, it is a word that is tossed about a lot and mostly misinterpreted. To give this column some context, let's actually read from the United States Constitution: "Congress shall make no law respecting an establishment of religion, or prohibiting the free exercise thereof; or abridging the freedom of speech, or of the press; or the right of the people peaceably to assemble, and to petition the Government for a redress of grievances."

In essence, free speech is all about freedom from government restraint and intervention. If we believe in free speech and freedom of expression, we must be able to allow for that speech and express—no matter how hateful—to occur. The government cannot limit it. However, that does not mean, we cannot expose and speak out against those hateful words. So if I disagree with your hateful speech, Adam Carolla, about your dumb anti-Mexican rant, I am expressing my freedom to tell you #Nomames while at the same time defending your right to say it. If, however, the US government or any government, didn't allow for me to tell Carolla to suck it, then I would be censored. That is what happened to me when an elected official once censored me for offering an opinion about his politics. It was the office of an elected government official which prevented me from expressing my opinions, and it was censorship.

At the same time, as the founder of a private media company, I have every right to block people from this page if they abuse our policies. That is not censorship since we are not a government. Also, people have every right to tell us to go to hell and call us all the names in the book. We are fully aware of it.

So, let me be clear and I will say it again if I need to: what is going on right now with #BoicotLaComay is NOT censorship. It is NOT a denial of someone's freedom of expression. In fact, I would argue that it is the most telling example of what freedom really is. In other words, #BoicotLaComay is all about freedom of expression, and you can thank social media for that.

Before I answer all the critics who just have it absolutely wrong and why I think the boycott is a great example of freedom, let us put the recent boycott movement in its proper perspective: a person formed a Facebook page on Tuesday after the character of La Comay (a puppet, people, it's a puppet!) just crossed the line one last time with incredibly inappropriate and uncorroborated opinions (yes, opinions, and not facts) about the brutal, inhumane death of publicist José Enrique Gómez. Those opinions were unethically portrayed within the context of "journalism." It was classic Comay. And she was finally caught. People had had enough with all that was going on in Puerto Rico, and La Comay became the symbol of all that anger and desire for true change in Puerto Rico.

It was the tipping point.

In just five days, the social media movement grew (it actualy now has more fans on Facebook in five days than the official "SuperXClusivo" Facebook page), and major sponsors pulled out from the show. It was estimated that WAPA-TV, the show's network, would lose $1.3 million in revenue a week. 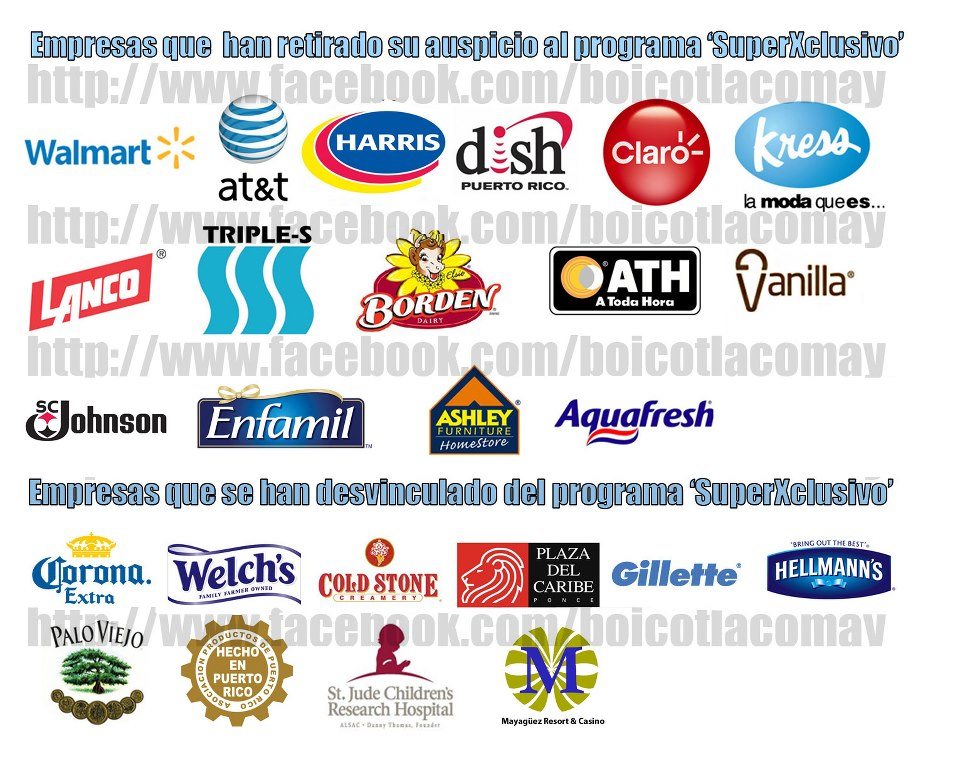 Think about how dramatic this is for the network. On Tuesday, you have the #1-rated show in Puerto Rico, earning millions and millions for the network and the show's host, Kobbo Santarrosa. You basically ignore the social media reaction and treat it with traditional public relations and crocodile tear apologies. By Friday, a majority of your advertisers walk away from the show, you are bleeding money, and the movement continues. Can anyone recall a show in the history of television where such a dramatic shift occurred? In any market?

All because of social media. And for the traditionalists, the movement hit them like a ton of bricks.

Take, for example, the famous Luis Francisco Ojeda, 71, who defended "SuperXclusivo" and said that the show is an example of freedom of expression, calling the boycott "irresponsible."

Here is where Ojeda and all the Comay defenders got wrong. Social media has flattened the relationship between product and consumer. Anyone who can tweet, post a picture, share a status update, has the same power and influence as Ojeda, WAPA-TV, the rest of the Puerto Rican media, Santarrosa, and a silly homophonic and mean-spirited puppet character.

You see, traditional media used to be one-way. If someone had a complaint, it would be a phone call or a letter to the editor. The letter might get published, the call might be addressed, or the person who complained might have been given an appearance. After a few days, it would all go away, and the traditional media would still be in control.

That model is dead.

Now, everyone is equal. I will repeat it again: everyone is equal. You are one opinion from no longer being relevant. WAPA's and La Comay's mistake is that they didn't take the original boycott movement seriously on Wednesday when they still had a chance to stop the momentum. Instead, they belittled the criticism and didn't respond to it quickly enough. They fought social media momentum with traditional media tactics. And that strategy never works these days.

I am absolutely convinced that if the show did something dramatic on Wednesday (like vowing to NEVER ever report something without REAL FACTS, to stop refraining from the toxic atmosphere it creates, or by dramatically altering its editorial direction), it would have survived the last few days and the lost sponsors. Instead, the egos got in the way and they dug their heels. Bad move. 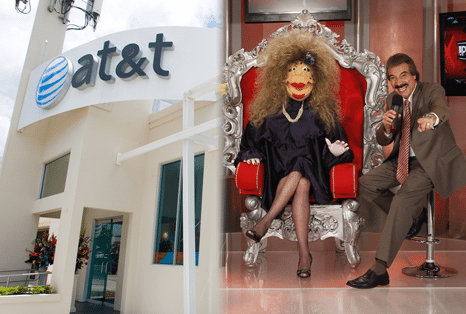 That is what you have defenders like Ojeda talking scared about what is next. That is why you have Comay supporters calling this whole thing silly and emotional. Instead of acknowledging the fact that something rather dramatic and yes, historic, happened this week in Puerto Rico, the critics dig their heels even deeper and believe that their ways are better than social media.

That is the biggest mistake they are making.

What has this new freedom of expression movement caused in a week that years of traditional media could not achieve in Puerto Rico?

It woke people up, it gave them a cause, it gave them inspiration, and there is now a real and authentic belief that positive change can happen in Puerto Rico if the speech that dominates the airwaves was love, and not the toxic garbage that comes on every day at 5:55 pm and contaminates all that is beautiful about the island. 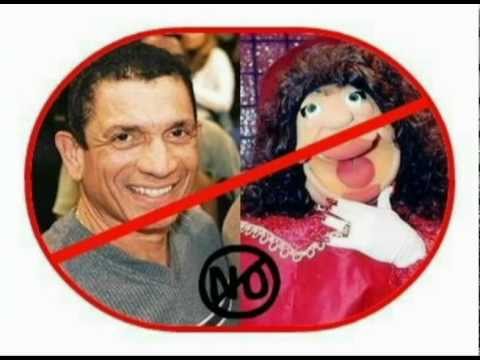 Now, La Comay and WAPA can cry foul all they want, but how do they address the karma that smacked them down? If you keep playing with the controversy fire, eventually you will get burned if you do it unethically and without true consideration of the damage that you cause people. The economic model that WAPA has set up with its consumers is crumbling. That is called the free market, and just like WAPA has the right to broadcast its show and try to earn money from that broadcast, so too do viewers have the right to not view the show and for sponsors to not buy ads for the show. Such is the world of capitalism.

That has nothing to do with censorship and denial of freedom. No government is denying WAPA the right to broadcast the show. WAPA is a private company that has only one goal in mind; MAKE MONEY. And their little racehorse puppet will no longer be raking in the millions they have gotten from it. But still, WAPA can put the show online in some corner of the web and sell it to subscribers if it wants to keep earning money from the show. Nonetheless, the traditional broadcast model for La Comay is slowly imploding.

And it didn't need people marching in the streets or stomping on the doors of the station. All it needed was a group of people who could freely express their opinions behind computer screen, smart phones, and tablets to take action in a format that so many people still don't fully comprehend. This is what social media can do, and the doubters can continue to doubt it, because those who embrace the new ways will thrive as the old ways crumble right before our eyes.

Julio (Julito) Ricardo Varela (@julito77 on Twitter) founded LatinoRebels.com (part of Latino Rebels, LLC) in May, 2011 and proceeded to open it up to about 20 like-minded Rebeldes. His personal blog, juliorvarela.com, has been active since 2008 and is widely read in Puerto Rico and beyond. He is also a weekly contributor to NBC Latino. Recently, Julito represented the Rebeldes on CBS' Face the Nation, NPR, and The New York Times.

2 responses to “#BoicotLaComay Is Not Censorship: How Social Media Is Transforming Traditional Media”