This morning I was contacted by Colombia’s W Radio to make a live appearance on its morning show. The topic? A piece the Rebels wrote about the “Fulgencio” episode which aired last week on ABC’s “Modern Family.” 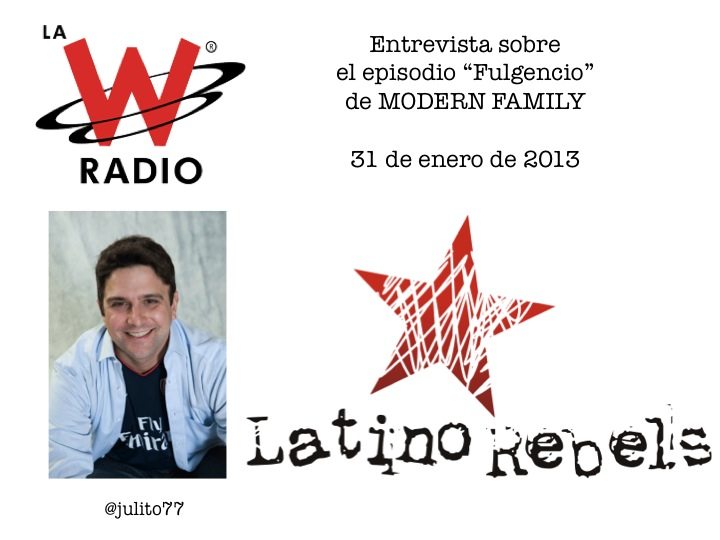 I said yes, and within five minutes of agreeing to talk, the show had me on live to discuss the issue. From the very beginning, it was obvious that the show’s host was trying to let Colombia know that I was “offended” by Sofia Vergara. He was so unprepared. Quite frankly, it caught me off guard, but I plowed through. Here is the interview in Spanish.

For those who need an English synopsis of the segment, after clarifying that our page’s post (written as an editorial by our group) was not some attack on Vergara or “Modern Family,” but instead a critique of the “Fulgencio” episode, I took a breath and did my best to state my case. I did find it quite funny that the show’s co-hosts didn’t even read the original piece or even saw the episode in question.

I also tried to make the case that the “Fulgencio” episode crossed the line in portraying Colombian characters in a negative light, with jokes about giving guns as baptism gifts and asking where the river was to do the laundry. The episode speaks to a bigger issue of how many in the U.S. entertainment industry continue to perpetuate negative stereotypes of Latinos in mass media. Self-deprecating humor (you go, Al Madrigal!) is one thing, bad stereotypical humor when there are very few opportunities to balance out the episodes like “Fulgencio” are not.

By the way, I felt the host wanted to trap me into saying something that we didn’t write in this episode. “Modern Family” chose to turn Vergara’s character into a Charo-like persona that is stale and lame. I know so many of my friends who don’t even watch the show because of it. If a major show like “Modern Family” misses the mark, then I have no problem saying it. And by the way, I am not the only person making this observation.

The episode was disappointing but if the W Radio hosts think that this is good for U.S. TV, I really don’t care. I will continue to ask networks to offer a greater variety of programming that tries to dig deeper into showing more positive images of Latino characters. “Modern Family” failed with the “Fulgencio” episode, and our group already stated our reasons. Sorry, W Radio, if you don’t agree. You can promote the stereotypes and we will try to change the paradigm. Just don’t put words into my mouth minutes in a live interview. And next time, watch the episode and do some more homework about what the group wrote. This is not about “offense.” This is about saying that networks should get a clue about when they don’t get it right.

Julio (Julito) Ricardo Varela (@julito77 on Twitter) founded LatinoRebels.com (part of Latino Rebels, LLC) in May, 2011 and proceeded to open it up to about 20 like-minded Rebeldes. His personal blog, juliorvarela.com, has been active since 2008 and is widely read in Puerto Rico and beyond. He is also a weekly contributor to NBC Latino. Recently, Julito represented the Rebeldes on CBS’ Face the Nation, NPR, and The New York Times.

One response to “VIDEO: My Bizarre Live Appearance on Colombian Radio About “Modern Family””