Querido Hollywood: A Latina Rebel’s Review of “Bless Me, Última”

This is a review submitted by Rebelde Claudia Serrano. Yeah, she loved the movie. For showtimes, visit the official page of “Bless Me, Última.”

This film, “Bless Me, Ultima” is love letter for our Mexican-American fathers. Similar to the love letters Linda Ronstadt shared with “Canciones de mi padre,” you can rename this movie “Cuentos de mi padre.” This film, based on the literary classic by Rudolfo Anaya, tells our stories: about young boys from years ago sharing their experiences with the curanderas who healed their physical ailments and wounds when the doctors couldn’t; bruja curses; town chisme; the good-hearted town borracho; the PTSD-ridden sons of war; the anxiety that rained on families waiting to hear news of another soldier’s death; being torn between the cultures and legacies of parents; going on treks to pick the natural cures derived from the earth; honoring one’s elders; questioning religious dogma so intertwined with cultura; the travieso episodes of youth; the dilemma of a young man traveling away from his own beginnings to start his own life or stay back and live the one his family guilts him to live; and on and on and on. 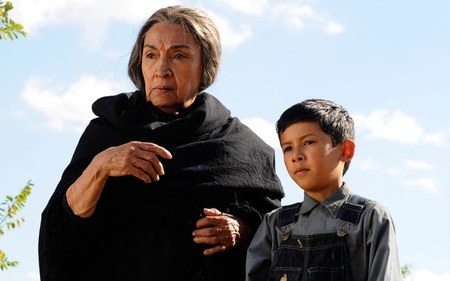 Even if you are not of Mexican descent, the stories within this film will still touch you. The message is universal. What do Tenorio and his bruja daughters represent? What exactly does the death of Florence reveal? What is the meaning of the hairball that Tío Lucas coughs up after the curse is lifted by the ceremony and healing performed by Última? What are the lessons that we all can learn from the wisdom of Ultima gives Antonio throughout the movie? Is it caring for the earth that feeds us? Or maybe that we all need to honor the Últimas that may be in our lives because we are too self-consumed to recognize that? Or is it not forsaking those who gave to us and standing up for them when they need our help? Or is it listening to the stories the elders in our own families tell us so we may hear the lessons in them?

Without reading the book first, watching “Bless Me, Ultima” was overwhelming and intense, but confusingly contradictory, like being enveloped by a warm blanket of nostalgic déjà vu yet at the same time never feeling that way before as a moviegoer. On a more personal level, I can attribute much of this intensity to the experience of growing up as the child of a prolific storyteller, a first-born U.S. citizen father raised in a border town by a Mexican immigrant single mother and traces of parenting by his deadbeat immigrant father. The main character, Antonio, was 6 years old the summer of 1944 in the movie just as my father turned 7 yrs old the August of that same year. Seeing many of his nearly identical stories on film was a beautiful experience that left a lump in my throat for a couple of days. But for others, this could be their fathers, or tíos, or grandfathers, whose stories are being told for the first time.

“Bless Me, Última” blessed us with the opportunity to relive these experiences as a viewer. Querido Hollywood, please bless us with more stories like these. It’s time, and your survival depends engaging the New American demographic.

This film was crafted with love, respect, and honor. Follow this lead, Hollywood, and we will come in droves to spend our hard-earned cash to witness our Latino-American literature adapted for the screen in celebration of our American cultura that we share with everyone.