Chola: That’s Who I Am 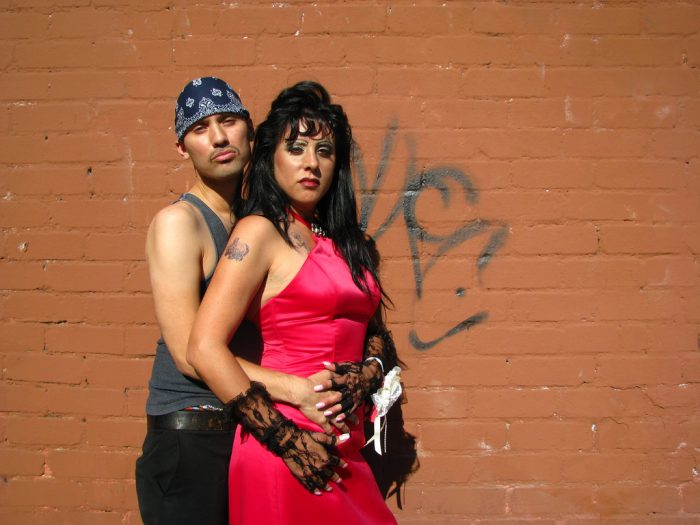 At times individuals possess a deep compulsion that forces them to stand firm to their convictions even though those around deride and vilify them. Life can become a continuous struggle to retain the essence of who you are while the rest of society insists you conform to a set of norms that dictate your behavior, attitude and desires. Cholas have always presented what I term a beautiful contradiction—women who have always strived to possess a femininity that is traditional and steeped within Mexican-American culture and one that can be seen as progressive and abrasive at the same time. Cholas are often spoken about as a sub-culture that in today’s society is both maligned and mined for aspects of its style but they are much more. Cholas are young women who like their pachuca forebears have been able to carve out an identity deeply rooted in culture and customs as a means of maintaining their Mexican-American identity in the face of persecution and oppression.

For me, being a chola was tied up with the gangs of East Los Angeles, I considered it an L.A. thing and I think that was probably true for a lot of people. When I left my late teens and entered my twenties, I began seeing representations of cholas in hip-hop videos and films, at that time I couldn’t put a name to it but I recognized it. I became familiar with the nuances of chola style and realized that being a chola meant that you ascribed to a certain dress code and behavior that was deeply misunderstood. I later came to understand that the representations I had been continuously witnessing in countless videos, images and films was that of the chola. Being a chola is more than dressing or speaking in a particular way, it is to possess a history and legacy that speaks of young women who adopted an identity as a means of survival and cultural preservation. 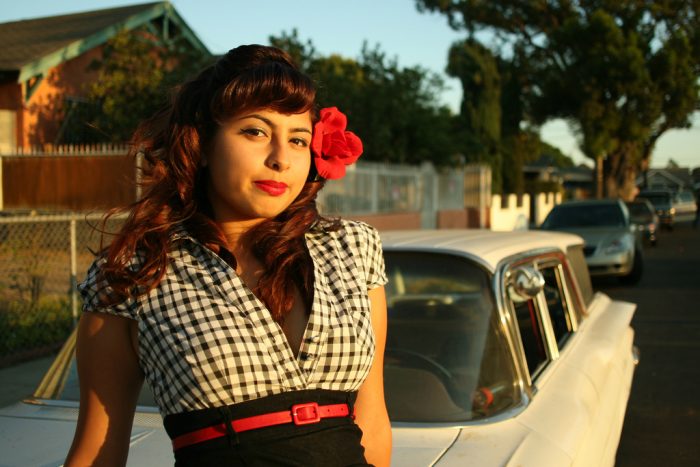 Google describes a chola as a Latin American woman with American Indian blood. In a Guardian.com article on chola style as cultural appropriation, Julianne Escobedo Shepherd describes the concept of “chola” as always being more than a look. She speaks of it as part of her “inherited and ancestral culture,” noting that the term was historically used by European colonizers to refer to full or mixed indigenous populations in South and Central America. Escobedo Shepherd further says that the term was reclaimed in the 1960s by US working-class Mexican-Americans and the Chicano Power Movement as a way to “flip and empower a term that had historically been used to denigrate…” Cholas are ladies that physically look very distinctive and their style has always consisted of rituals that include dark lined lips, thin pencilled eyebrows; gelled ‘baby hairs;’ a devotion to Aquanet hairspray; “Dickies’” or khaki trousers along with Nike sneakers. These rituals uncover a deep desire to preserve a culture under threat from dominant U.S. culture. Oakland-based modern-day chola and model Mayra Ramirez, known as Hellabreezy, states that ‘the chola, the female counterpart of the cholo, was a “working-class, young Mexican American female from the barrios of the southwest with a distinct aesthetic, style and attitude.”

Cholas are females who have fought hard to be themselves, to be women who control the narrative of which they are a part. I appreciate the need cholas have always harbored to be heard and accepted on their terms. Cholas have always been a dichotomy, comfortable in the public and private sphere, deciding to be at once feminine and on the one hand and fierce and uncompromising on the other. The essence of chola style is the feminization of masculine style, mixing the softness of the feminine with the toughness of the homeboy. Cholas bought what they could with the little they had, as many were the daughters of undocumented farm-workers who were themselves exploited, fighting in 1965 for a mere $1.25 hourly wage, so expensive brands were not part of the style. The chola aesthetic that we know today that is tied up with low-rider culture, intricate tattoos and gang-signs developed as a way of survival. Maintaining this aspect of Mexican-American culture is to maintain a femininity that refuses to conform or be tied to common-sense notions of what it means to be female.

I understand the need cholas have always had to control the way they are perceived. ‘True cholas’ represent for real and aren’t afraid of this fact. What drew me to these ladies was how complicated and multi-faceted they were. They would sport immaculate hairstyles and long manicured nails whilst flashing gang-signs and wearing flannel shirts. Cholas took a glossy type of glamour and made it a part of street life. But once you dug deeper, you found that cholas were not simply nihilistic. They were resisting for a reason. 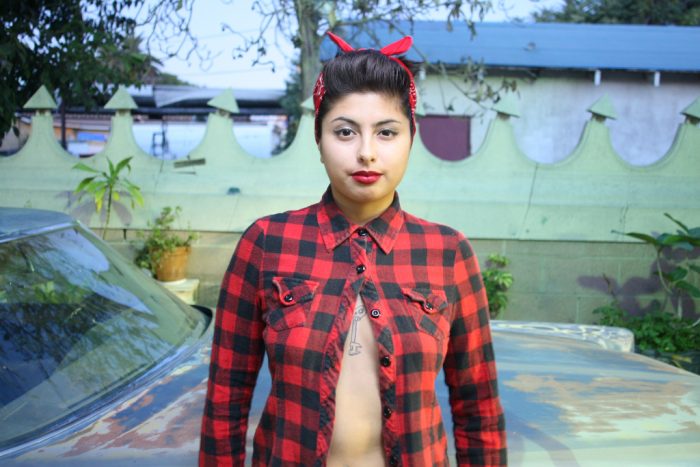 To understand chola culture and its significance is to understand the history of systematic oppression and discrimination that has plagued Latino communities in the United States. In the period between 1929 and 1944, the U.S. government forcibly removed around two million people of Mexican heritage from the country-more than 1.2 million of them United States citizens. People were snatched from their homes and workplaces and illegally deported in a shameful incident known as Mexican Repatriation. Between 1951 and 1961, the 300-plus acres of land known as the Chavez Ravine, owned by generations of Mexican-Americans, was slowly stolen by the Los Angeles City Housing Authority. Residents were forced to sell their land and their houses burned as practice sites for the LA fire department. Many felt there was a definite need to forge identities that refused to conform to the requirements of an oppressive system.

Pachucas and their male counterpart pachucos emerged on the streets of Los Angeles during the time of Mexican Repatriation and World War II. Pachucos wore zoot suits with high-waisted pegged pants and long suit coats. Pachucas were nonconformists and their own style consisted of teased bouffant beehive hair styles, heavy make-up, tight sweaters and slacks or knee-length skirts that were immodestly short for the time. Pachucas were known as a rebel subculture that rejected assimilation into the white, hyper-patriotic spirit of WWII. They rejected mainstream beauty ideals preferring those that would challenge them. In 1943, citywide brawls known as The Zoot Suit Riots, took place across Los Angeles and Southern California as white military servicemen began attacking pachucos, who were deemed unpatriotic due to the extra fabric needed to make their clothing and deviant because of their racial difference. Pachucas suffered physical and sexual violence during the riots but the attacks could not repress pachuco culture. Pachuca culture was predominantly about asserting a non-white alternative that put Mexican-American needs at its fore.

The chola identity was and still is resistant to dominant notions of femininity. During the 1960s and 1970s, cholas were refusing to be confined to a domesticity that restricted them to the home. Cholas believed that they could aspire to be wives and mothers but also be a part of the street culture of the barrio and kick it with their cholos. The gang violence that became a part of the cholo/chola culture was not confined to males; many females accepted this aspect of being a chola and were happy to live this life. There are vast arrays of images of cholas through the years that depict ladies who are unwilling to compromise about who they want to be and how they want the world to view them. They were different in the way they looked but were beautiful. The chola identity is subversive in that it seeks to undermine the forces that have sought to destroy it by preserving a lifestyle, dress and codes that have prevailed for decades. The chola’s glamour and accentuation of her beauty cleverly masks her intent to be accepted in both the female and male sphere and to disrupt the status quo. Cholas, along with their pachuca forerunners, are women who changed the way women perceived themselves within the Latino community within the United States and further afield.

For many cholas, “mi vida loca” is very real and the three dots many wear under their right eye when applying make-up signifies this. The “teardrop,” often worn under the left eye, denotes the loss of loved ones to gang violence or physical or sexual violence in prison. Many can attest to the loss associated with the lifestyle and how complicated a life it is. For some there is a preoccupation with being beautiful and as bad as they want to be.

As the chola lifestyle becomes more mainstream and at times appropriated simply for street credibility, modern-day cholas and Latina YouTubers are producing make-up and style tutorials that are respectful of chola culture and identity. There remains a deep sense of pride amongst new generations. I can identify with the need to pass on chola culture and to inform wider society about its historical significance and importance to Mexican-Americans and aspects of their struggle.

Being a chola was always more than style, the way you looked, or about living a reckless, violent life. It was asserting the right to be a young woman who was feminine, beautifully adorned, sensual, challenging, independent and free-thinking. It was about being complicated and having a complex mindset. It was about being proud of the things society deemed problematic and in many instances deviant. In the chola I see fragility, tragedy and strength. I see a beautiful contradiction and females who were never afraid to be cholas.

Wendy Hackshaw is a writer from London who is currently researching late-1970s New York City and the cultural and social movements that came out of that period. Her work focuses on revolutionary aspects of style, music and culture. You can follow her @deeshimmer.