On March 27, the national news media confirmed that Arizona senator John McCain (R) was live-tweeting the news of a woman who had scaled an 18-foot border fence in Nogales, AZ in the middle of the day, just yards away from four U.S. senators and a U.S. Border Patrol station. FOX News reported the following: “It may or may not have been the first time an attempted illegal border crossing was live-tweeted.”

Other outlets, such as POLITICO, ABC News, and The Associated Press all covered the border crossing incident and credited McCain’s Twitter profile for sharing the news, but no one asked very basic questions: Was Sen. McCain sharing the information in real-time or was it information that was shared later, after the fact? And was that really McCain who was tweeting the information? Who was the woman who scaled the fence, and what happened to her?

Latino Rebels has already raised several questions about @SenJohnMcain’s tweets and reasons why we think the entire event was a staged “bag job.” After exchanging emails with the U.S. Border Patrol about the March 27 events, we still think that these very basic questions have yet to be answered.

Crystal Amarillas, the Border Patrol’s Public Information Office for the Tucson Sector Communications Division, confirmed that the apprehension of a woman who had illegally entered “the U.S. at the border east of Nelson Street in Nogales, Arizona” occurred at “approximately 10:55 am” local time.

Yet a simple check of McCain’s profile and tweets from March 27 about the woman’s fence-climbing success confirm that the Senator’s profile did not share the news of the crossing until after the fact. If you examine the @SenJohnMcain tweets and check the time when the tweets were published using the local Arizona time option on Twitter, the tweets indicate that they were published at least an hour after the woman was picked up by Border Patrol agents. They were not live-tweeted.

According to the U.S. Border Patrol, the woman was apprehended at 10:55 am local Nogales time. McCain’s Twitter profile tweeted the following tweet at 11:51 am local Arizona time. 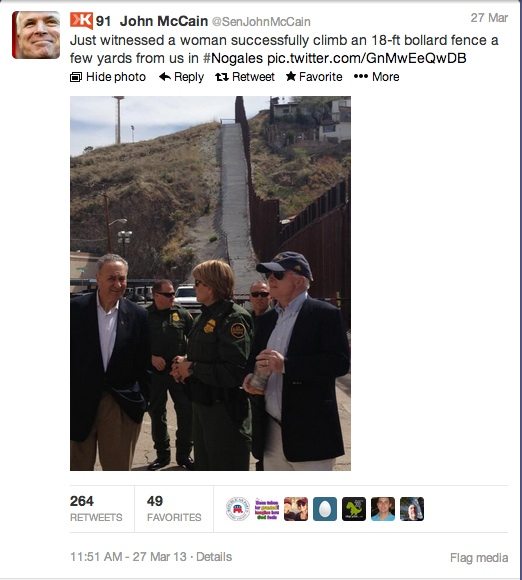 Two minutes later after the first McCain tweet, the following tweet was posted at 11:53 am Arizona time: 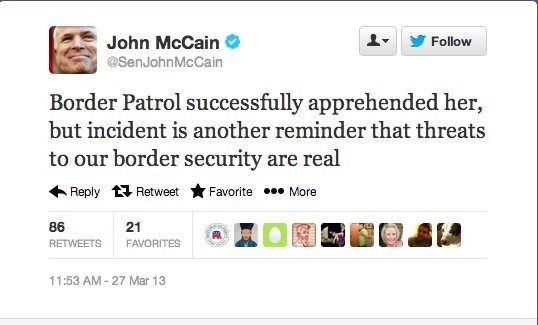 Such a sequence suggests that the event that McCain’s Twitter profile advertised as a being real-time occurrence (“just witnessed”) was actually not, and the tweets that were published happened way after the incident.

Amarillas also emailed us the following information when we made our initial request:

I can confirm a female Mexican citizen was apprehended Wednesday for illegally entering the U.S. at the border east of Nelson Street in Nogales, Arizona. The apprehension was witnessed by Senators McCain, Flake, Schumer and Bennet as they were getting briefings and tours of CBP operations in Arizona.

The woman is no longer in our custody and was repatriated back to her country of origin.

A similar response was given to POLITICO when Brent Cagan of the Tucson sector of the Border Patrol said: “A female Mexican citizen was apprehended today for illegally entering the U.S.. The apprehension was witnessed by Senators McCain, Flake, Schumer and Bennet as they were getting briefings and tours of [Customs and Border Protection] operations in Arizona.”

When we followed up for details about the woman’s name and what actually happened, Amarillas emailed us this reply:

The female was apprehended a short time after she jumped the fence on the eastside of Nogales, Arizona. Due to the Privacy Act I cannot disclose the name of any detainee who is or was in our custody.

It was at this point when we asked at what time was the woman apprehended, and only then did Amarillas share the time of the apprehension. Since that last exchange, the U.S. Border Patrol has not shared any additional information about this incident, even though we have additional questions. Our next step is to file a Freedom of Information request on Monday for the apprehension report and to also contact Sen. McCain’s office to ask about when the tweets were actually posted and who posted them.

Meanwhile, we still believe that McCain did not post any of the March 27 tweets himself. How could he, unless he had a very good smart phone that could take such amazing panoramic pictures of himself? Here are two more examples from that day (time stamps are GMT):

Getting ready for aerial tour with CBP twitter.com/SenJohnMcCain/…

So our questions remain about this border tour and about what was shared. We still think that the narrative presented was all about additional funding for more border security and technology. And we are still waiting for that visual proof of the unnamed Mexican woman who scaled an 18-foot fence in the middle of the day in downtown Nogales. In front of four U.S. senators who were being escorted by several Border Patrol agents.