Here is what Florida Senator Marco Rubio issued this morning in response to the news that major progress has been made on a comprehensive immigration bill: 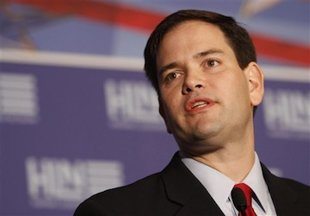 I’m encouraged by reports of an agreement between business groups and unions on the issue of guest workers. However, reports that the bipartisan group of eight senators have agreed on a legislative proposal are premature.

We have made substantial progress, and I believe we will be able to agree on a legislative proposal that modernizes our legal immigration system, improves border security and enforcement and allows those here illegally to earn the chance to one day apply for permanent residency contingent upon certain triggers being met. However, that legislation will only be a starting point.

We will need a healthy public debate that includes committee hearings and the opportunity for other senators to improve our legislation with their own amendments. Eight senators from seven states have worked on this bill to serve as a starting point for discussion about fixing our broken immigration system. But arriving at a final product will require it to be properly submitted for the American people’s consideration, through the other 92 senators from 43 states that weren’t part of this initial drafting process. In order to succeed, this process cannot be rushed or done in secret.

One response to “Rubio Statement: News of Gang of Eight’s Immigration Deal is “Premature””