Arrests Made at ICE Facility Protest in Phoenix

Here is what local Arizona television is reporting: 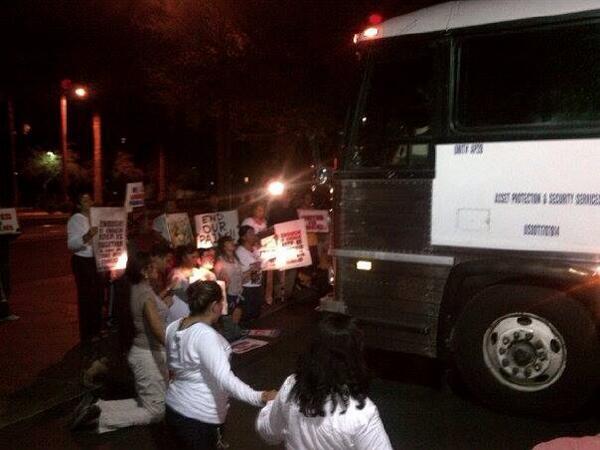 Four immigration activists chained themselves to a gated fence outside ICE headquarters in Phoenix Wednesday to spotlight what they call “the inhumane separation of families happening every day.”

It was part of a planned “call to action” triggered by leaders from the Arizona Dream Act Coalition, including DREAMers and undocumented mothers.

Police moved in, cut the chains and arrested the four activists who were part of a larger group bent on shutting down ICE operations at the agency’s Phoenix Field Office at 2035 N. Central Ave.

According to the coalition, Wednesday afternoon’s action was launched “to urge Congress to pass immigration reform that keeps families together, ends out-of-control enforcement and creates a real path to citizenship.”

Once we get more details, we will share. Here is a Storify showing images that were posted last night.

One response to “Arrests Made at ICE Facility Protest in Phoenix”