Earlier today, according to Facebook posts by both DreamACTivist.org and the National Immigrant Youth Alliance (NIYA), the office of Congressman Henry Cuellar indicated that the Texas Democrat would not support the plight of the #Dream30, a group of undocumented activists who this past Monday participated in a public border crossing in Laredo to call attention to record deportations by the Obama administration and the current inaction by Congress to pass immigration reform. As of tonight, 9 individuals in the group were released, while 26 others are still being detained. There was an expectation that Cuellar, who represents the city of Laredo, would support the group and speak for their release. However, it did not happen.

Tonight NIYA released the following press statement to the media:

NATIONAL—Four Dreamers have been released, along with their parents. Twenty-six Dreamers remain, who will be transferred to El Paso Processing Center. Assistant Field Office Director Ronald Warren can be reached for comment at (915) 225-1941.

Supporters of the protesters, including Calderon and Cortes, were escorted out of the office of Representative Henry Cuellar as they asked for his support in securing the release of the remaining detainees.

The NIYA Facebook page also posted this picture from Cuellar’s Texas office, saying the following, “Rep. U.S. Congressman Henry Cuellar (TX-28) had immigrant families, including 3 participants in #BringThemHome Laredo, escorted by police out of his office. These families have fought hard to be together. Why is Cuellar trying to split them up again?” 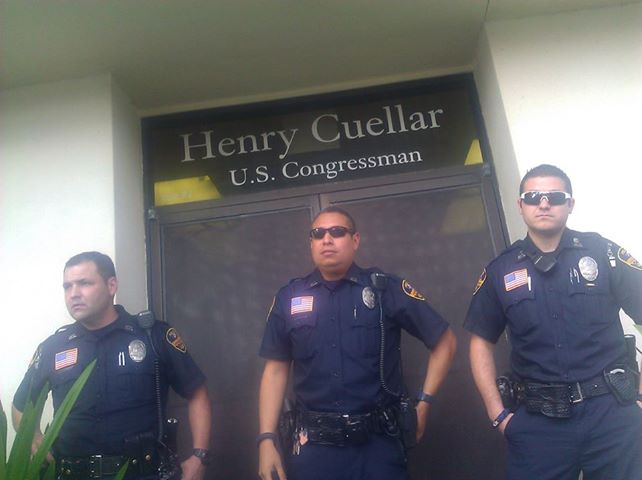 U.S. Congressman Henry Cuellar (TX-28)’s office came out yesterday saying they won’t support #Dream34 because they are being exploited by us, the organizers. What a low, shameful, position to take. These families have tried EVERYTHING to come home and yet we are exploiting them by bringing attention to their plight?

We are shocked. Worst yet, it seems Rep. Cuellar has been accepting campaign contributions from GEO Group, an immigration prison company, for a while now. Who is exploiting who?

The DreamActivist.org post also referred to political contributions made to Cuellar by the GEO Group, a private prison corporation that literally profits from the detention of undocumented immigrants.

According to one site that tracks recent political contributions, Cuellar received $10,000 from GEO Group last year. Another site lists a $14,000 figure. 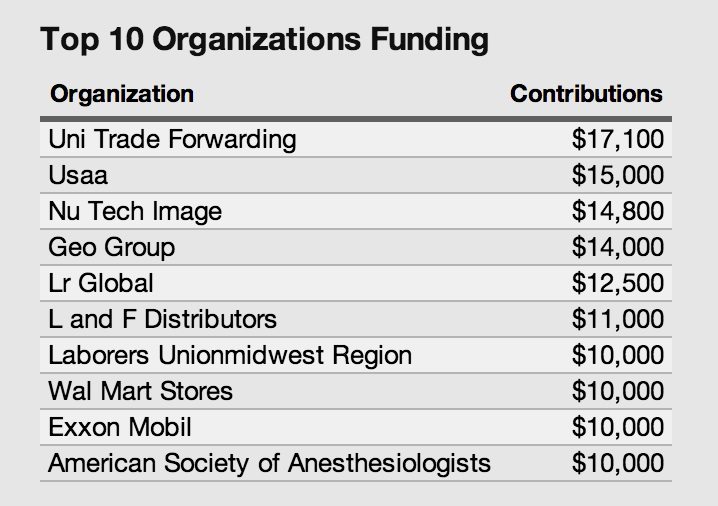 Attempts to reach Cuellar’s office were unsuccessful, but if we do connect with his office, we will share any comments.

Meanwhile, Cuellar wrote an op-ed a few weeks ago which he released on his official website. Here is an excerpt of what he wrote:

As the son of migrant workers and a first generation American, I understand the impact that immigrants can have on our country. My father was born in Mexico in Guerrero, Tamaulipas and only reached a third-grade level of schooling. My mother, though born in the United States, reached only the sixth grade. I am the oldest of eight children and still remember playing in the fields as a child while my parents picked crops. Now, after years of hard work and dedication to gaining a higher education, I am a United States congressman. Only in America is this story possible. And only in America are immigrants, like my father, welcomed and given the opportunity to change their circumstances.

3 responses to “Democratic Congressman Henry Cuellar Says No to #Dream30, But Yes to Private Prison Industry”

Leave a Reply to Opinion: The Dream 30, a congressman and private prisons Cancel reply