We don’t think we have ever written a headline with so many quotation marks, but after seeing a ‘damning’ (there go those quotes again) on the public Facebook page of LibertyNews.com’s Eric Odom, how could we not succumb to such ‘truth?’ Are you ready to see it yourself, with your own very eyes—15 seconds of pure anti-American hate? It’s no wonder that Odom and his preconditioned followers are just outraged.

You see that? Amazing, huh? Actual people in this country talking! Holding an American flag! Displaying a Mexican one! Commies!

And Odom is smart enough to know that publishing such a “shocking” video will get his followers angry, bad spelling at all! Here are just a few of the comments from these “American patriots:”

“They want Marshall law and everyone is falling for this! We should pursue our government to do there job and hold the commander in chief accountable for all this! #openyoureyes”

“Hispanic thugs and gangsters are what they are”

“Hit the road La Raza , take your bullshit & peddle it back to Mexico. & beyond.”

Then there is this ACTUAL CONVERSATION on Odom’s page: 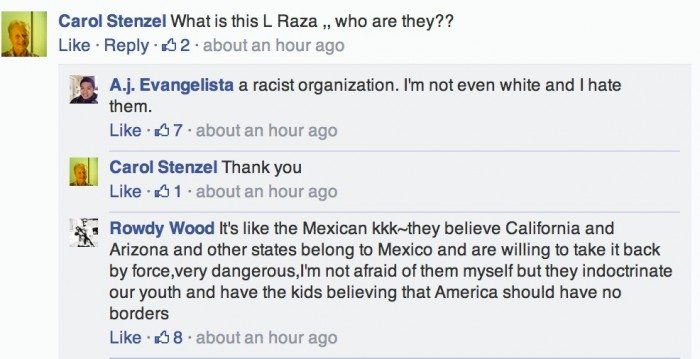 But what do you expect from Odom, who is sharing such amazing “hard-hitting” content from Murrieta. See what he posted earlier today?

“La Raza thugs just arrived in Murrieta.Told me they are here to protect the children.” 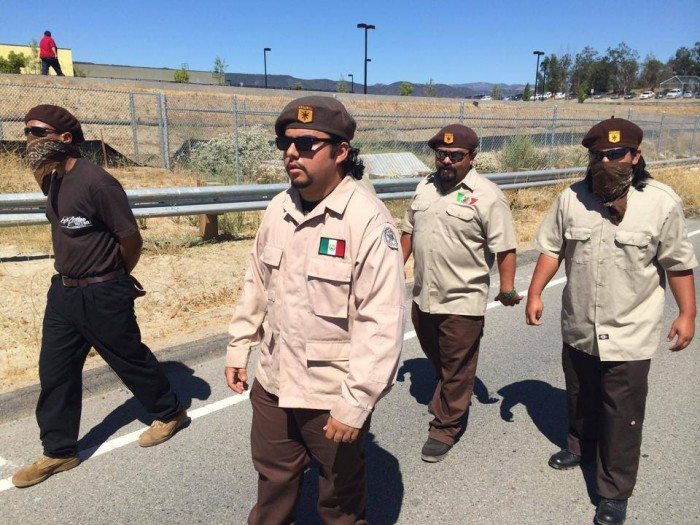 That image has gotten over 5,000 shares, but would Odom even take a moment to read the history of the group they represent and what they have accomplished?

Of course not, because when it comes to stoking up the flames of paranoia (oh no, Brown people! Mexican thugs! Thugs from El Salvador!) and racism (“Burn them like they did our flag!”), people like Odom thirst for that narrative.

This is what they do and they will do it because there are people in this country who are afraid, who will never want to learn about the causes of this entire mess, or that there are other REAL STORIES about Murrieta that they willfully ignore.

Like what Rick Najera wrote just a few days ago, or what Jorge Rivas wrote today about who is helping these undocumented families. We are also certain that Odom and his racist ignorants will never see the beauty of what happened yesterday in San Diego.

And we are definitely 100% certain that this group will never even bother to read another first-hand account we read today that paints a more accurate picture than Odom could ever manufacture. Yeah, this has basically come down to this: people who want to protecting children and families fleeing war-torn countries, and those who don’t.

Finally, if THIS is what one of the protests’ organizers who is running for City Council claims are “professional gang members,” then it’s clear to us that some parts of Murrieta have serious problems that will only harm this country instead of help it.

Here’s to the people in that “shocking” video who are showing up each day in Murrieta to support these refugees, yes, refugees.