While everyone is focusing on how Sofía Vergara is complicit during Monday’s Emmy sexist and racist fiasco, it’s about time we shift to address the real problem, a manipulative non-inclusive wealthy industry doling out abuse at the expense of a minority who cannot afford to compete on an equal platform. When so called “other” voices are drowned out abuses like these and worse are played out over national airwaves. They are unacceptable and should not be the norm.

During the show Television Academy chairman Bruce Rosenblum escorted Vergara, who portrayed the subservient exotic character, onto a rotating pedestal to be objectified as the audience focused on her body parts while he spoke in serious tone wearing an expensive over paid suit about how diverse the Academy is today.

How can this be considered satire when these are the only images presented to the world on a damaging consistent basis?  It is not satire, it is exploitation. Prejudiced jokes are not funny, they are harmful. The damaging effects of negative images has been well-documented through extensive research.

It was painfully awkward to see a woman oppressed by an industry on live national television. Victim of the system her only choices where to play along and be the buffoon, be seen and make some money because the industry doles out awards and throws millions to perpetuate negative stereotypes or simply refuse to perform. It is frustrating to watch this industry flaunt the abuse and infuriating to see the lack of empathy. 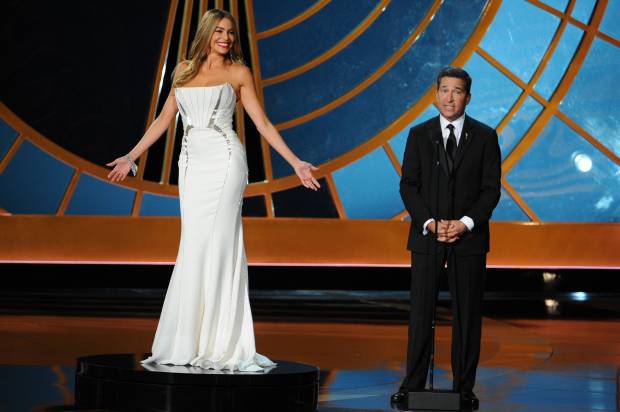 Vergara tries to justify her participation with a convoluted statement about feminine empowerment. However, her actions were of powerlessness. The skit was actually very sad. Very sad that in 2014 the show, the Academy and its producers do nothing to address the problems of inequality in the media industry. On the very contrary, the entire skit is in fact a demonstration of the abuse of power from a non inclusive system. It is the abusers lack of imagination and lack of empathy to continue to perpetuate negative stereotypes in this day and age when we all know better. All humans deserve dignity and respect.  It is because we know better we must find ourselves worthy and demand better.

Situations like these are harmful because it promotes tolerance of prejudice by reinforcing negative stereotypes and prejudice toward the targeted person or group.  It is an attempt to maintain a non-prejudiced appearance and also to deny prejudice to themselves.

By reinforcing negative stereotypes and prejudice at the individual level, disparaging humor maintains cultural or societal prejudice as a means of social control allowing members of the dominant group in society to maintain their privileged position. This perpetuates power imbalances.

We must continue to hold them accountable and demand better from an industry made up of media conglomerates. This is what happens in an industry with no diversity.

The only way the media industry will change is to diversify their hiring at all levels from writers to producers to talent. Equal employment in positions of influence and power must become a requirement today for an industry with the power to control everything we see and hear in the media.

In this victim blaming society, we live in we must continue to demand answers of the gate keepers.

Why aren’t’ we seeing women of color receiving awards for positive portrayals?

Why are the majority of roles available to women of color to play maids or prisoners?  Think about the conglomerates responsible for labeling this as entertainment.

We may not get that apologym but we must demand change now by putting financial pressure on these media conglomerates.

By doing nothing you are condoning it. Your actions have impact. What YOU can do:

Bella Vida Letty is a regular contributor to LatinoRebels.com and one of the Original Rebeldes, having been with the group since the very beginning. In 2012 she was named one of the Most Powerful Latinas in Social Media by VOXXI. You can follow her on Twitter (@bellavidaletty) or read more about her on her blog, Bella Vida by Letty.